Around 50 bodies were discovered inside as many as four different storage vehicles over the past few days, the law enforcement officials said. The Andrew T. Cleckley Funeral Home, located on Utica Avenue in the Flatlands neighborhood, was using ice inside the trucks in an effort to maintain the bodies.

A neighboring business reported seeing liquid leaking out from the back of the trucks — presumably water from all the melting ice — and called 311, according to the senior police officials. Neighbors also had reported a foul smell emanating from the trucks. Dr. Fauci: “Connecticut Is In a Good Place” in COVID-19 Fight 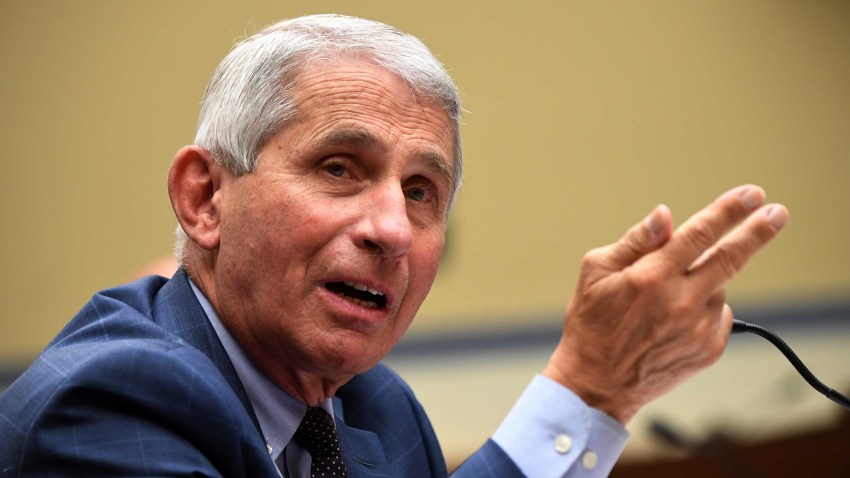 Investigators, some in Hazmat suits, had been seen going in and out of the funeral parlor and around the trucks since before noon on Wednesday. Police officials said the owner of the funeral home was using the trucks to store and move the bodies, as he struggled to deal with the overflow of bodies that remains a problem citywide.

Neighbors told NBC New York that the situation had been going on for quite some time, and Brooklyn Borough President called it "unacceptable" and "endemic of a larger problem" as he visited the scene.

"This is going to traumatize this entire community, that you had a U-Haul and a trailer full of bodies on a popular roadway. This is a very traumatizing impact that is going to go far beyond coronavirus," Adams said. "Can you imagine this truck if there's no shelving in here? Then you had someone's family members, lying on top of each other."

The bodies were transferred to a larger, refrigerated truck later on Wednesday. Sources said the owner had been waiting on a refrigerated truck, but it was late on arrival, and used the U-Haul trucks as a last resort.

Funeral homes, cemeteries, hospitals, morgues — any businesses that handle after-life care throughout the city and region have all repeated the same issues since mid-March: There is just too much demand to handle. Families and officials of those who have lost friends, family and loved ones have said it's not uncommon for it to take two or three weeks to get a body removed and ultimately buried or cremated — whether they died from COVID-19 or otherwise.

In Brooklyn and Queens especially, where the virus has hit particularly hard, funeral homes have been overwhelmed with more bodies than they can handle.

Given the circumstances and unprecedented dilemma facing the business, the owner is not facing any criminal charges — but did receive two citations from the city's Department of Health, senior law enforcement officials told NBC New York. The owner also had the appropriate paperwork for all the bodies found in the trucks, an NYPD official said.

The New York City Medical Examiner's office said that it has held weekly calls with licensed funeral directors throughout the state to share information, answer questions and get feedback regarding the at-time overwhelming demands. It was not immediately clear if they had been in touch with the funeral director in question, however.

They also launched a new portal for funeral homes to track bodies of deceased coronavirus victims, and have received support from the Air National Guard, Army National Guard and the Department of Defense to help with the workload.

Adams said he will be convening a bereavement committee on Monday, where they plan to discuss this incident and demand the city do better for those who have died from COVID-19.

"One funeral director told me, he said 'Eric, I've been doing this for 40 years and I never cried throughout my entire 40 years. I left one of the trailers in tears, I couldn't believe what I was seeing happen to human remains.'"