The U.S. surgeon general says that Americans should brace for levels of tragedy reminiscent of the Sept. 11 attacks and the bombing of Pearl Harbor, while the nation’s infectious disease chief warned that the new coronavirus may never be completely eradicated from the globe.

Earlier Sunday, Surgeon General Jerome Adams told CNN, "This is going to be the hardest and the saddest week of most Americans’ lives, quite frankly."

Adams called on governors who haven't issued statewide stay-at-home orders to combat the spread of the coronavirus to at least "give us a week" of restrictions.

Asked for his message to governors who haven't yet issued such drastic orders, Adams called on them to follow the administration's guidelines, which include measures like avoiding social gatherings and discretionary travel.

"This is going to be our Pearl Harbor moment, our 9/11 moment, only it’s not going to be localized," said Adams, the nation's top doctor. "It’s going to be happening all over the country. And I want America to understand that."

Those were some of the most grim assessments yet for the immediate future and beyond. But hours later, President Donald Trump and Vice President Mike Pence tried to strike more optimistic tones, suggesting that hard weeks ahead could mean beginning to turn a corner.

"We’re starting to see light at the end of the tunnel," Trump said at a Sunday evening White House briefing. Pence added, "We are beginning to see glimmers of progress."

The president also insisted that both assessments from his administration — they came within 12 hours of each other — didn't represent an about-face or were even “that different."

"I think we all know that we have to reach a certain point — and that point is going to be a horrific point in terms of death — but it's also a point at which things are going to start changing," Trump said. "We're getting very close to that level right now."

The president added that he thought the next two weeks "are going to be very difficult. At the same time, we understand what they represent and what that time represents and, hopefully, we can get this over with." 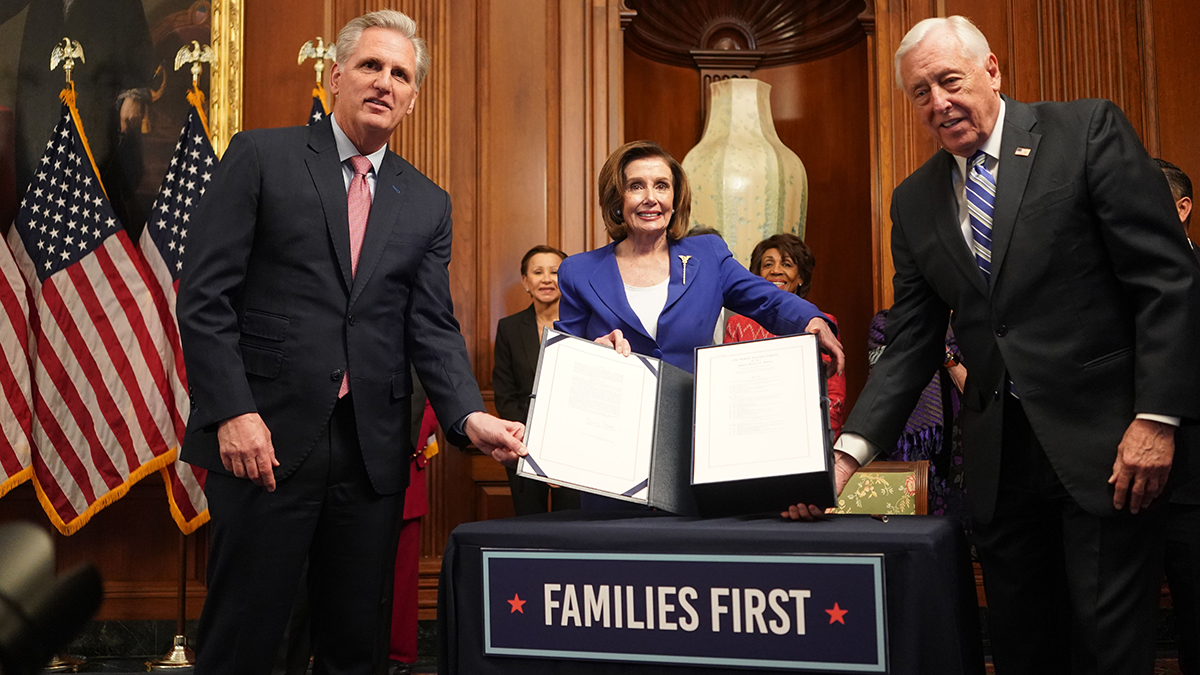 Falling Through the Cracks: Many Americans Won't Get Coronavirus Checks 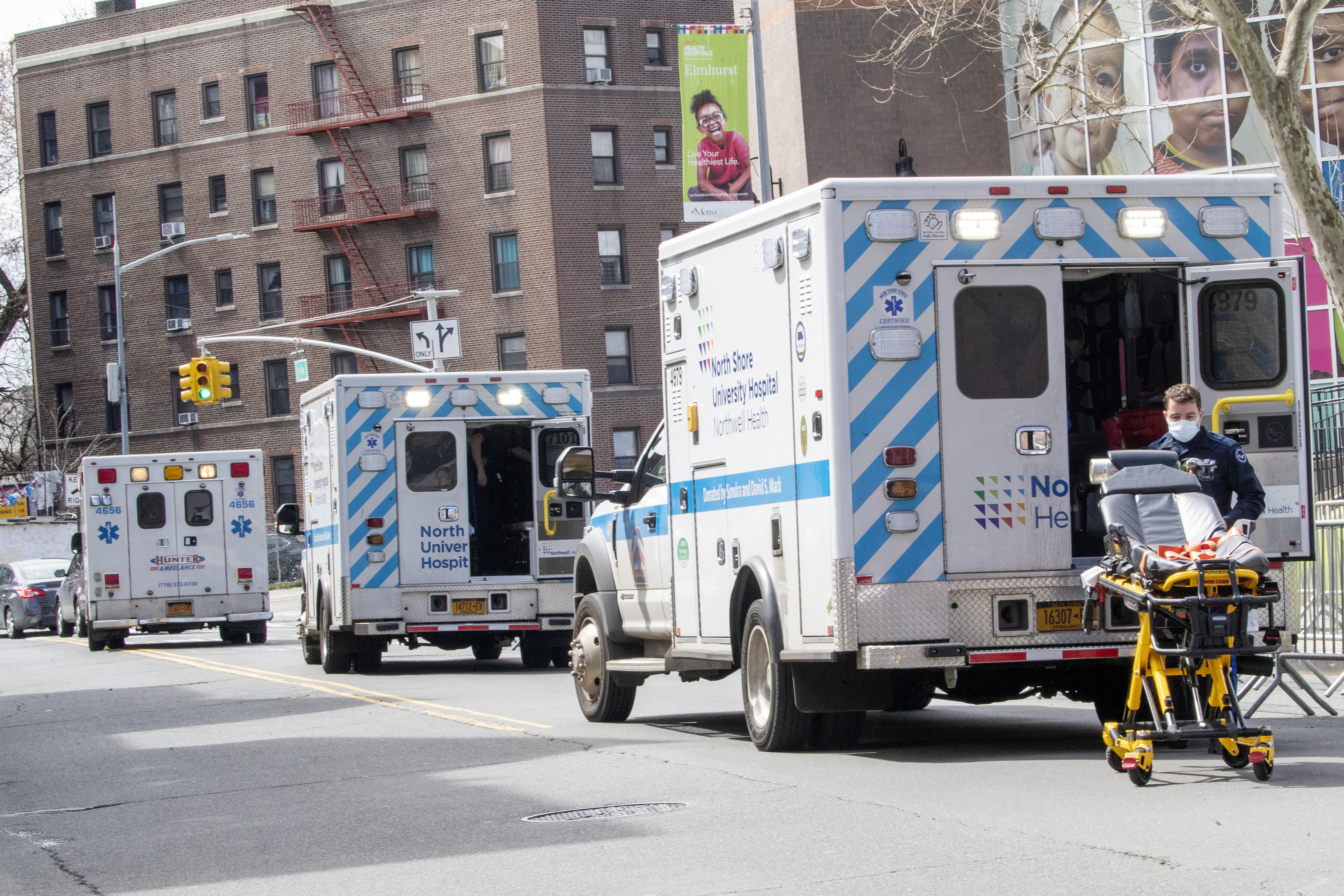 Still, Trump's own briefing also struck a somber tone at times. The president offered some of his most extensive comments to date to the families of those killed by the virus, urging the nation to pray for them and "ask God to comfort them in their hour of grief."

"With the faith of our families and the spirit of our people and the grace of our God we will endure," the president said. "We will overcome."

The number of people infected in the U.S. has exceeded 337,000, with the death toll climbing past 9,600. More than 4,100 of those deaths are in the state of New York, but a glimmer of hope there came on Sunday when Democratic Gov. Andrew Cuomo said his state registered a small dipin new fatalities over a 24-hour period. Still, Louisiana Gov. John Bel Edwards said his state may run out of ventilators by week's end.

Former Vice President Joe Biden suggested his party's presidential nominating convention, already pushed from July into August because of the outbreak, may have to movefully online to avoid packing thousands of people into an arena in Milwaukee.

Biden has all but clinched his party's presidential nomination and held an online town hall from his home in Delaware at the same time Trump was addressing reporters. His tone was far less confrontational than Trump, who clashed with reporters and criticized Democratic Illinois Gov. J.B. Pritzker as being demanding and complaining while having "not performed well."

Biden sought to be uplifting and almost grandfatherly, taking questions from children with his wife. But he also said the president "has been awful slow" to use the powers of his office to compel private companies to make protective equipment for doctors and nurses, adding that "we should be much more aggressive."

Trump angrily deflected questions regarding the slow pace of the federal government’s response to the pandemic, praising federal officials he has elevated in recent weeks to coordinate the distribution of hard-to-find supplies.

For most people, the virus causes mild or moderate symptoms, such as fever and cough that clear up in two to three weeks. For some, especially older adults and people with existing health problems, it can cause more severe illness, including pneumonia, and death.

Also Sunday, Dr. Anthony Fauci, director of the National Institute of Allergy and Infectious Diseases, said the toll in the coming week is "going to be shocking to some, but that's what is going to happen before it turns around, so just buckle down."

Dr. Anthony Fauci discusses how the attention of scientists turns to containment once mitigation is complete.

Fauci said the virus probably won’t be wiped out entirely this year, and that unless the world gets it under control, it will "assume a seasonal nature."

"We need to be prepared that, since it unlikely will be completely eradicated from the planet, that as we get into next season, we may see the beginning of a resurgence," Fauci said. "That’s the reason why we’re pushing so hard in getting our preparedness much better than it was."

The Defense Department released new requirements that all individuals on its property "will wear cloth face coverings when they cannot maintain six feet of social distance in public areas or work centers." That is in compliance with new federal guidelines that Americans use face coverings when venturing out.

Trump had said previously that he's choosing not to wear a face mask and scoffed at the idea of using one while answering questions as he held news briefings like Sunday night's.

"I would wear one," he said, but only "if I thought it was important."