Two Months Ago an Assisted Living Home Went Into Lockdown. This Weekend it Emerges — COVID Free

The staff of the Shady Oak Assisted Living residence in Bristol, Connecticut, are heading home for the first time since mid-March

More than two months after staff at Shady Oaks Assisted Living in Bristol, Connecticut, moved onto the property to keep residents isolated from the coronavirus, the home is opening up for the first time. It remains COVID-free, according to the owner.

More than 70% of Connecticut’s COVID-19 deaths were of senior home residents, but as the virus surged through the area, Shady Oaks had no infections among its 35 residents or its on-site staff , said the owner, Tyson Belanger. He credits what he called “bubbling up,” as in enclosing the home in a protective wrap.

"COVID-19 is still coming for our home," Belanger, a former Marine who served in Iraq, said in an email. "We are not 'safe' or 'normal' yet, but from my five deployments as a Marine infantry officer, I learned the importance of cherishing happy milestones during long campaigns.  Our home just fought and won a two month battle against COVID-19 entering our home."

The last of the 17 staff members who had been living at Shady Oaks are to return home on Sunday and will again commute to work.

“Our heroic caregivers saved lives and prevented a catastrophe for our home," Belanger wrote.

As of May 27, four of five nursing homes in Bristol had a total of 248 confirmed or probable cases of COVID-19 among residents, he said. Fifty-nine had died. Across Connecticut 78% of Connecticut’s nursing homes and 53% of its assisted living residences had reported cases, he wrote. 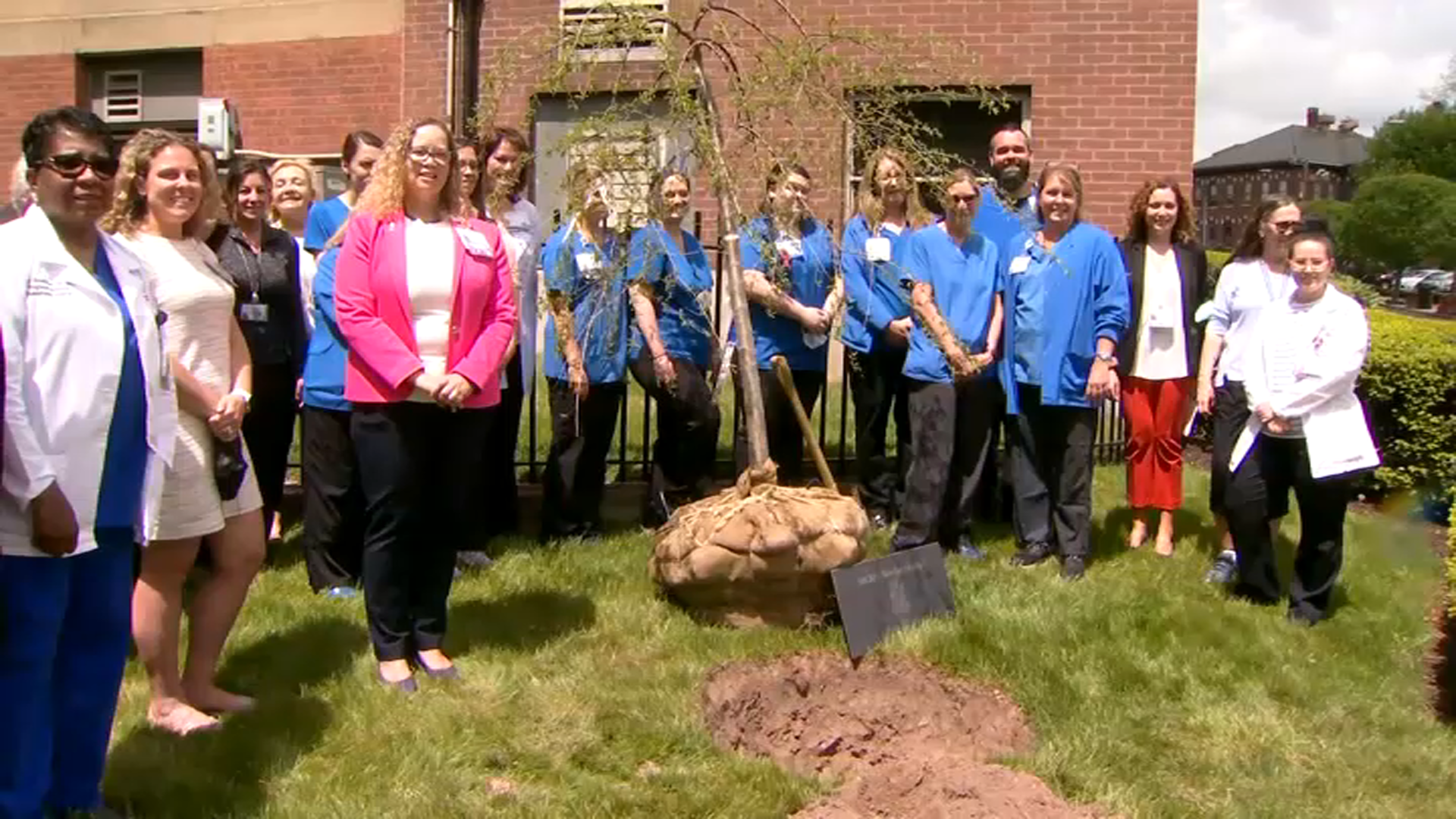 coronavirus in connecticut 15 hours ago

The two months reprieve at Shady Oaks gave Belanger time to arrange for tests for the staff and KN-95 respirators for their safety.

The pandemic is still killing —101,000 people in the United States and 360,000 worldwide — but totals for this country are headed down. Some regions that were hit hardest have cut the numbers of cases and deaths and have begun allowing businesses to reopen, among them New York and New Jersey. In other areas, among them Alabama, California, North Carolina and Wisconsin, the number of cases are rising.

Most of Connecticut is seeing a downward trend. As of Thursday the number of patients hospitalized dropped by 36 and new cases stood at 271, new deaths at 23, according to Gov. Ned Lamont’s office.

The Centers for Medicare & Medicaid Services (CMS) issues infection control violations for things like staff working with unwashed hands or improperly cleaning equipment after use, such as glucometers.

Source: NBC analysis of data from the Centers for Medicare and Medicaid Services and state health departments. Note: The analysis looked at CMS-administered nursing homes that have reported at least one coronavirus-related death, either probable or laboratory confirmed.
Credit: Amy O’Kruk/NBC

The state started its first phase of reopening on May 20, lifting restrictions on outdoor dining, museums and zoos, outdoor recreation and retail stores and malls. Hair salons, barbers and other businesses are scheduled for June 1.

Belanger's family has owned the assisted living home for 44 years and both of his grandmothers have lived there. He did not expect to take it over -- he went to Yale University, served three tours in Iraq as a Marine infantry officer and earned a Ph.D. in political science from Harvard University -- but when his father's health worsened in 2016, he bought the home and moved in next door.

When the coronavirus started its sweep through the Life Care Center of Kirkland, Washington, in March, eventually leading to 37 deaths, Belanger began waking up at night. He knew that his home was not ready, that any infection could race through the vulnerable residents. He began requiring temperature checks of the staff in early March, but when he learned of asymptomatic cases, he realized that was not sufficient. Neither enough testing nor the KN-95 masks the staff would need to stop the virus were available. The home would have to “bubble up,” he decided.

The idea seemed extreme, perhaps not even possible, but he thought it was necessary, so he pushed hard to convince staff, and on March 22, seventeen caregivers moved into Shady Oaks and into trailers that he rented and placed the property.

"Our staff worked 60 to 80 hour weeks, endured unique stresses from in-close living, and really missed being home with their families," he wrote.

Faith Brouker left her husband, her daughter, and her own mother at home to live in one of the furnished campers that Belanger brought in, NBC Connecticut reported earlier this month.

What did she think when Belanger first proposed his plan?

"Crazy with a capital 'C,'" the 48-year-old nurse said. But she knew that she would not be transmitting the virus, that her family would be safe, and that she would be protecting those who depended on her.

The more than two months at the home were challenging but rewarding, she said. She got much to be closer to the residents, with whom she spent many more hours than she would have otherwise and who also were not able to see their families.

"Everybody got lots of extra loving from us," she said. "We needed it and they needed it."

The Shady Oaks home now has 3,500 KN-95 respirators on hand for staff and residents, according to Belanger. At $4 a mask, they are affordable and are comfortable enough for staff members to wear them all day.

“These do well to stop droplets and filter vapors,” Belanger wrote.

The home also now has access to testing, which is key to detecting people who are asymptomatic. COVID tests are expensive but increasingly accurate, quick and available, Belanger said. The home has partnered with laboratories so that it can test its staff and residents frequently.

One additional precaution it will take is to require any COVID positive residents to recover at hospitals or recovery homes until they are no longer contagious. Connecticut opened four nursing home recovery centers at the end of April.

Nursing homes across the country have been especially hard hit by the pandemic.  Besides Connecticut, Massachusetts, New Jersey, Pennsylvania, Rhode Island and other states have reported that more than half of their deaths have been nursing home residents. In many cases, federal inspections found that the nursing homes had had earlier problems controlling infections. An NBC analysis of data available earlier in May found that 61% of Connecticut’s nursing homes that reported confirmed and suspected COVID-19 deaths had been cited for violations in recent years by the Centers for Medicare and Medicaid Services. Other states report similar percentages and higher -- even as death tolls, methods of reporting them and transparency among states are changing quickly in the midst of the pandemic.

“The nursing home industry was a tinder box,” Mike Dark, an attorney with the nonprofit California Advocates for Nursing Home Reform, told NBC. “This virus is the match that set it off.”

Belanger said that the homes had not had enough testing available to them to protect their residents or caregivers.

“It’s not fair to them because they can’t fight what they can’t see and they can’t detect,” he said then, and he continues to believe that is true.

At the beginning of May, the American Health Care Association asked for $10 billion in federal assistance for nursing homes from the CARES Act the way the government had designated funds for hospitals. In a later statement, the association reiterated that plea to highlight assisted living homes.

“Given the gravity of the situation we are facing with this deadly virus and its impact on our vulnerable residents, long term care facilities require additional support and funding from state and federal governments to reduce its spread,” it said. “Notably, assisted living communities have yet to receive any direct aid, despite also serving vulnerable seniors. While building on support received from (Health and Human Services), we are asking for additional consideration for all long term care facilities, whether it be in regard to additional testing, personal protective equipment, or funding.”

The steps Belanger took were expensive. The certified nursing assistants earned $15,000 a month, and the nurses, $20,000 a month.  He said he spent about $250,000 from his personal savings on payroll and supplies, which is about $7,000 a resident. The federal Payroll Protection Program added another $343,000, and the home received donations, of about $215,000 in cash and other assistance. His mother was one 100 people who gave.

But as much as he and the staff were able to protect the Shady Oaks residents, he wishes that he had convinced government officials to provide more help for other residences so they could have followed his model. That he failed to inspire government intervention is his biggest regret, he said.

"It did not have to be this way," he said. "COVID-19 is a cruel reality, but I feel we could have done more to avoid it becoming a tragedy.  Even now, we could and should be doing much more to protect senior home residents and caregivers."