As lockdowns ease across the United States, Americans are getting out of the house to celebrate the unofficial start of the summer. President Donald Trump himself marked Memorial Day weekend with a round of golf -- his first in more than two months.

However, with the ongoing coronavirus pandemic, this holiday weekend certainly is unlike years past. Many restaurants and bars are takeout only. Restrictions are in place at parks and beaches. Concerts and special events have been canceled.

Those seeking some normalcy headed to the beach. However, Dr. Deborah Birx, coordinator of the White House coronavirus task force, appeared on U.S. Sunday talk shows to voice her concern over the crowded beaches.

The CDC continues to recommend that people stay home, avoid crowds and connect with family and friends by phone or video chat. But for the tourism and hospitality industry hit hard by the pandemic, there is modest hope that the holiday weekend will mark the start of a return to something resembling recovery.

The U.S. has confirmed 1.6 million cases and over 98,000 deaths from the coronavirus, according to Johns Hopkins University. 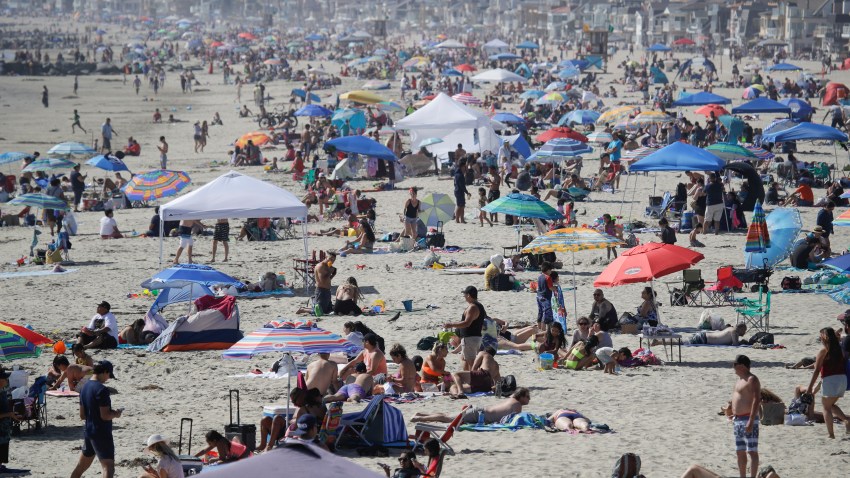 US Faces a Memorial Day Like No Other; Greek Islands Reopen

1st Deadlines for Laid-off Workers to Get Health Insurance

A ban on foreign travelers arriving in the U.S. from Brazil due to the surge in coronavirus cases there will now take effect late Tuesday, two days earlier than previously announced.

The ban had been set to go into effect late Thursday. The White House announced the change Monday without explanation.

Brazil is second to the U.S. in the number of confirmed COVID-19 cases, according to a tally from Johns Hopkins University, and has seen cases surge in recent days.

The White House cited Brazil’s status as Latin America’s hardest-hit country on Sunday when it announced the ban, saying it would prevent additional infections in the U.S.

Foreign nationals who have been to Brazil in the two weeks before they attempt to enter the U.S. are to be turned back under the ban. The ban does not apply to U.S. citizens or legal permanent residents, and their spouses, parents or children.

A man in U.S. Immigration and Customs Enforcement custody died from COVID-19 complications on Sunday, the agency said in a news release.

Santiago Baten-Oxlag, 34, who was awaiting departure to his native Guatemala, died at a hospital in Columbus, Georgia, after being transferred from the Stewart Detention Center in Lumpkin, Georgia. He had been receiving care at the hospital since April 17.

The preliminary cause of death was “complications related to COVID-19,” according to the news release. It is unknown if Baten-Oxlag had any underlying medical conditions.

Baten-Oxlag is the second known detainee to die from COVID-19 while in ICE custody. In early May, a 57-year-old man from El Salvador died from COVID-19 at a San Diego-area hospital while in ICE detention. More than 1,200 detainees have tested positive for COVID-19 in ICE facilities, according to data on the agency’s website.

Crowds Pack Beaches Across US on Memorial Day Weekend Despite Virus

Hundreds of people gathered at a popular Florida beach boardwalk and were seen partying and dancing despite social distancing restrictions imposed by the state to combat the coronavirus pandemic, authorities said Sunday.

Police responded, attempting to disperse the crowds along a beachside road in Daytona Beach that were there for an annual gathering that was not authorized by the local government this year, NBC Miami reported.

Some fights broke out during the afternoon and police said a shooting also was reported outside a nearby convenience store, with two people taken to the hospital with gunshot wounds and four injured by shrapnel. Officers were not involved in the shooting.

“We got slammed. Disney is closed, Universal is closed. Everything is closed so where did everybody come with the first warm day with 50% opening? Everybody came to the beach,” Volusia County Sheriff Mike Chitwood said at a Sunday news conference.

The Volusia County Sheriff’s Office released helicopter images showing the large Memorial Day weekend crowds surrounding a car outside a beachfront mall as a man stood on the sunroof and other men hung out the windows throwing money around and blocking traffic.

The Volusia County Sheriff’s Office released helicopter images showing the large Memorial Day weekend crowds surrounding a car outside a beachfront mall as men stood on the sunroof and out the windows throwing money around and blocking traffic.

On the other side of the country, many Southern California beaches were open only for swimming, running and other activities. Sunbathing and group activities such as volleyball were prohibited, NBC LA reported.

"People are definitely taking advantage of the bike paths," she said. "Everyone's very happy that those are open again."

Volunteers acted as "goodwill ambassadors" to remind beachgoers to keep moving and not plant chairs and coolers in the sand, Mooradian said. The county partially opened parking lots at popular beaches including Zuma, Dockweiler, Will Rogers, Malibu Surfrider and Torrance.

The Santa Cruz County Sheriff’s Office warned that its beaches would be closed except for a few hours in the morning and strongly discouraged tourism from the San Francisco Bay Area, Central Valley and Sacramento areas.

Nearly two weeks ago the White House urged governors to ensure that every nursing home resident and staff member be tested for the coronavirus within 14 days.

It’s not going to happen.

A review by The Associated Press found that at least half of the states are not going to meet White House’s deadline and some aren’t even bothering to try.

Only a handful of states, including West Virginia and Rhode Island, have said they’ve already tested every nursing home resident.

Many states said the logistics, costs and manpower needs are too great to test all residents and staff in a two-week window. Some say they need another week or so, while others say they need much more time. California, the most populous state, said it is still working to release a plan that would ensure testing capacity for all residents and staff at skilled nursing facilities statewide.

And still other states are questioning whether testing every nursing home resident and staff, regardless of any other factors, is a good use of time and money.

"At this time it would be fairly useless to do that," said Nebraska Chief Medical Officer Dr. Gary Anthone, adding that the state would have to repeat the tests almost daily to get more than a snapshot in time, and the state doesn’t have the capacity when there are others who need to be tested.

Bay Area Republican leaders have confirmed that the party is suing California over Gov. Gavin Newsom's plan to send every registered voter a mail-in ballot, claiming that the system opens itself up to inaccuracy and fraudulent voting.

The lawsuit was filed in United States District Court for the Eastern District of California. It claims that the state's order is unlawful because it deprives residents of their constitutional right to vote by making voter fraud inevitable.

Jesse Melgar, Newsom's press secretary, responded to the lawsuit by saying that vote-by-mail will actually expand people's right to vote.

California joins a growing list of states considering mail-in voting as an alternative to in-person voting during the coronavirus pandemic.