As panicked Americans cleared supermarkets of toilet paper and food last spring, grocery employees gained recognition as among the most indispensable of the pandemic's front-line workers.

A year later, most of those workers are waiting their turn to receive COVID-19 vaccines, with little clarity about when that might happen.

A decentralized vaccine campaign has resulted in a patchwork of policies that differ from state to state, and even county to county in some areas, resulting in an inconsistent rollout to low-paid essential workers who are exposed to hundreds of customers each day.

“Apparently we are not front-line workers when it comes to getting the vaccine. That was kind of a shock,” said Dawn Hand, who works at a Kroger supermarket in Houston, where she said three of her co-workers were out with the virus last week. She watches others getting vaccinated at the in-store pharmacy without knowing when she'll get her turn.

The Biden administration says it is working to streamline the distribution process and send more doses to states each week.

Texas is among several states that have decided to leave grocery and other essential workers out of the second phase of its vaccination effort, instead prioritizing adults over 65 and people with chronic medical conditions.

Focusing on older adults is an approach many epidemiologists support as the most ethical and efficientbecause it will help reduce deaths and hospitalizations faster. People over 65 account for 80% of deaths in the country, according to the Centers for Disease and Control Prevention.

“Our main goals with vaccines should be reducing deaths and hospitalizations,” said William Moss, executive director of the International Vaccine Center at Johns Hopkins University School of Public Health. “In order to do that, we need to begin vaccinating those at the highest risks.”

But many grocery workers have been surprised and disheartened to find that they've been left out of such policies, in part because a CDC panel had raised their expectations by recommending the second phase of the vaccine rollout — 1B — include grocery and other essential employees.

Even when grocery workers are prioritized, they still face long waits. New York opened up vaccines to grocery workers in early January, along with other essential employees and anyone 65 and over. But limited supply makes booking an appointment difficult, even more so for the workers who don’t have large companies or unions to advocate for them.

Edward Lara had to close his small grocery store — known as a bodega — in the Bronx for 40 days when he and his employees contracted the virus last spring. He has tried for weeks to get a vaccine appointment and finally figured out he could register through the website of a network of health care providers, which will notify him when a slot opens.

Lara’s father-in-law died of the virus in March. His mother-in-law died in November. Last week, a friend who manages his bodega’s insurance policy also died. And a cousin in New Jersey got the virus for a second time, leaving him terrified it could happen to him.

“Nothing to be done. Cross my fingers and hope that God protects me,” Lara said after registering for the waitlist. 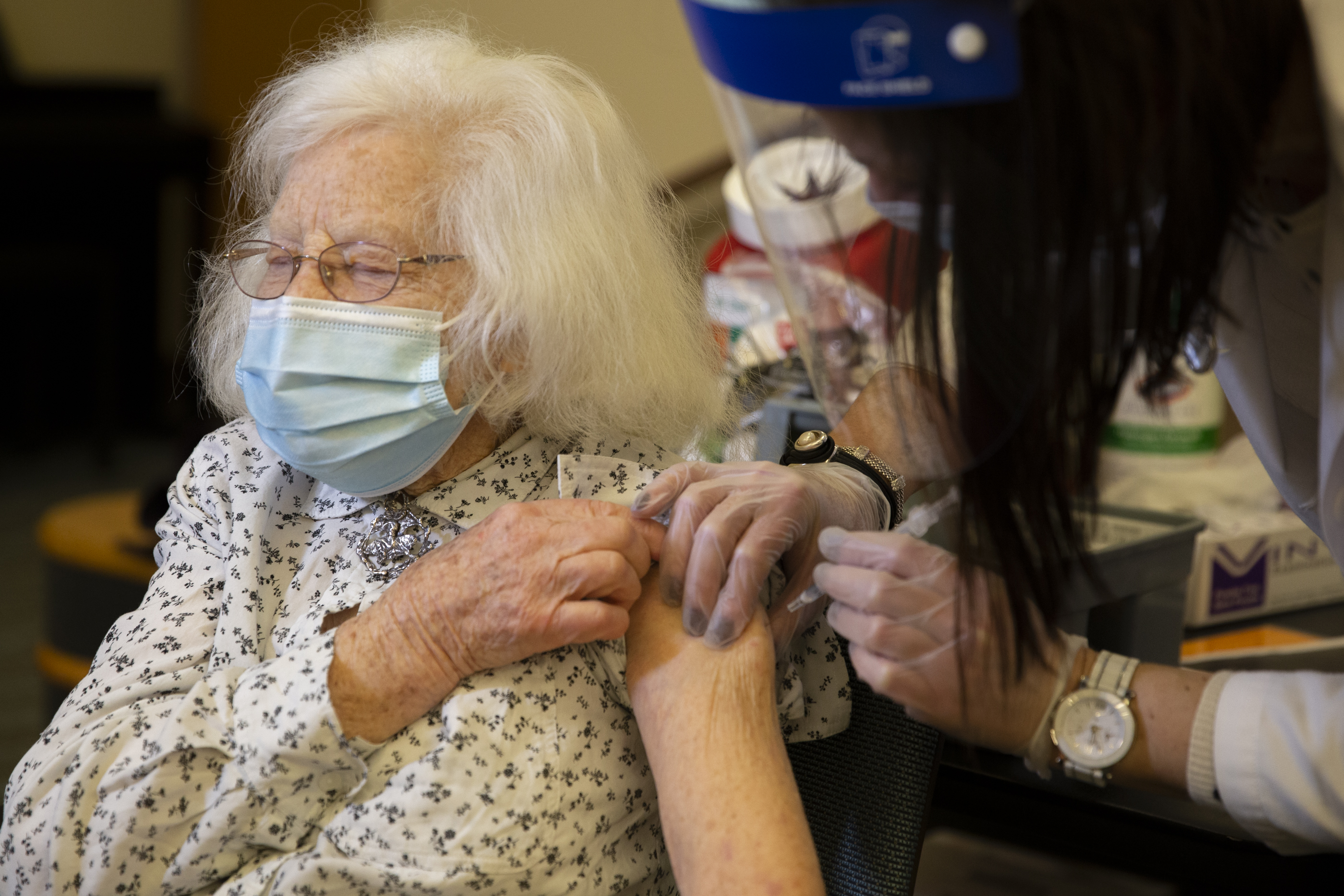 Holocaust Survivors Getting Vaccine: ‘Life Is a Gift, Even When It's Poorly Wrapped'

Only 13 states are currently allowing grocery workers to sign up for vaccines, according to the United Food and Commercial Workers union, which represents 1.3 million U.S. grocery, meatpacking and other front-line workers.

Some states are still working through an initial phase that prioritizes health workers and nursing home residents. Many states have divided the second phase into tiers that put grocery workers lower than others, including people 65 and over, teachers and first responders. Eleven states have no clear plan for prioritizing grocery workers at all, according to research from United 4 Respect, a labor group that advocates for workers at Walmart, Amazon and other major retailers.

At MOM’s Organic Market, a 21-store grocery chain in the Mid-Atlantic region, chief culture officer Jon Croft initially thought the company’s 1,500 workers would be vaccinated by the end of January. He now thinks it will be more like March or April. The company has only been able to pre-register workers from two stores in Maryland and two in Virginia.

“Folks feel they deserve to have an opportunity to be vaccinated having been on the front line,” Croft said. "The politicians and the health departments have been singing the praises of grocery workers but now they have been silent.”

President Joe Biden heads to Milwaukee for his first trip out of Washington since taking office. He'll answer questions at a town hall, with a heavy focus on the COVID-19 pandemic. With new cases declining and death rates improving, there are still serious challenges.

Major food retailers say they are doing their part to get their workers vaccinated. Kroger, the nation’s largest grocery chain, said it has been vaccinating employees in Illinois ever since they became eligible, but grocery workers aren’t yet eligible in most of the jurisdictions in which the company operates. Target and Walmart also said they would offer their workers vaccines at their own pharmacies as soon as they are eligible.

Kroger, Trader Joe's, Target and online delivery service Instacart have offered bonuses or extra paid time off for workers who get the vaccine.

When grocery chain Lidl got word from Suffolk County on Long Island that it would be given appointments for its local workers, it immediately contacted those who it knew to be at highest risk. So far, more than 100 employees in Suffolk County have now gotten shots.

Joseph Lupo, a Lidl supervisor who fell ill with the virus in March, is one of them.

“I never ever want to get COVID again, or see anybody else get it,” said Lupo, 59.

But for many grocery workers, the realization that they won’t be eligible any time soon adds to the sense of being expendable. They have fought a mostly losing battle for hazard pay, which a handful of companies offered in the spring but ended despite multiple resurgences of the virus.

A year into the pandemic, some shoppers still refuse to wear masks and managers often don’t force them to follow the rules.

“There are the people who come in wearing a mask halfway down or take it off as soon as they get in the door,” said Drew Board, who makes $13.50 an hour handling grocery pick-up orders at a Walmart in Albemarle, North Carolina. “I ask them politely to pull it back up and they do and then take it back down when they walk away.”

Francisco Marte, president of the Bodega and Small Business Association of New York, said he tells his own workers not to risk their lives confronting shoppers who won't wear masks. In August, an angry customer slashed thousands of dollars worth of goods at a Bronx bodega after being asked to wear a mask.

“It should be the job of the police,” said Marte, whose organization handed out 150,000 free masks in the spring when they were scarce. “I tell the employees, keep your distance and wear your mask but don’t put yourself in danger because we are the ones who lose.”

When you finally get your COVID-19 vaccine, you may be tempted to celebrate by posting a pic of your vaccine card on social media. Resist that urge. LX Host Nik Z talked with Sandra Guile of the International Association of Better Business Bureaus about how this could make you vulnerable to identity theft and other scams.

Marte said he has been lobbying local officials to set aside vaccine appointments for bodega workers, many of whom are unaware they are eligible. He hopes that the recent opening of a large vaccination site at Yankee Stadium will make access easier.

The virus, meanwhile, continues its march through grocery stores.

Over the past two months, there have been 137 COVID-19 outbreaks in Southern California grocery stores, and 500 Houston grocery workers have been infected, according to the UFCW. The union knows of 124 grocery workers who have died since the start of the pandemic.

Debbie Whipple, a scan manager at a Kroger in Fayetteville, Georgia, said her union, UFWC Local 1996, doesn't expect Georgia to open vaccines to grocery workers until April at the earliest.

“We have to be here, just like a fireman and a policeman, because people need food,” said Whipple, who described the frustration of watching customers routinely walk around barefaced and decline offers of free masks. “We should be getting the vaccine.”