Animal shelters across the U.S. are filled with healthy older dogs and cats in need of a home

Alba and Steven King never thought of adopting a cat — they'd always wanted a dog — so it certainly never crossed their mind to adopt an older feline companion.

But when they went to a New York City shelter in November 2014 to check on a sick stray they had brought in a few days earlier, they ended up taking home a 10-year-old cat who meowed his way into their hearts.

“When we walked in the room where there was a wall of cages, he came over to the door of his cage and was meowing at us,” Alba King, 27, said of the cat. “He was the only one trying to get our attention."

The couple felt an immediate connection with Andrew, whom they renamed Captain Reynolds after a character in a TV series “Firefly,” and knew their apartment in Queens allowed pets. But when King found out the cat was 10, she immediately called her mom and brother to get their opinion on adopting an older cat. It's Take Your Dog to Work Day, Virtually 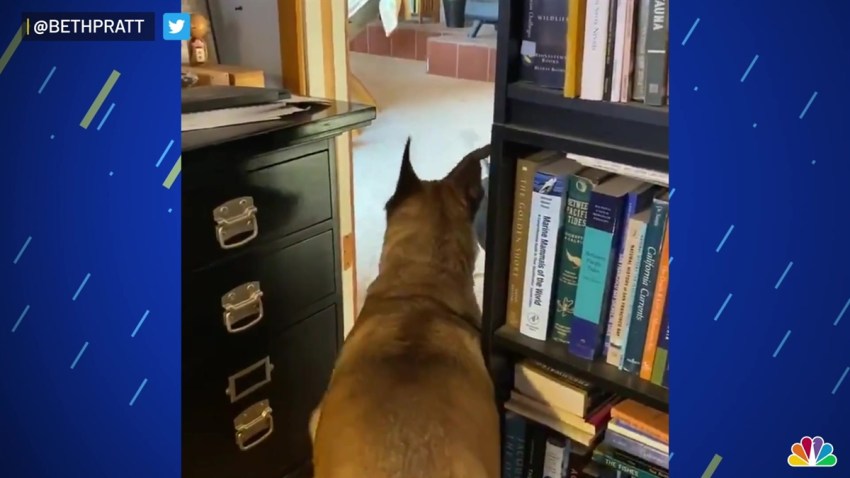 “The first thing they said to me was ‘why are you getting an old pet?’ That’s what everyone said to me,” she said.

King worried, too, that Captain Reynolds might get sick soon and die within a year. But the staff at Animal Care Centers of NYC in Brooklyn put her at ease and explained that a cat’s life expectancy is 15 to 20 years.

“I looked at him and then I realized that kittens are a lot of work, they are very playful and they change when they grow up, whereas with Captain Reynolds, what I was seeing is what I was getting,” said King.

Animal shelters across the U.S. are filled with healthy older dogs and cats in need of a home. Animal care professionals urge those thinking about picking up a pet from a local shelter to not look past older cats and dogs because they need families, too.

“Unfortunately, the older animals and seniors are often overlooked because people are excited to adopt puppies and kittens,” said Jessica Vaccaro, adoption manager at Animal Care Centers of NYC, which takes in more than 30,000 animals each year. “We hope to encourage people to come and see these wonderful, mature animals-- animals that are often already trained, often used to living in a household.”

Adopting an older pet is as practical as it is gratifying, experts say. There are fewer surprises with older pets because you’ll know their full-grown size, personality and grooming needs. They are often already trained and calmer than youngsters.

Older dogs are not necessarily “problem dogs” — they can end up at the shelter for a number of reasons, including their owner going through a job loss or move.

Elizabeth Hendrix, 67, of Manhattan, had been considering adopting a dog when her granddaughter sent her a photo of 13-year-old Max, a 91-pound Swiss mountain mix who ended up at the Animal Care Centers of NYC in Harlem because his owner was unable to care for him. When Hendrix went to meet Max, she brought him home the same day after he refused to go back in his cage at the shelter.

“He had a very sad look in his eyes, like 'why am I here?'” said Hendrix, who already had a 3-year-old terrier mix named Molly. “I couldn’t see him being euthanized; he needed to live out his final days as comfortable and as loved as possible.”

Hendrix said the benefit of adopting an older pet is that “they already have all their little problems out of the way: they’re already trained, housebroken, they don’t chew things up."

"The main thing is they just need to be loved,” she added.

She said less than one week after the adoption, Max became her instant companion, following her everywhere she went.

Not all senior pets are so lucky when it comes to finding a home. Cherie Wachter, vice president of marketing at the Humane Society of Broward County in Florida, said puppies and kittens there get adopted very quickly, but older pets linger in the shelter for weeks.

In June 2015, she had two 7-year-old-dogs, a little dog named Nacho and a shepherd mix named Roxy, available for adoption. She said they lived in the same household and were very attached, so they’d have to be adopted together. No one expressed any interest at that time, even though they were potty trained.

"I wish more people opened up their hearts and homes to mature pets,” she said.

Emily Huetson, animal welfare director at On Angel’s Wings in Crystal Lake, Illinois, also finds that older pets are a better fit for many families. She said qualities more typical of older animals, such as a calm demeanor and less destructive nature, often come up when the shelter asks potential puppy owners what qualities they are looking for in a pet.

"What they want is the qualities we have in our 8-year-old dogs," Huetson said.

She said the shelter encourages families with young children and seniors to adopt older pets since they are already trained. In addition to providing information about the dog's personality and history, she encourages families and children to meet and interact with the seniors.

"They just kind of sit there with sad eyes," said Huetson. "They don’t know why they're in the cage."

Many potential pet owners are worried that adopting an older pet can mean high vet bills, but experts say that is not always the case. Sometimes a shelter will have medical records that can help owners make an informed decision about possible health issues. Either way, experts recommend a full vet visit -- including a geriatric workup -- soon after the adoption is complete.

King learned that Captain Reynolds was allergic to some foods, so was put on a special diet that cost a little more every month. He also had to have 16 of his teeth taken out because he spent so many years as a street cat without dental care and was left with only one fang. King discussed the potential costs of teeth extraction with a vet and, since it wasn't a life-threatening condition, she was able to save up for a few months to cover the $373 bill. She said a kitten “could’ve grown up to have the same problems just maybe a little later.”

At Operation Kindness in Carrollton, Texas, a permanent foster care program eliminates concerns over vet bills. Anyone who adopts an older pet from the shelter can return there to get medical care for their pet for free, according to CEO Jim Hanophy.

“That takes worry off the table for some people,” he said. “People underestimate the length of time an animal can live. If an animal is healthy when they are 12 they will probably be healthy till the end."

For King, Captain Reynolds’ age is just a number and she said from now on she’ll adopt older pets.