Middletown's police chief is defending his decision to remove the "Thin Blue Line" and "Blue Lives Matter" flags from his department in the wake of the national outcry over the death of George Floyd.

The decision, made in consultation with the mayor, has been met with both praise and criticism.

In a lengthy post Thursday, Chief William McKenna explained his reasoning behind the decision, saying that while the flags are seen as a symbol of the honor, devotion and sacrifice of police officers in law enforcement circles, he acknowledged that he's become aware that they are seen as symbols of division and oppression by others.

"...the Thin Blue Line flag is, and quite frankly always, has been easily interpreted to represent honor and devotion to the career we chose. It is very significant and meaningful not only for us officers as individuals, yet for those who took the same oath years ago to serve the public. It serves as a sense of pride and commitment to a job in which sacrifices are made from the day you are sworn in. There are family sacrifices, friendship sacrifices and god forbid sometimes ultimate sacrifices," he wrote.

He said he spoke with community leaders about the negative view of his cherished symbols, and considered the words of protesters at a recent event in his city when making the decision.

"I did research and read that that the symbol has at times been used and embraced by white supremacist support. I heard some groups also look at it as a sign of oppression," he wrote.

"I then thought of Saturday night’s peaceful march on Main St. for George Floyd. If you weren’t there you may not relate, yet what I saw in the crowd was real. I saw tears, screams and lots of emotions that would take too long to explain. But the loudest thing I heard where the things being yelled in from the crowd. They were yelling “when will things change?”…'what have you done?' They yelled 'we need you to hear us.' 'Listen!' That stuck with me," he added. 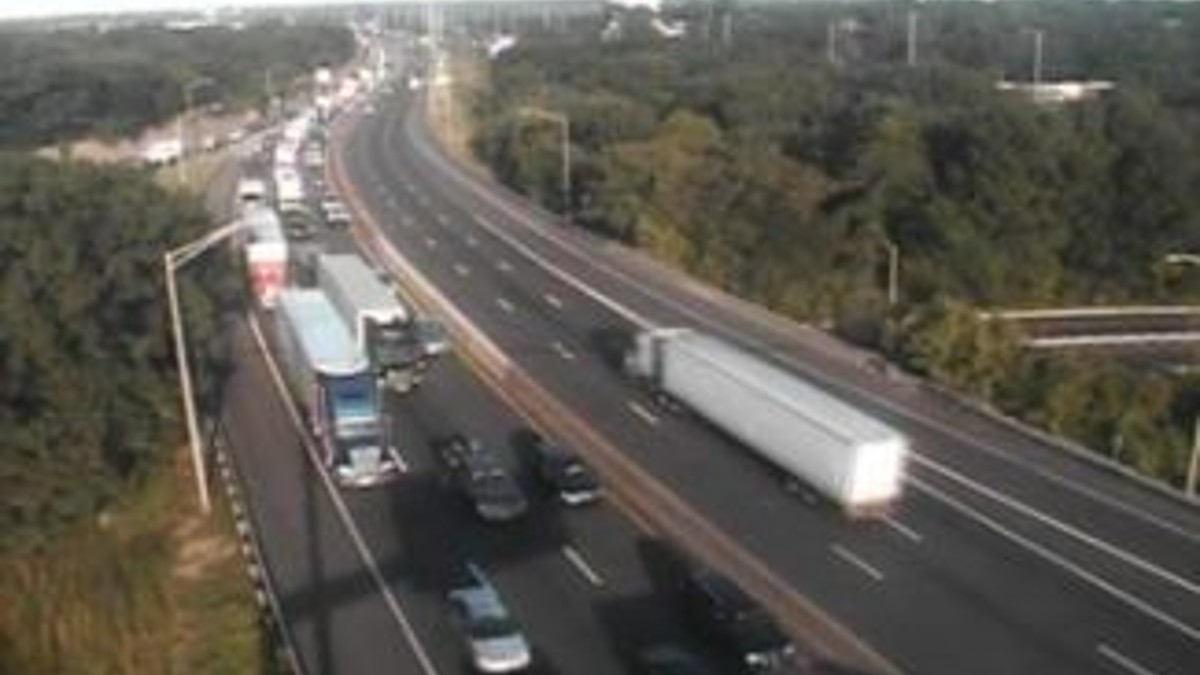 Crash Closes I-95 North in Milford

McKenna said while he disagrees with the negative interpretation of the flag, he understands that to some, it causes pain.

"I decided that this gesture may serve as a step to attempt to eliminate some trauma and tension during very emotional times," he said.

McKenna made it clear that he is proud of the work his department has done and that he hopes they can continue to work with the community to make it even better.

"I need you to understand that I made this decision because it was the right decision to make for us, at the right time, to show people that we are built to be role models and to be a part of our community and to move forward with getting better…building trust and taking the first step to show that we can listen and we can cooperate! I understand that many of you may disagree, which is your right. Yet I did this as a sign of strength for our department, not weakness. Reaching our hand out to those good people who are hurting right now is the right thing to do, not only for us…but for humanity," the statement continued.

You can hear the full statement at the bottom of the story.

COMMUNITY REACTION TO THE DECISION

Middletown Mayor Ben Florsheim explained a petition with more than a thousand signatures was submitted to the city calling for the flags to be taken down.

“I feel this is the time in our community to start listening to what the black and brown neighbors in our community are saying,” Kubie stated.  “These symbols have been co-opted by white supremacists and they are being used as dog whistles to support the impunity of officers who commit extrajudicial murder.”

When Kubie’s petition landed on Florsheim’s desk he approached chief about removing the flags.  Florsheim, a Democrat, said McKenna told him he’d already decided the flags had to come down.

“It is one thing to display something and it’s another thing to understand what it means to everybody,” said Florsheim.

The Chief’s decision drew criticism on social media.  One poster wrote: “I don’t see what is wrong with thin blue line flag. The line separates the innocent from the criminals.”

While another simply said, “#AllLivesMatter put it back up.”

“The thin blue line is a symbol of the police.  Their unity, their devotion for their job. It’s not anything derogatory,” said Elaine Kowaleski, whose son is a police officer. “Police lives do matter, like everybody else’s.”

Others in Middletown took the gesture as a positive step.

“I believe he made the right decision.  It’s a sensitivity to the situations we’re going through and also an awareness of what’s going on and just that we need to bring a calm to the storm,” said Rich Moore.

“We hope that will change something.  I think it’s a good idea,” retired firefighter Martin Leachman added.

“The thinking process behind it was pure.  When you do the right thing for the right purpose you always get the right outcome,” said Harvill of that Cross Street AME Zion Church.

Ed Ford, Junior a black Republican who sits on Middletown’s most diverse city council to date applauded the chief’s decision.

“I believe it was the right decision especially in this time where the black community is hurting and speaking out boldly against the patterns of injustice that we have experienced all over this country,” Ford said in a statement sent to NBC Connecticut News.

Deputy Minority Leader Anthony Gennaro, Senior, a veteran police officer, added in a statement,  “I am in agreement with the removing the thin blue line flag until we can come together with mutual understanding on the flag’s original intended meaning through conversations and collaboration with our community.”

MOVE DOESN'T SIT WELL WITH FAMILY MEMBER OF THE FALLEN

Hope Kasper said her cousin’s husband, Middletown Police Sgt. George Dingwall, died in the line of duty, after squad car crashed during a police pursuit in 2000.

“We were very shaken by that,” said Kasper who added that both her father and grandfather served as police officers.

Kasper said after Dingwall’s death a flag with the thin blue line symbol was hoisted over the police department in his honor.

A plaque still sits on the wall on Dingwall’s honor, but his cousin hopes those who called for the flags to be taken down will change their mind once they learn what she feels it truly symbolizes in this city.

“He gave his life for the citizens of Middletown,” she pointed out.

“I think those people have a right to be offended.  They should be offended that white supremacists have come in and they have stolen the symbol for them,” said Kubie. “These people deserve to have a symbol to show their love and support of community members who are good cops.”

"The situation with the flags absolutely don’t change anything about Sgt. Dingwall’s service or his memory. We will continue to honor him in Middletown," Florsheim added.

“I think the symbol right now is blue lives matter and if some other group has twisted and turned it I think there should be a better understanding,” Kasper said.

She added that there is a new petition circulating to get the flags hoisted back up.  She said on Friday that it already had more than 2,000 signatures.