A family from Southington was driving to the airport when the car in front of them hit a motorcyclist and kept driving. What they did next may have saved the man's life.

Carla Keim and her 19-year-old son Devan were traveling eastbound on Interstate 84 around 4:45 a.m. when they saw the crash.

From the passenger’s seat, Devan noticed a motorcycle on the right shoulder.

A few seconds later, he says a ford explorer sped by and collided with the motorcyclist.

“The car behind us ran into him,” said Tillotson. “The guy on the motorcycle went flying.”

Devan rushed out of the car to help the motorcyclist by using his belt to tie a tourniquet around the man's leg. 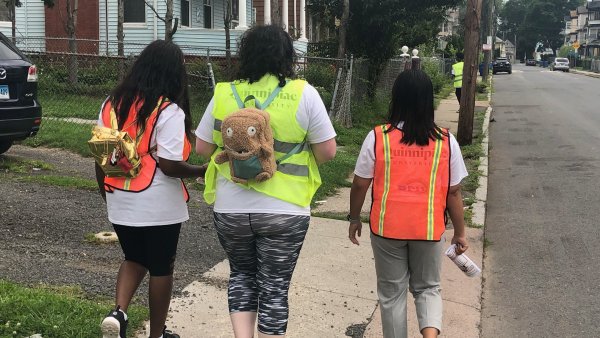 "We all worked together but it was Devan who had complete control of the scene," Keim said in a Facebook post.

State police arrived six minutes after the family called for help.  Troopers said the driver is 26-year-old Michael Rios.  According to the police report, investigators say Michael Rios sped off after the collision and abandoned the SUV, but was later arrested and taken into custody.

Keim said that her son kept the man alert by talking to him and applying pressure to the wound.

"I begged Devan to get out of the road and let me take over but he refused. 'Mom, I've got it,'" Keim said.

As the ambulance left with the motorcyclist, one of the troopers told Devan that he saved the man's life.

"I am in shock and I am so sad for this man. I am also in awe of my son, in complete awe of a nineteen year old kid who just saved a life," Keim wrote.

Despite being afraid herself and fearing for her son just feet away from the other traffic, Keim says it’s her son’s military training that saved the victim’s life.

"I was astonished of how he (Devan) remained so calm and knew exactly what to do," said Keim. "He was an outstanding man before the accident and I was super proud but he's even more of a man now and very capable and trained very well.”

Police have not released the victim’s name, but Keim did speak with his family who says he’s recovering from surgery.