Darrell Jennings home was miraculously still standing, and it quickly became a shelter for those who were suddenly left with nothing

In the early hours of Tuesday morning, Darrell Jennings walked out his front door and heard screaming.

A tornado had just torn through his quiet Tennessee neighborhood, and the house next door, along with numerous others, had been leveled to its foundations.

Except for a few broken windows, however, the Jennings' house was still standing. It quickly became a shelter for those who were suddenly left with nothing. The next-door neighbors, who had miraculously survived, straggled over. Others joined them.

"It's like we were a beacon," Amy Jennings said an interview Wednesday. "We had a house full of muddy people in their pajamas. A lot of little babies were screaming. Our teenage kids were amazing. They went into action. They held those kids and got them calm."

The monstrous tornado tore a 2-mile-long (3.2-kilometer-long) path through the county early Tuesday, killing 18 people, including five children under 13. Another 88 were injured, some of them critically. Crews were still sifting through debris on Wednesday and county officials warned that the death toll could still rise.

About 80 miles (130 kilometers) to the west, a tornado reaching EF-3 stage at some points with winds up to 165 mph (266 kmh) had barreled along a 50-mile (80 kilometer) path that began in Nashville, where it killed two people and wrecked homes and businesses. It continued into nearby Wilson County, which saw three deaths, and into Smith County. Benton County, to the west of Nashville, had one storm-related fatality. 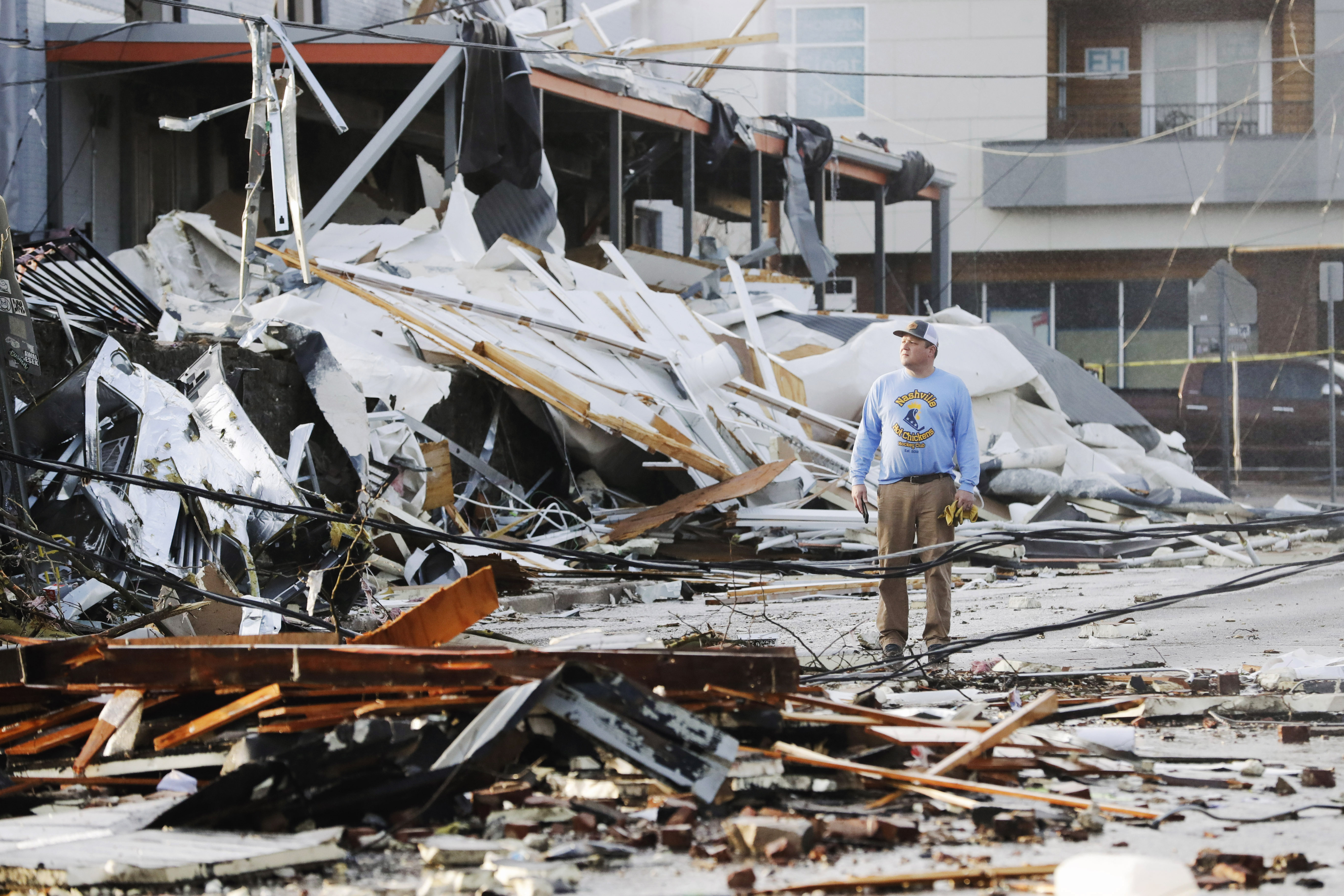 But no place saw more destruction than pockets of Putnam County, where the Jennings' home, and the few other houses left standing, became impromptu support centers for neighbors left homeless.

Darrell Jennings, a trained EMT and firefighter, had awakened his wife, Amy, and their three kids and hurried them into a hallway just before the tornado struck. It was over in seconds.

When he ventured outside, Jennings expected to see a few downed trees and some scattered debris. What he found was total devastation.

"There were no houses left," he said.

Sitting on their couch Wednesday afternoon, with massive destruction just outside the door, Darrell and Amy Jennings teared up as they recalled the previous night's scene. Three of the children who sheltered in their home had head injuries, Darrell Jennings said. Without power or cellphone service, he used his radio to call for help.

"I told them, 'Everything is destroyed around us. Send us everything you’ve got.' I've probably had about 30 firefighters tell me that's how they woke up."

Because their road was impassible, first responders set up a base at a church just up the road. Those who could walk made their way from the Jennings' house through the darkness, stumbling over the remains of their homes and belongings in pouring rain and sleet.

"We gave away all our shoes, because everyone was barefoot," Amy Jennings said. "One little girl said, 'I don’t want to leave the house that stayed up.'"

Some carried the children in their arms. Another neighbor drove his truck through yards and over fences to carry an older neighbor to the church. With the nearest neighbors safe, Darrell Jennings began searching the rubble for survivors.

Photos: Tornadoes Leave Behind Trails of Devastation in Nashville

He said he pulled several people out. One of those he tried to help was a small girl who didn't survive. "All the lives lost, it's unbelievable, unfathomable. It was hard to sleep last night, thinking of them and their loss."

In his 32 years as a volunteer EMT and firefighter, Jennings said he had been to about 10 different tornado sites, and "this is about the worst I've ever seen."

Wednesday afternoon was warm and sunny. The neighborhood was filled with the sound of chainsaws as hundreds of volunteers worked to clear fallen trees and sort debris into piles. A neighbor's outbuilding lay on its side in the Jennings' driveway, someone's cat was holed up in their bathroom, and cases of bottled water and snacks for neighbors and volunteers kept pouring in, filling their porch.

The Jennings' children, two high school seniors and an eighth grader, sprang into action, Amy Jennings said. "They're learning that they have the power to do good and help others, even in the midst of our crisis."

Jennings said she has been helping to recover personal items from what remains of her neighbors' homes. Several have already said they aren't going to rebuild because the memories of the tornado are too terrible. Among what she found: stuffed animals that remained miraculously dry under a mattress and a statue of a husband and wife that looked totally unscathed.

"The little things I salvage from their past can help them build their future," she said.