The following is some of what we know so far about the lives and the loved ones of the 10 victims killed in the Colorado supermarket shooting. This article will be updated as more information is released:

He “represents all things Love,” his daughter Erika Mahoney said in a poignant tweet that featured a wedding photo and drew wide attention on social media.

“I’m so thankful he could walk me down the aisle last summer,” added Mahoney, who is the news director at a California public radio station.

She told NPR in an interview that aired Wednesday that the pandemic had almost forced her to reschedule the wedding, which she and her husband decided to hold in a small backyard ceremony with their families.

Erika Mahoney said her father had tried to hold back his tears “in big life moments for me, like when he took me to the airport for college, but really, it’s just his softness shining through,” she said. “I admire my dad so much, and that’s why I picked that photo, because I’m looking up at him.”

She also tweeted that she's pregnant and knows her father “wants me to be strong for his granddaughter.”

Erika Mahoney said her father was shopping at Kings Sooper when he was killed. As news of his death became public, she said, friends texted her that he was like a father to them as well.

“One death trickles to so many people and to an entire community and beyond,” she said. “In this case, 10 lives were lost, and I think about my daughter and that my dad will never be able to hold her, but I know on some level, he will be there and he was so excited — and I’m going to tell her that he loves her so much.”

Teri Leiker, 51, worked at King Soopers. Allan Wooley said he used to work with her at the store where the shooting occurred, NBC affiliate 9NEWS Denver reports.

"Still in shock," Wooley said. "Everybody loved her here at the store."

Wooley also said that he participated in Special Olympics with Leiker, who competed in track and field and in skiing.

"She was funny. Always going to remember her smile and her laugh. She used to laugh a lot," Wooley said. "That’s what I’m going to miss about her. Her smile made everybody feel good inside every day when she was working.”

“She was there even before we started gathering, which is half an hour before the stampede started,” Dockendorf said. “She was just a staple. She was kind of a personal cheerleader for the band.” 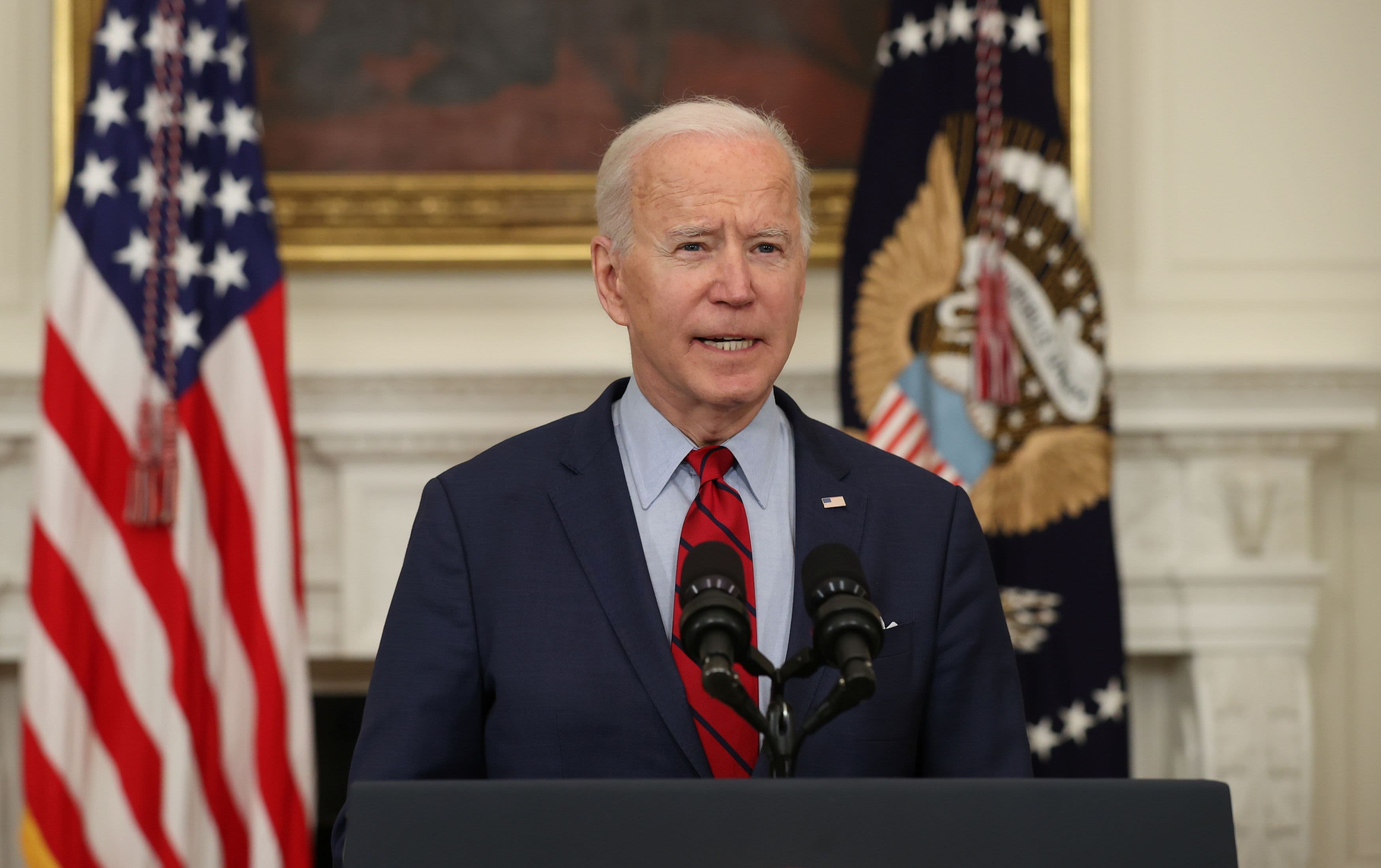 Rikki Olds' grandmother choked up on the phone as she described the young woman she played a large role in raising. Olds, 25, worked at the store.

“She was just a very kind and loving, bubbly person who lit up the room when she walked in,” said Jeanette Olds, 71, of Lafayette, Colorado.

“She hadn’t got to live life, 25 is young,” Bob Olds said. “She didn’t get to experience motherhood, marriage, any of those things. I mean it was taken from her, and I keep going back to ‘why?’”

The day after a gunman killed 10 people at a Boulder, Colo., grocery store, gun law experts testified in front of the Senate about the pros and cons of instituting stricter gun laws including extreme risk protection orders, also known as “red flag laws.”

Suzanne Fountain, 59, was a financial counselor in the health care industry, according to The Denver Post. Friends and colleagues remembered her as “incredibly warm” and “absolutely lovely,” they told the outlet.

“She was simply a very genuine person with tons of integrity,” said Hilarie Kavanagh, owner of Medicare Licensed Agents in Boulder where Fountain worked since 2018. “She was always bright and incredibly warm. You could just see it in her eyes.”

In her spare time, Fountain liked to volunteer at the local musical and theatrical nonprofit, eTown Hall.

Eric Talley, 51, joined the police force in Boulder in 2010 with a background that included a master’s degree in computer communications, his father said.

“At age 40, he decided he wanted to serve his community,” Homer “Shay" Talley, 74, told The Associated Press from his ranch in central Texas. “He left his desk job. He just wanted to serve, and that’s what he did. He just enjoyed the police family.”

Officer Talley was the first to arrive after a call about shots being fired and someone carrying a rifle, Boulder Police Chief Maris Herold said.

Boulder County District Attorney Michael Dougherty said Talley was “by all accounts, one of the outstanding officers" in the department.

With seven children, ages 7 to 20, Talley was a devoted father who “knew the Lord,” his father said.

“When everyone else in the parking lot was running away, he ran toward it,” Shay Talley said.

“We know where he is,” he added. “He loved his family more the anything. He wasn’t afraid of dying. He was afraid of putting them through it.”

Ten people are dead and a suspected gunman is in custody following a Monday afternoon shooting inside a Boulder, Colorado, supermarket. Eric Talley, the first Boulder police officer to respond to reports of the shooting, was among those killed.

Denny Stong, who at age 20 is the youngest victim of the shooting, worked for the King Soopers supermarket chain, according to his Facebook page. He listed planes, bikes and motorcycles as some of his interests, NBC News reports.

In an apparent nod to the coronavirus pandemic, Stong updated his Facebook profile picture to say, "I can't stay home, I am a Grocery Store Worker."

Schaefer said Waters did design work for his business, Embrazio, and was always optimistic. “She was a beautiful person,” Schaefer said..

"She was a beautiful soul. She was a warm person with a light in her eye," he said.

Waters was a longtime resident of the city, but was originally from Illinois, the Denver Post reported.

Colorado state Rep. Judy Amabile knew Waters. "I know her from a store on the Pearl Street Mall where I shop — and she's gone now," Amabile said on the state House floor Tuesday as she read the names of all the dead.

Lynn Murray, 62, was shopping at King Soopers, where a friend’s daughter had seen her. Word made it to her husband, John Mackenzie, who drove to the store and started texting his wife.

After getting no answer in about five minutes, “I just fell over in my chair,” he said, choking up.

Murray had a long career taking photos for magazines including Cosmopolitan and Vogue, Mackenzie said.

"She charmed the pants off me” when they met at a photography studio in New York City years ago, he said. Computer backgammon games soon evolved into a relationship and eventually, two children.

"She’s the kindest person I ever knew, hands down. She had an aura about her that was the coolest freakin’ thing you’d ever want to know. She was just a cool chick,” Mackenzie said. “She had it all together — she really did."

He said he spent hours consoling their children before he "lost it" Tuesday morning. Mackenzie offered a message:

Neven Stanisic, 23, had come to the United States after his family fled Bosnia 20 years ago, The Denver Post reported. They attended a Serbian Orthodox Church in a suburb of Boulder. Stanisic had two jobs, one for a maintenance company that repaired machines for Starbucks and other stores, The Colorado Sun reported. He had been at a Starbucks inside the King Soopers grocery store to fix a coffee machine, and was killed sitting in his vehicle in the parking lot, one of the priests said.

Tralona Bartkowiak, 49, managed a yoga and festival clothing store in Boulder called Umba that her sister started, her brother told The New York Times. Originally from California, she had rented a house outside of Boulder and was recently engaged. She had gone to the King Soopers to get a prescription.