"Jelani is loved and represents the absolute best of our beloved fraternity; therefore, bringing those responsible for this heinous act to justice is not a request but a demand," the petition reads

Thousands have signed a petition started by an Alabama fraternity seeking justice for Illinois State University grad student Jelani Day, who was found dead following his "suspicious" disappearance this summer.

With more than 26,000 signatures as of Thursday, the petition, started by members of Omega Psi Phi Fraternity Inc. and the Nu Epsilon chapter at Alabama A&M University, calls for federal and state authorities to take over the investigation, alleging the Bloomington Police Department "has shown the inability to handle a case of this nature."

The petition follows similar criticisms from Day's family, who alleged his case did not receive the attention of other missing persons like that of Gabby Petito, whose disappearance and subsequent death made national headlines and spawned a multi-state search from numerous law enforcement departments.

Day's mother also recently cited undisclosed discrepancies between an autopsy done by the LaSalle County Coroner's office and an independent autopsy ordered by the family.

Still, she also sought to recently dispel rumors and misconceptions about the case.

"Family, We need to hit pause for a moment," a post on a Facebook page seeking justice for Day read Monday. "As outraged and upset as we are, we must stay the course, and stick to the facts in our search for answers."

Reports had surfaced in recent days indicating Day's body was missing several organs when an independent autopsy was ordered by the family.

LaSalle County Coroner Richard Ploch told NBC 5 in a statement "some were severely decomposed due to the body being in the water," but he noted that no organs were missing.

"No organs were missing. I do not want to stray off from the facts," Day's mother, Carmen Bolden Day, said in statement. "There were contradicting facts from the first preliminary autopsy compared to the second independent autopsy, but this is not a case of organ harvesting, however, my son did not put himself in a river."

She did not comment further on the "contradicting facts" she cited between the autopsies, but continued her cry for answers.

"My son was murdered and my goal and purpose are to find out what happened and hold those responsible accountable!!!” she wrote.

Day, an Illinois State University grad student, disappeared on Aug. 24 and was reported missing soon after by his family and a professor. His car was found two days later in a wooded area near where his body was ultimately discovered in the Illinois River under what police have said were "unusual circumstances."

Little information has been released since Day's body was identified weeks after it was found in September in the Illinois River near Peru, a far southwest Chicago suburb. The location was miles from where Day was last seen, but not far from where his car had been discovered days earlier.

The cause and manner of death have not yet been released, and Ploch said such details are "still going to take some time" as they await toxicology and histology reports.

"Then need the police agencies to help with the big piece on how he came to be in the water," Ploch said.

"To me it's unusual, the way his vehicle was, you know, it was off of a parking lot inside, it wasn't like deep into a woods, but it was off a parking lot," Fermon said. "That's unusual just in itself. There's not much I can release at this point. So just really to state the obvious - that's unusual."

Police investigating the disappearance of an Illinois State University graduate student are asking the public for tips as the search for the young man continues nearly a month after he vanished.

Day's family and a professor reported him missing on Aug. 25 after he did not show up for class for several days.

The morning prior, Day was captured on surveillance video going into a dispensary in Bloomington. Two days later, police found his car in the woods 60 miles away in Peru, Illinois. Police said the clothes he was last seen wearing in the surveillance video were found in his white Chrysler 300.

Day's mother said it was not like him to disappear without telling someone about his whereabouts.

Bolden said she doesn’t think her son ran away and believes someone may have hurt her son.

"He wasn’t depressed. He didn’t have any kind of pressures that would make him want to escape from life," she said. "So I do feel as if there was someone involved."

Several departments, including the FBI, are assisting in the investigation, authorities have confirmed.

Day graduated from Alabama A&M University with a degree in speech language pathology. Bolden said her son was inspired to go down this career path after seeing a friend struggle. 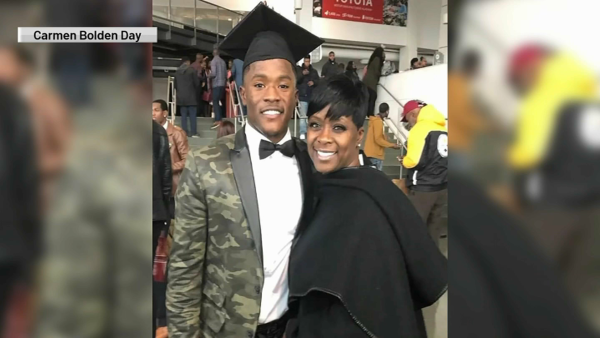