Finding new cars is proving increasingly difficult with U.S. dealers having just under a million new vehicles on their lots in August -- 72% lower than the 3.58 million in August of 2019

The global shortage of computer chips is getting worse, forcing automakers to temporarily close factories including those that build popular pickup trucks.

General Motors announced Thursday that it would pause production at eight of its 15 North American assembly plants during the next two weeks, including two that make the company's top-selling Chevrolet Silverado pickup.

Ford will stop making pickups at its Kansas City Assembly Plant for the next two weeks. Shifts will be cut at two more truck plants in Dearborn, Michigan, and Louisville, Kentucky.

The cuts will compound an already short supply of cars, trucks and SUVs on dealer lots nationwide that have pushed prices to record levels. Automakers reported that U.S. dealers had just under a million new vehicles on their lots in August, 72% lower than the 3.58 million in August of 2019.

“It now appears to be accelerating in the wrong direction,” said Jeff Schuster, president of global vehicle forecasting for LMC Automotive, a consulting firm.

Industry analysts say the delta variant of the novel coronavirus has hit employees at chip factories in southeast Asia hard, forcing some plants to close. That's worsened a chip shortage that was starting to improve earlier in the summer.

“Now the prospects for new sales for the rest of the year continue to dim with the reality that tight inventory will last well into 2022,” said Kevin Roberts, director of industry insights for Cargurus.com. 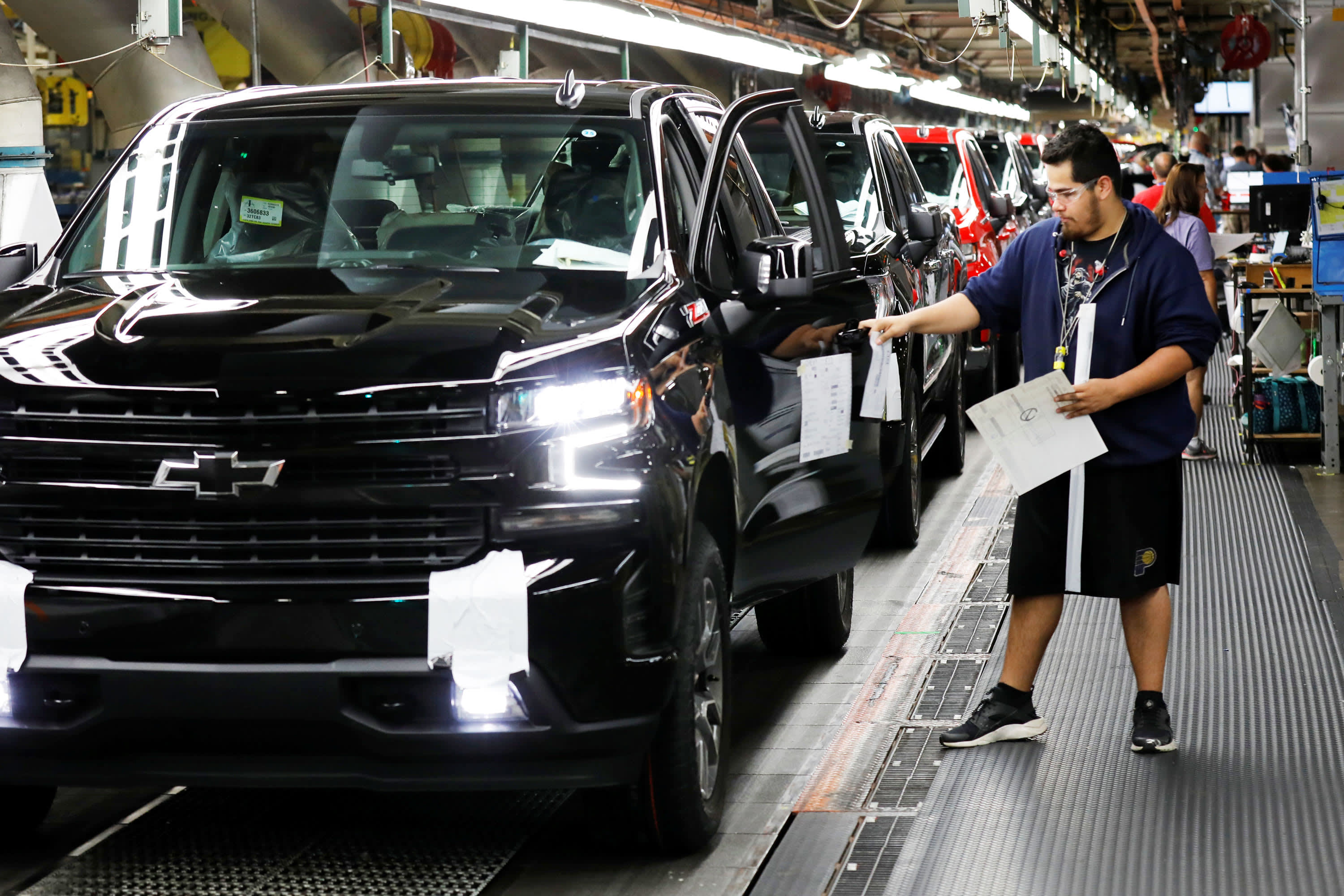 Demand for trucks, SUVs and other autos is strong, but buyers are growing frustrated due to lack of inventory and high prices. U.S. light vehicle sales fell nearly 18% in August compared with a year ago, while the average vehicle sale price hit over $41,000, a record, according to J.D. Power.

Sales of Ford's F-Series trucks fell nearly 23% for the month.

The August sales dip and inventory shortages prompted Schuster to cut his U.S. sales forecast for the year to 15.7 million. Until the pandemic hit, sales had been running around 17 million per year.

Consumers who need a new vehicle don't have many choices with dealer supplies so short, Schuster said. Some have left the market because they can't find anything that meets their needs. For others, “pricing is through the roof, so they can't afford it and aren't willing to spend what it's going to cost to get that vehicle.”

GM is shutting down pickup truck plants in Fort Wayne, Indiana, and Silao, Mexico, for a week starting Monday. A plant in Wentzville, Missouri, that builds midsize pickups and big vans will close for two weeks. Other plants that make small and midsize SUVs will be idled for two weeks or longer.

“These recent scheduling adjustments are being driven by the continued parts shortages caused by semiconductor supply constraints from international markets experiencing COVID-19-related restrictions,” GM said in a statement.

From wood to computer chips, consumers are facing shipping delays and price spikes because of shortages and other supply chain issues. NBCLX Storyteller Eric Rodriguez explains why the world's supply chains were unable to weather the pandemic.

Stellantis shut down its Ram truck assembly plant in Sterling Heights, Michigan, this week due to the chip shortage. The company’s Belvidere, Illinois, small-SUV plant and a minivan plant in Windsor, Ontario, are down for two weeks.

Toyota said it would slash production by at least 40% in Japan and North America for the next two months, cutting production by 360,000 vehicles worldwide in September alone.

Nissan, which announced in mid-August that chip shortages would force it to close its huge factory in Smyrna, Tennessee, for two weeks until Aug. 30, now says the closure will last four weeks, until Sept. 13.

There is a little good news. Ford said its overall production rose to nearly 80% from July to August, although it’s not clear how long that would last.