Lethal US Raid on IS in Syria Encounters a Doll, Crib, Bomb, Bullets

It was an audacious raid in an extremist stronghold of northwest Syria, months in the works and executed with the understanding that children might die

When helicopters carrying some 50 U.S. commandos thumped onto the ground in Syria an hour after midnight, the raiders confronted a houseful of extremists and children.

Baby comforts were inside — a stuffed bunny, a blue plastic swing, a crib. So was the paraphernalia of violence — such as the bomb Abu Ibrahim al-Hashimi al-Qurayshi is said by U.S. officials to have used to blow up himself, his family and perhaps others in his immediate proximity.

It was an audacious raid in an extremist stronghold of northwest Syria, months in the works and executed with the understanding that children might die as well as the hunted IS chief if the building's occupants did not get out when given the chance to leave.

President Joe Biden, who ordered the raid, said the world is rid of a man he described as the driving force behind the “genocide of the Yazidi people in northwestern Iraq in 2014," when slaughters wiped out villages, thousands of women and young girls were sold into slavery and rape was used as a weapon of war.

“Thanks to the bravery of our troops, this horrible terrorist leader is no more,” Biden said.

Over months of planning, U.S. intelligence first had to locate al-Qurayshi's whereabouts and understand his movements — or lack thereof. They concluded he rarely, if ever, left his family's third-floor quarters except to bathe on the building’s roof.

Anticipating that al-Qurayshi could well choose death by self-detonation if cornered by U.S. forces, U.S. officials commissioned an engineering study-from-afar of the three-story, cinder-block building to see if it would collapse in that event and kill everyone inside.

They concluded that enough of the building was likely to survive such a blast to spare those not near him.

They constructed a tabletop model of the house and in December set it up in the Situation Room, the ultra-secure White House command and communications post where presidents and their national security aides manage crises.

The second floor of the Syrian house, also white, was occupied by a lower-ranking Islamic State leader and his family. The ground floor, partly a basement, housed a family unconnected to the Islamic State and unaware of al-Qurayshi’s presence or significance, U.S. officials said.

Biden was first briefed in depth more than a month ago by operational commanders after U.S. forces were satisfied they would find al-Qurayshi — also known as Haji Abdullah — where they did.

The Islamic State, which once controlled most of the territory in Iraq and parts of Syria, has been attempting to regenerate, and staged its most ambitious operation in years when it seized a prison in northeast Syria last month holding at least 3,000 IS detainees.

For all his brinkmanship with Russia as it amasses its forces for a possible new invasion of Ukraine, Biden could not afford to take his eyes off IS.

On Tuesday morning, he met Defense Secretary Lloyd Austin and Gen. Mark Milley, chairman of the Joint Chiefs of Staff, in the Oval Office and gave the go-ahead. Wednesday evening in Washington, Biden was in the Situation Room, monitoring a live feed of the mission as it unfolded.

At his refugee camp near the raid, Jamil el-Deddo heard aircraft and an explosion ripping through the night and thought at first it might be the notorious barrel bombs “that used to be dropped on us.” President Bashar Assad’s forces used the explosives-packed barrels against opponents during the Syrian conflict, inflicting indiscriminate death and injury.

“The first moments were terrifying," el-Deddo told AP. “No one knew what was happening.”

The U.S. launched the raid from an unidentified base in the region after having “deconflicted” the mission with “a range of entities." That's jargon for giving certain other military forces or interests in the region — perhaps Russia — notice of a U.S. operation underway.

At the outset, the building's occupants were told to get out.

“If you don’t leave, we have orders," a man speaking with Iraqi dialect could be heard saying through a loudspeaker. “We will fire missiles toward the house. There are drones overhead.” Who Is the ISIS Leader Killed in the U.S. Raid? Here's What to Know 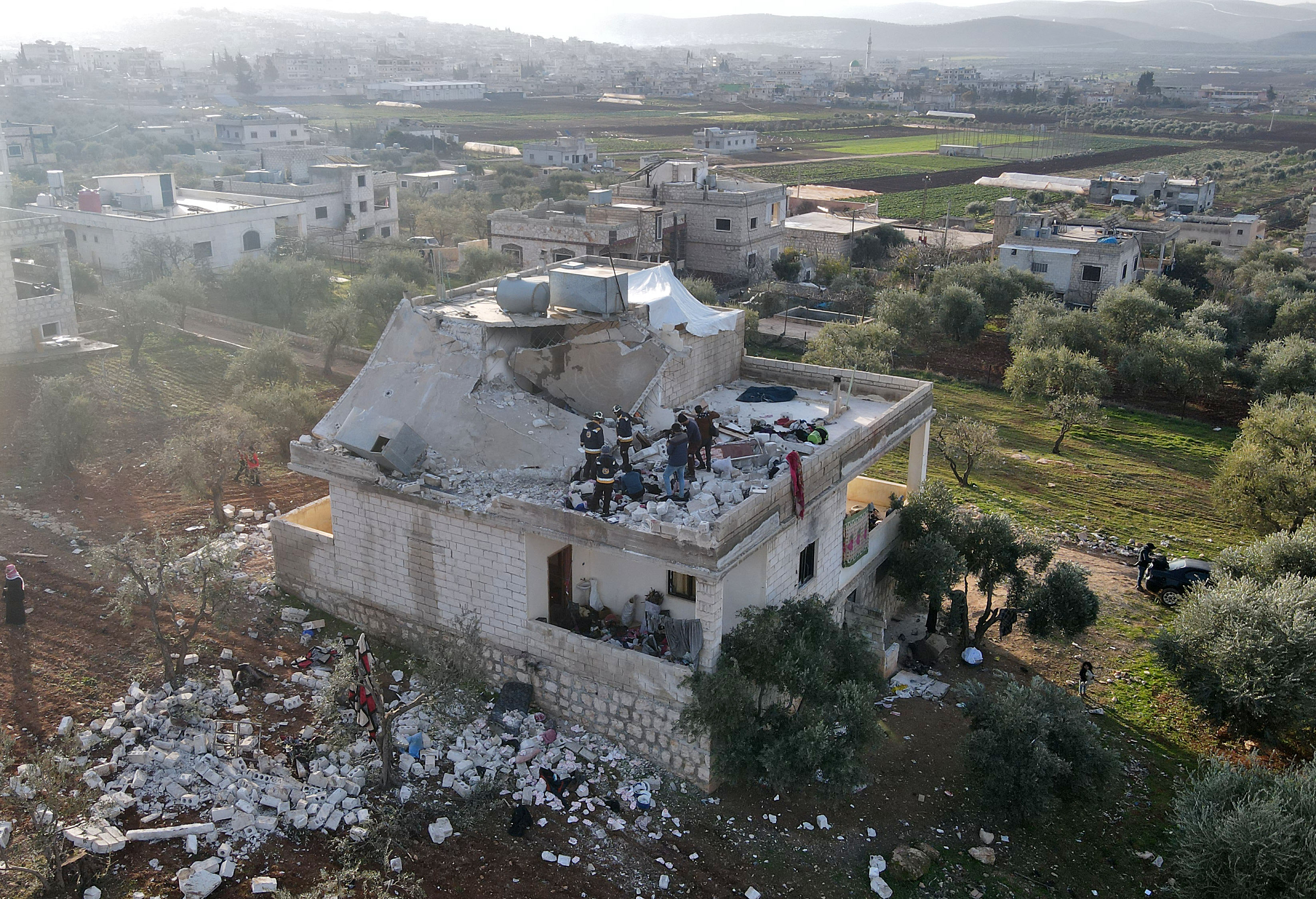 Biden: ISIS Leader Dies in Suicide Blast During US Raid in Syria

Ten people left the building, said Pentagon spokesman John Kirby — a man and woman from the first floor and eight children in all from the first and second.

Not long after came the explosion that collapsed much of the third story and blew bodies out of the house, al-Qurayshi's among them. Gen. Frank McKenzie, head of U.S. Central Command, said the blast was more massive than one that would be expected from a suicide vest.

From the second floor, the barricaded IS lieutenant, whom officials did not identify, and a woman thought to be his wife exchanged sustained gunfire with the commandos, U.S. officials said. Both died in the firefight, U.S. officials said, and one child with them was also found dead, McKenzie said.

The special operations forces conducting the mission faced danger from outside the building as well.

While the commandos were clearing the second floor, a number of foreign fighters linked to al-Qaida in Syria “began maneuvering with weapons toward U.S. forces” at the scene, McKenzie said. Gunfire from a U.S. helicopter killed at least two of them, he said.

Another helicopter developed a significant malfunction, McKenzie said. After landing it safely, away from the scene, the Americans rigged it to explode, then struck it with munitions from the air to be doubly sure "no sensitive equipment would remain in Syria.”

Videos released by the Syrian opposition group Syrian Civil Defense, also known as White Helmets, showed a paramedic rushing a little girl from the house into an ambulance. A photo later circulated on social media showing a girl who appeared to be about 5 with blood on her face.

When the commandos safely departed, Biden uttered “God bless our troops,” according to a U.S. official who briefed the press on condition of anonymity. Biden was kept abreast of their long flight out of Syria overnight by Jake Sullivan, the national security adviser.

In images afterward, blood could be seen on the walls and floor in what remains of the structure. A wrecked bedroom had a wooden crib and the stuffed rabbit doll. On one damaged wall, the baby swing was still hanging.

In the fog-of-war aftermath, there was no immediate accounting from the U.S. of how many children died in all, and how. The White House attributed the deaths of three of the children to al-Qurayshi’s blast while the Pentagon spoke of two, both leaving unexplained, for now, how many might have been killed in the firefight.

Biden said U.S. forces chose a riskier commando raid instead of an attack from the air so as to minimize civilian casualties.

Yet the U.S. launched the operation knowing the IS leader might respond by killing innocent people around him as well as himself. McKenzie said the U.S. “as always” will look into whether innocent people were killed by its forces.