The chief prosecutor of the coastal state of Quintana Roo said that two main gangs are fighting for control of Puerto Morelos, just south of Cancun

The shooting of two suspected drug dealers at a resort on Mexico’s Caribbean coast is part of a fight among about a dozen gangs to carve up the lucrative market of selling drugs to tourists and locals, an official said Friday.

The chief prosecutor of the coastal state of Quintana Roo said that two main gangs are fighting for control of Puerto Morelos, just south of Cancun. Thursday’s shooting occurred on a beach just yards from luxury hotels.

But about 10 gangs are fighting over street-level drug sales in Tulum, a beach town further south. A California woman and a German tourist were killed in the crossfire of a gang shootout two weeks ago, and three other tourists were wounded.

“In Tulum we have about 10 groups of drug dealers and here in Puerto Morelos there are two groups fighting each other,” prosecutor Oscar Montes de Oca, told the Imagen Radio station. 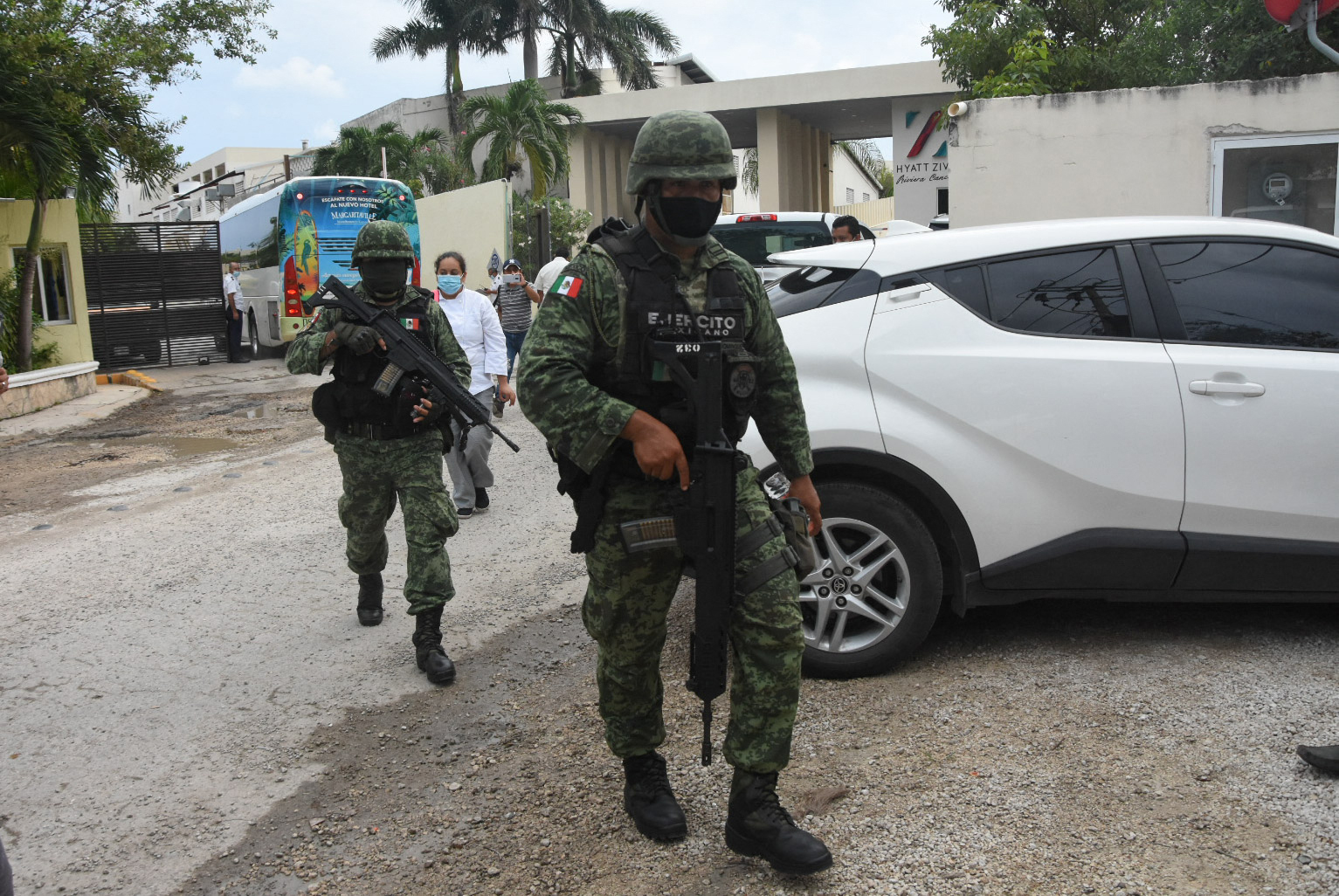 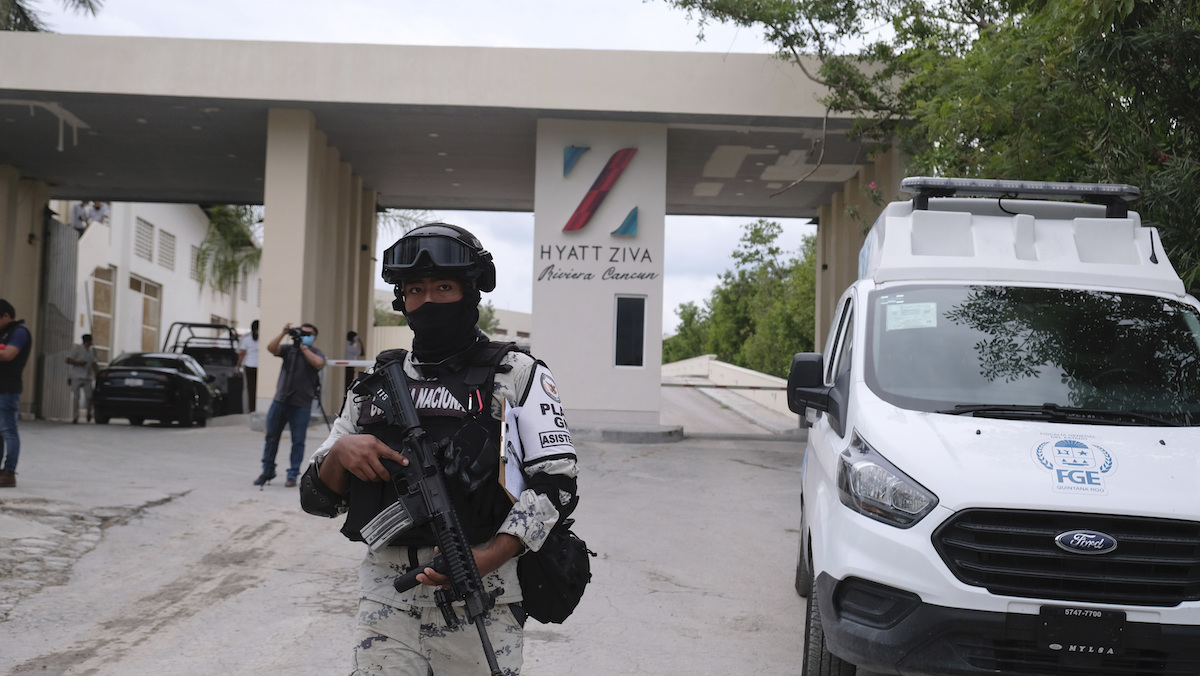 Montes de Oca said the commando of about 15 masked drug gang gunmen arrived in vehicles and stormed the beach in Puerto Morelos by entering through a hotel parking lot — not coming by boat, as Gov. Carlos Joaquin had said the evening before.

Montes de Oca said Friday that they fled in a boat they commandeered after the attack.

The dramatic shooting attack sent tourists scrambling for cover at the beach in front of the Azul Beach Resort and the Hyatt Ziva Riviera Cancun.

Montes de Oca said the presence of over 20 million tourists every year in the coastal state provided a strong draw for retail drug sales. “We are facing an issue of supply and demand for drugs,” he said.

Cartels fighting for the area’s lucrative retail drug trade include the Jalisco cartel and the a gang allied with the Gulf cartel.

Montes de Oca said one of the men targeted in the attack fled into one of the hotels before dying. The other was killed on the beach. One person suffered non-life-threatening injuries in the attack, but authorities could not immediately determine whether that person was a hotel employee or a guest.

Joaquin called the attack “a serious blow to the development and security of the state ... putting the image of the state at grave risk.”

Antonio Chaves, the leader of Maya Riviera Hotel Association, told The Associated Press the shootings would impact the state's tourism industry, which is recovering the coronavirus pandemic.

“Clearly, we are going to suffer setbacks in the very short term,” Chaves said, adding that, even though it causes suffering, it's unlikely to deter drug gangs.

“They are criminal groups that don't care about the place, the time, the surroundings, and that affects the tourism zone," he said.

The shootings were the latest chapter in drug gang violence that has sullied the reputation of Mexico’s Caribbean coast as a once-tranquil oasis.

Guests at both resorts posted social media images of tourists hiding or nervously milling in the lobbies.

“The two women that were killed in Tulum, you know, in the crossfire, you know, this is what happened,” Jackson said. “So we all kind of worried that something will happen while we’re there and we’ll get caught in the in the action.”

Just before they left, Jackson and Marie Hitches, also of London, said they saw about five masked men walking down the beach a couple of hours before the shooting, asking questions even of a lifeguard and security staff, apparently looking for the rival drug dealers, who had masqueraded as trinket vendors.

“And he (the lifeguard) radioed in, and that’s when the security came out at that point,” Jackson added, saying that while the security people spoke to the suspected cartel members, "nothing happened. It was about two hours later when the shooting happened.”

Rival cartels often kill other gangs' street-level dealers in Mexico to eliminate competition and ensure their drugs are sold first. It is not the first time that tourists have been caught in such battles.

The Puerto Morelos shooting comes two weeks after California travel blogger Anjali Ryot of San Jose, California, and German citizen Jennifer Henzold were killed by crossfire during what prosecutors said appeared to be a clash over street-level drug sales in Tulum.

Three other foreign tourists were wounded in the Oct. 20 shooting at a street-side eatery right off Tulum’s main strip. They included two German men and a Dutch woman.

Montes de Oca said eight suspects in the Tulum attack had been detained in possession of firearms.

The German Foreign Office issued a travel advisory about the violence, advising its citizens, “If you are currently in the Tulum or Playa del Carmen area, do not leave your secured hotel facilities.”

There have been signs that the situation in Quintana Roo state, where all the resorts are located, was out of control months ago. In June, two men were shot to death on the beach in Tulum and a third was wounded.

And in nearby Playa del Carmen, police staged a massive raid in October on the town’s restaurant-lined Quinta Avenida, detaining 26 suspects — most apparently for drug sales — after a city policewoman was shot to death and locked in the trunk of a car. Prosecutors said Friday they have arrested a suspect in that killing.

The administration of President Andrés Manuel López Obrador has pinned tourism hopes on the so-called Maya Riviera, where it has announced plans to build an international airport and a stop for the Maya train, which will run in a loop around the Yucatan Peninsula.