The arrests of Muna and Muhammad al-Kurd, 23, came a day after police detained a well-known Al Jazeera reporter covering a demonstration in the neighborhood

Israeli police on Sunday detained two members of a prominent family in the contested Sheikh Jarrah neighborhood of Jerusalem who led protests against attempts by Jewish settlers to evict dozens of Palestinian families from their homes in the area. The twin brother and sister were released later in the day.

The arrests of Muna and Muhammad al-Kurd, 23, came a day after police detained a well-known Al Jazeera reporter covering a demonstration in the neighborhood. The reporter, Givara Budeiri, was held for four hours before she was released and sent to a hospital to treat a broken hand. It was not clear how her hand was broken, but her boss blamed police mistreatment.

Earlier this year, heavy-handed police actions in Sheikh Jarrah and other parts of east Jerusalem fueled weeks of unrest that helped spark an 11-day war between Israel and Hamas militants in the Gaza Strip.

Those tensions are simmering again — and could flare anew if Israeli ultranationalists follow through on plans to march Thursday through the Muslim Quarter of Jerusalem's Old City. Israeli police were expected to hold consultations on whether the parade, which was originally set to take place when the war erupted on May 10, would be allowed to proceed.

Renewed violence could complicate the task of embattled Prime Minister Benjamin Netanyahu's political opponents, who formed a fragile and disparate coalition last week, of passing a parliamentary vote of confidence required to replace him and take office. A close ally of Netanyahu oversees the police.

In Sheikh Jarrah, Jewish settlers have been waging a decades-long campaign to evict the families from densely populated Palestinian neighborhoods just outside the walls of the Old City. The area is one of the most sensitive parts of east Jerusalem, which is home to sites sacred to Jews, Christians and Muslims and which Israel captured in 1967 and annexed in a move not recognized internationally. Israel views the entire city as its capital, while the Palestinians want east Jerusalem as the capital of their future state.

Settler groups and Israeli officials say the Sheikh Jarrah dispute is merely about real estate. But Palestinians say they are victims of a discriminatory system. The settlers are using a 1970 law that allows Jews to reclaim formerly Jewish properties lost during the 1948 war surrounding Israel’s creation, a right denied to Palestinians who lost property in the same conflict.

The al-Kurd family in Sheikh Jarrah has been at the forefront of months of protests against the planned evictions. 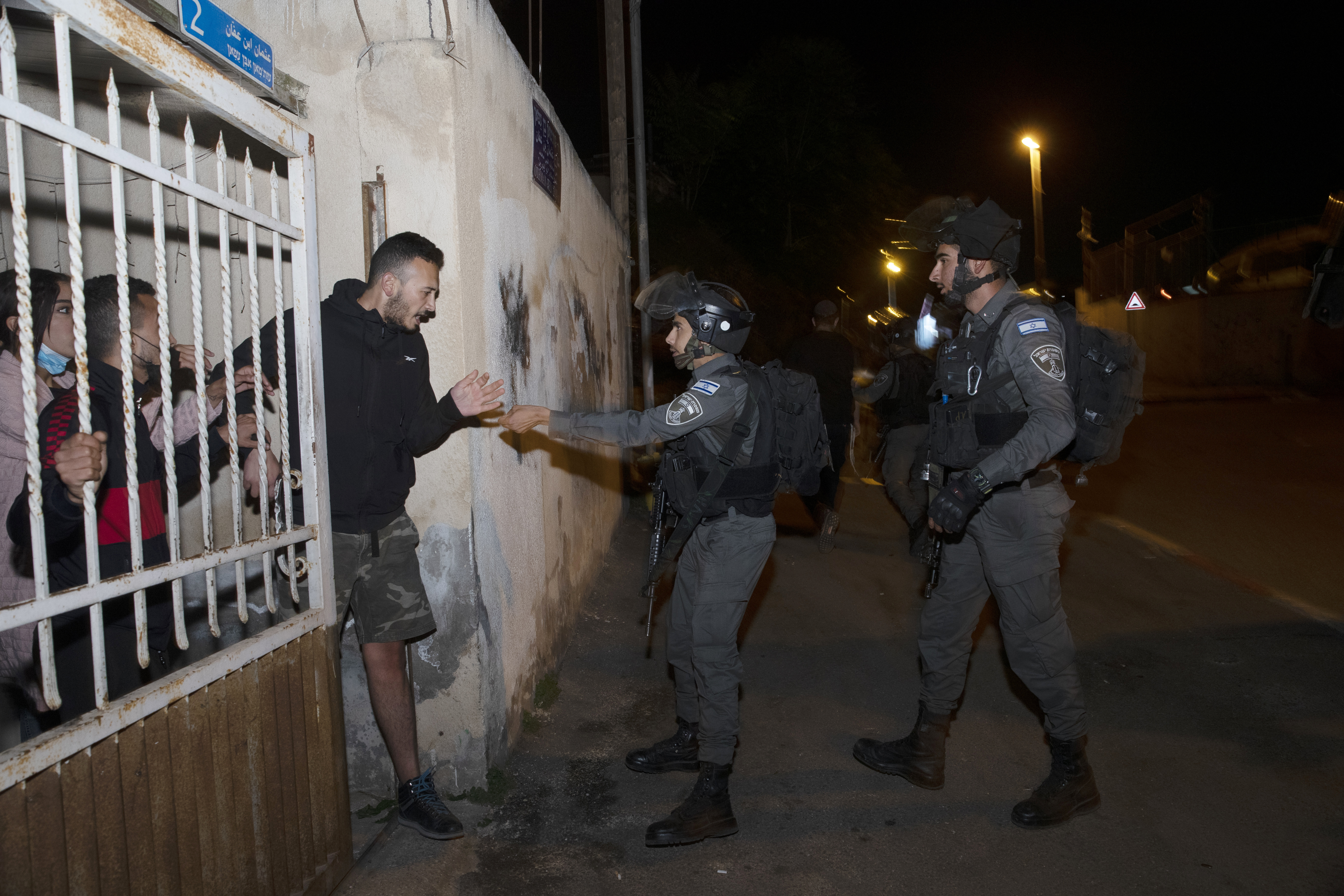 Her father, Nabil al-Kurd, said police “stormed the house in large numbers and in a barbaric manner.”

“I was sleeping, and I found them in my bedroom,” he said. Police then searched the house and arrested his daughter. Video posted on social media showed her being taken away in handcuffs.

Police also searched for her brother, Muhammad, but he was not there. Later, he turned himself in to Jerusalem police.

The siblings' lawyer, Nasser Odeh, told journalists outside the police station that his clients were accused of “disturbing public security and participation in nationalistic riots.”

On Sunday evening, Muna al-Kurd was released. But before she was freed, police briefly clashed with a crowd outside the station, throwing stun grenades. Later Sunday, Muna posted on Instagram that her brother had been released as well.

The arrests came a day after Al Jazeera's Budeiri, wearing a protective vest marked “press,” was dragged away by police at a protest in Sheikh Jarrah.

According to witnesses, police asked Budeiri for identification. Colleagues said police did not allow her to return to her car to retrieve her government-issued press card. Instead, they said she was surrounded by police, handcuffed and dragged into a vehicle with darkened windows.

In video footage posted online, Budeiri can be seen in handcuffs, while clutching her notebook and shouting, “Don’t touch, enough, enough.”

Fighting between Israel and the militant group Hamas has killed more than 100 people, with the death toll largely among Palestinians, over the past few days, with an exchange of airstrikes and rocket fire escalating to mob violence in the streets. Whether Americans know it or not, our country is already embroiled in this conflict, explains NBC News and MSNBC foreign correspondent Matt Bradley.

Israeli police said entrance to the neighborhood is limited due to the tense situation, and only accredited journalists are allowed in. They said that when Budeiri was unable to provide her press pass, police “removed her.” They added that Budeiri was arrested after becoming hostile and pushing an officer.

“The Israel Police will allow the freedom of press coverage, provided that these are done in accordance (with) the law while maintaining public order," according to a statement. The statement did not reference her broken hand.

Budeiri was held for four hours before she was released and sent to the hospital, said Walid Omary, the Jerusalem bureau chief for Al Jazeera. In addition to the broken hand, Omary said Budeiri also suffered bruises on her body. He said her cameraman’s video camera was also heavily damaged by police.

As part of her release, Budeiri is banned from returning to the neighborhood for 15 days, Omary said.

“They are attacking the journalists in east Jerusalem because they don’t want them to continue covering what’s happening inside Sheikh Jarrah," he said.

The Foreign Press Association, which represents hundreds of journalists working for international news organizations, said the treatment of Budeiri was “the latest in a long line of heavy-handed tactics by Israeli police” against the media in recent weeks. It said journalists have been hit by stun grenades, tear gas, sponge-tipped bullets and putrid-smelling water.

"We call on police to punish the officers who needlessly injured an experienced journalist and broke professional equipment. And once again, we urge police to uphold Israel’s pledges to respect freedom of the press and to allow journalists to do their jobs freely and without fear of injury and intimidation," the FPA said.

Last month's war was triggered by weeks of clashes in Jerusalem between Israeli police and Palestinian protesters in and around the Al-Aqsa Mosque compound, a flashpoint holy site.

The war erupted on May 10 when Hamas, calling itself the defender of the holy city, launched a barrage of rockets at Jerusalem. Some 254 people were killed in Gaza and 13 in Israel before a cease-fire took effect on May 21.

Israel has alleged that Hamas military intelligence was operating from the building. The AP has said it has no indication of a purported Hamas presence and has called for an independent investigation.