A Twitter employee, who testified to the committee anonymously, told investigators that Trump’s tweet coincided with an increase in violent rhetoric among his supporters online

Former President Trump’s December tweet urging his followers to go to Washington, D.C, on Jan. 6, 2021, for a “wild” and “big” protest led to increased attention on that particular day, the House committee investigating the Capitol riot said Tuesday.

Committee member Jamie Raskin, D-Md., showed an emailed request from the pro-Trump group Women for America First to the National Park Service to change the date of their planned event, originally scheduled for a few days after President-elect Joe Biden's inauguration, to Jan. 6.

"This rescheduling created the rally where Trump would eventually speak," Raskin said.

The committee also showed tweets and posts from Trump's followers between the Dec. 19 tweet and Jan. 6.

"One user asked, 'Is the 6th D-Day? Is that why Trump wants everyone there?'" Raskin said. "Another asserted, 'Trump just told us to all come armed.' A third took it even further: 'It will be wild means we need volunteers for the firing squad.'"

A Twitter employee, who testified to the committee anonymously, told investigators that Trump’s tweet coincided with an increase in violent rhetoric among his supporters online.

A former Twitter employee testified to the Jan. 6 committee that the social media giant made allowances for former President Donald Trump’s Twitter violations because they “relished in the knowledge that they were also the favorite and most used service of the former president.”

One Trump supporter promised there would be “a red wedding going down" Jan. 6, in a reference to the "Game of Thrones" show in which many of the attendees are murdered at a wedding.

According to the committee, the threats of violence were, in some cases, even more explicit.

"Some of the online rhetoric turned openly homicidal and white nationalist, such as, 'Why don’t we just kill them, every last Democrat, down to the last man, woman and child.' And, 'It’s time for the day of the rope. White revolution is the only solution,'" Raskin said. 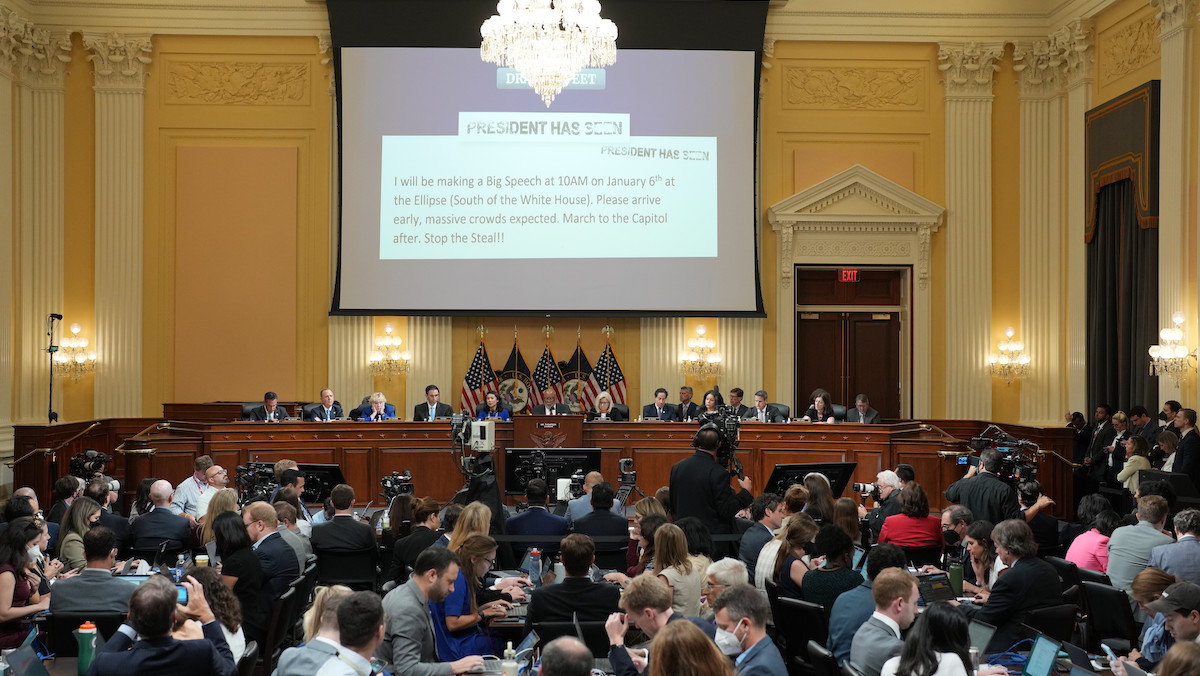 In the days following Trump's tweet, Raskin said, posts on pro-Trump site theDonald.win "featured discussions of the tunnels beneath the Capitol complex; suggestions for targeting members of Congress; and encouragement to attend a 'Once in a lifetime event.'"

One post read, "Bring handcuffs and wait near the tunnels." Another said to come with "body armor, knuckles, shields, bats, pepper spray, whatever it takes," the committee showed.

This is a live update. Click here for complete coverage of the Jan. 6 hearings.