‘Overwhelm the Problem': Inside Biden's War on COVID-19

For Biden, beating back the pandemic is a defining challenge of his presidency, testing his central promise to the American people that he can better manage the outbreak than his predecessor

The meetings begin each day not long after dawn. Dozens of aides report in, coffee in hand, joining by Zoom from agency headquarters, their homes or even adjacent offices.

The sessions start with the latest sobering statistics meant to focus the work and offer a reminder of what’s at stake: new coronavirus cases, people in hospitals, deaths. But they also include the latest signs of progress: COVID-19 tests administered, vaccine doses shipped, shots injected.

Where the last administration addressed the pandemic with the vernacular of a natural disaster — using the Federal Emergency Management Agency’s mantra of a “federally supported, state managed and locally executed” response — Biden’s team is borrowing from the Pentagon and the doctrine of overwhelming force.

“We’re at war with this virus,” COVID-19 coordinator Jeff Zients said in an interview with The Associated Press between Sunday morning meetings on the response. “We’re taking every resource and tool the federal government has to battle on every front.”

It's a strategy facing urgent tests after Biden inherited an inconsistent vaccine distribution plan and with the emerging threats from new virus variants.

The goal, Biden aides say, is as simple as it is ambitious: After a year of being on defense they want to take the fight to the virus — to “overwhelm the problem,” a kind of mantra for the team.

The campaign is being waged in schools and sterile pharmaceutical plants, on the vast blacktop of stadium parking lots and along the sidewalks outside Americans’ homes. To defeat the virus, Biden’s team must oversee a herculean logistical effort to put shots into hundreds of millions of arms, but also overcome vaccine hesitance, politically charged science skepticism and fatigue across all corners of society after nearly a year of hardship.

For Biden, beating back the pandemic is a defining challenge of his presidency, testing his central promise to the American people that he can better manage the outbreak than his predecessor. His team seemingly day by day rolls out an almost dizzying array of new efforts and appeals large and small — everything from building a surgical glove factory in the U.S. by year's end to asking Americans to wear masks while walking their dogs.

President Joe Biden is making passage of a new $1.9 trillion COVID-19 relief bill his top priority, with Democrats wanting to vote next week, with or without Republican support. Republicans say the plan costs too much, and want to break it into smaller bills.

The central question for Biden and his team, one that can’t be answered yet: Will it all add up to enough?

“They’re taking exactly the right approach,” said Dr. Leana Wen, an emergency physician and public health professor at George Washington University who previously served as Baltimore’s health commissioner. “The federal government is taking responsibility, instead of leaving everything to state and local governments and blaming others when things go wrong.”

For all of the activity, though, Biden knows that there are more grim statistics to come before Americans can return to any semblance of the “before days."

More Americans have died from COVID-19 in the last year than during all of World War II and some projections show the death toll could top that of the Civil War by the beginning of summer.

Since he took office three weeks ago, Biden’s team has attacked the problem on multiple fronts. They have unleashed billions of federal dollars to boost vaccinations and testing and developed a model to deploy more than 10,000 active-duty troops to join even more members of the National Guard to put shots into arms. Mass vaccination sites, supported by federal troops, are set to open in California, Texas and New York in coming weeks.

As concerns grow about potentially dangerous mutations in the virus, Biden aides view the vaccines less as a silver bullet and more as part of a complementary series of moves that taken together offer the prospect of real progress.

And for the U.S. to fully contain the problem, Dr. Anthony Fauci, the nation’s top infectious disease expert, has warned that the pace of vaccinations must increase globally to curtail the mutants.

“We’re not going to sugarcoat in any way how hard this is, but we’re going to demonstrate clear evidence of progress and action,” Zients said.

Dr. Anthony Fauci, the nation’s leading infectious disease expert, joined LX News for a wide-ranging conversation that touched on the new COVID-19 variants, the difference between working with the Biden and Trump Administrations, his newfound fame and the moment in 2020 that made him cry.

Biden is already well on pace to exceed his goal of 100 million vaccinations in his first 100 days in office. It’s an assuredly achievable goal that some consider inadequate but also a break from the off-base predictions of the Trump administration that undercut public confidence. According to the Centers from Disease Control and Prevention, at least 26 million doses have been administered in Biden’s first three weeks in office.

Much of the improvement in vaccination deliveries so far has been due to long-planned manufacturing ramp-ups, not the actions of the Biden team, aides acknowledge. But with the prospect of a third vaccine receiving approval in coming weeks, they are trying to anticipate and eliminate the next set of bottlenecks, when capacity to deliver injections and demand for vaccines become limiting factors.

Wen urged the Biden administration to set more aggressive targets — a moon shot — to increase the pace of vaccinations to 3 million per day. “I think they just need to be a lot more ambitious when they talk to the public,” she said.

Beyond the focus on sheer numbers of shots delivered, there is question of whose arms.

President Joe Biden is expected to sign new travel restrictions in a bid to control the spread of coronavirus in the United States. Restrictions will primarily target countries like South Africa, Brazil and much of Europe, where new strains of the coronavirus have emerged in recent days.

Biden’s team has taken an increased role in determining where each vial of vaccine goes, with an eye on ensuring that lower-income, rural and minority communities are covered, an implicit criticism of how some states have handled their rollouts.

New distributions to community health centers, announced Tuesday, and a 1 million weekly dose pharmacy program being rolled out this week will allow the White House to directly steer vaccines to underserved communities.

The ideas are not without their critics. On a call with the White House on Tuesday, Arkansas Gov. Asa Hutchinson appealed to the administration to work through states rather than alternative distribution avenues, arguing they have excess demand they already can’t meet. Other governors expressed concern that the federal program would upend their own plans to use those health centers to distribute vaccines.

“While governors appreciate the federal partnership, it is important that any increase in manufacturing capacity for vaccines should go to the states for distribution and not duplicated through separate federal programs," Hutchinson told the AP.

President Joe Biden has said he is launching a “wartime” strategy to defeat the COVID-19 pandemic. And former FDA Associate Commissioner Peter Pitts said the early steps from the incoming administration show that Biden is working more closely with state and local governments, and putting science ahead of politics.

The White House has defended them as pilot programs that can be scaled up to more sites with more doses if they prove to be effective.

In one key instance, the more hands-on federal response has meant the Biden White House has taken a step back.

Where the Trump White House got involved in editing CDC guidance for businesses, travel and schools — prompting complaints about meddling with science and leading some states to adopt their own more stringent protocols — the Biden administration is leaving it to career scientists to craft policies.

New, more prescriptive federal guidance on schools is expected as soon as Friday. While Biden in December promised that “the majority of our schools can be open by the end of my first 100 days,” his administration has since narrowed that goal to cover just K-8 schools, and even then, plans to count success as being open just a single day per week.

That's drawing criticism from some Republicans who say Biden is setting the bar too low and for ignoring the lessons of schools that have remained open for most of the pandemic.

One early success of the Biden plan was born out of conversations with governors frustrated about constantly fluctuating vaccine supplies. The lack of certainty led some states to slow the administration of first doses to ensure enough second shots would be available if deliveries dropped. Biden’s team pledged to give states three weeks notice on what's coming their way.

“We now see more vaccine on the horizon than we did a few weeks ago," Ohio Gov. Mike DeWine, a Republican, told the AP. "The more we learn about more vaccine the happier I am."

Early reviews from the public of Biden’s response have been largely positive.

Two weeks into Biden’s administration, a Quinnipiac poll showed 61% of Americans approving of the way the president is handling the coronavirus pandemic. Nearly all Democrats and 33% of Republicans said they approve. In a December Quinnipiac poll, 39% of Americans approved of the way President Donald Trump was handling the coronavirus pandemic. Seventy-eight percent of Republicans, but just 3% of Democrats, approved. 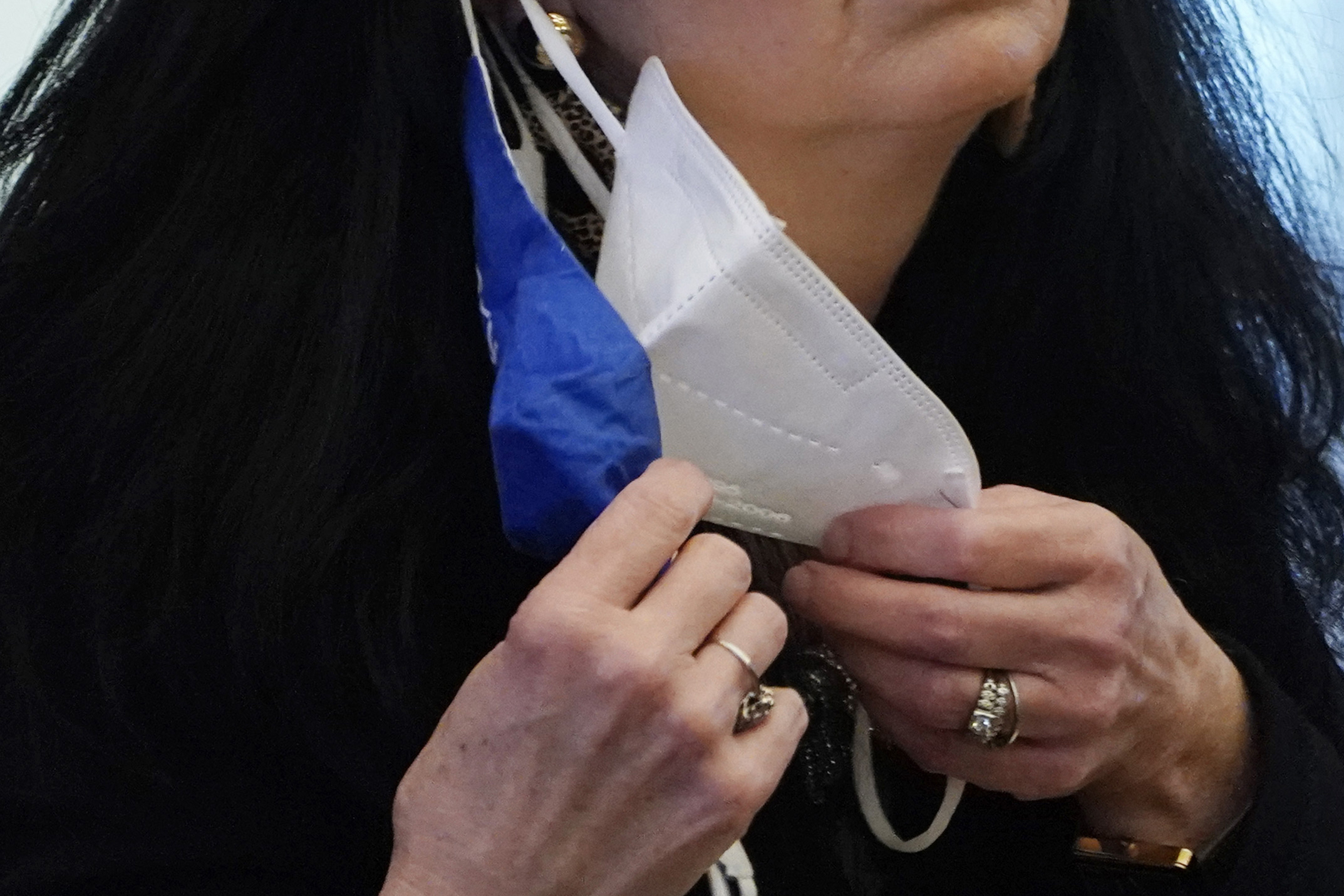 CDC Study Finds Two Masks Are Better Than One Vs. COVID-19 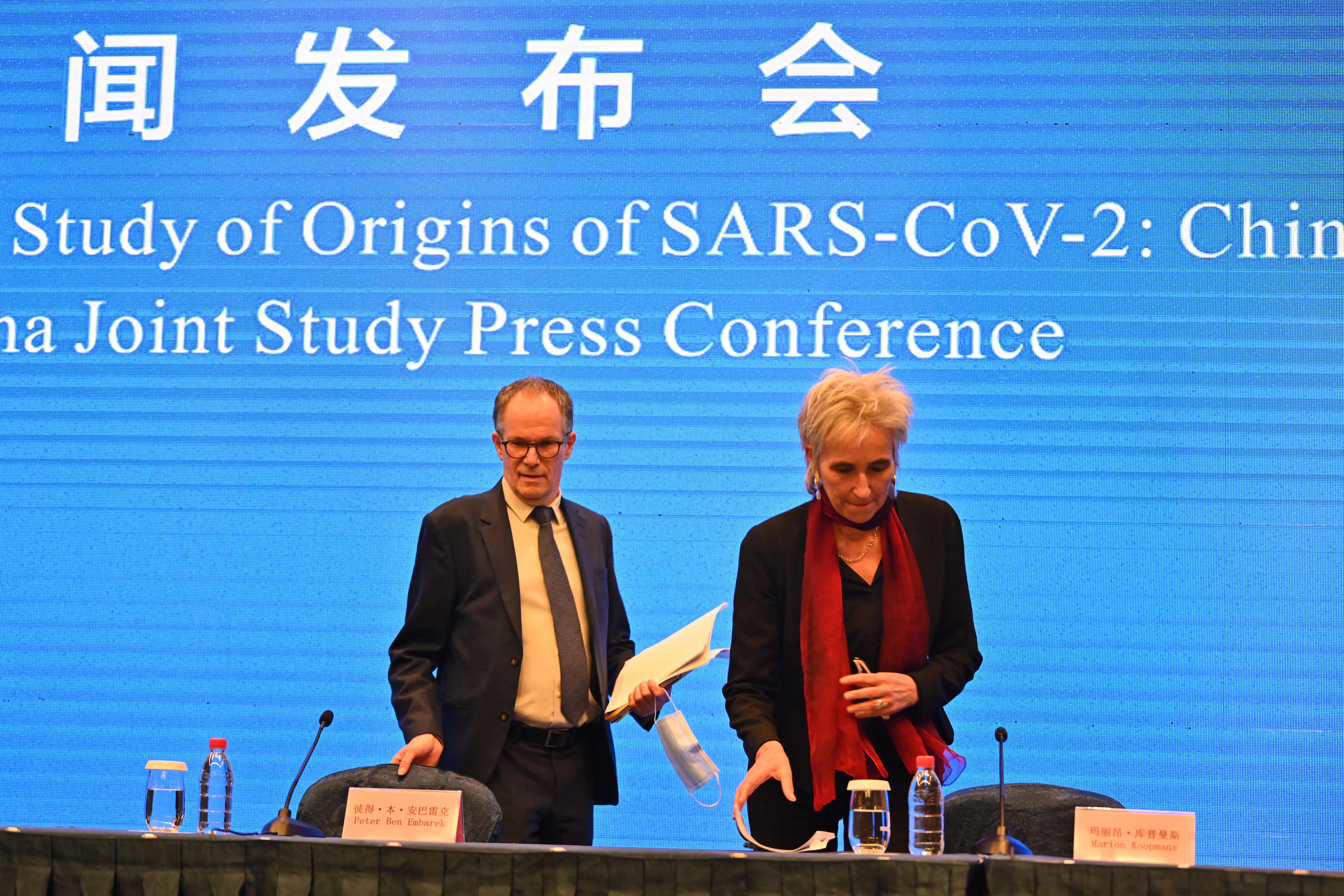 EXPLAINER: What the WHO Coronavirus Experts Learned in Wuhan

Biden’s national strategy for the pandemic, released on his second day in office, provides the roadmap for the months ahead: more testing, clear guidance, and more and equitable vaccinations.

But the path to a “new normal” is still unclear. The science on what will be necessary to achieve “herd immunity,” particularly with the rise of new mutations, remains unresolved.

The Biden team is already actively working with pharmaceutical companies to prepare “booster” shots for the variants, potentially annually, like flu vaccines. And they’re building the infrastructure to ramp up testing for the virus, given that testing could be part of life for years to come.

Biden’s call for Americans to wear a mask for his first 100 days will undoubtedly be extended, aides said. And his other goals are likely to be adjusted upward in coming months.