An elected official in New Mexico who helped found the group Cowboys for Trump is headed to trial in Washington next week on a charge related to the violent insurrection at the U.S. Capitol. He plans to show up for court on horseback in a defiant show of support for former President Donald Trump.

Otero County Commissioner Couy Griffin has been charged with knowingly entering restricted areas of Capitol grounds, one of hundreds of pro-Trump supporters facing charges for disrupting the certification of Joe Biden's 2020 presidential win. His trial will be the second among the hundreds of people arrested in the riot.

He's one of at least 10 people charged in the riot who either held public office or ran for a government leadership post in the two and a half years before the attack. They include candidates for mayor in west Texas, city council in Kansas and West Virginia, county commission in Washington state, congressional seats in Florida and statehouses in Pennsylvania, New York and West Virginia. Another Jan. 6 defendant is running this year for a congressional seat in New Hampshire.

Seven of the 10 defendants were accused of entering the Capitol building, and at least five had expressed doubts about the legitimacy of the presidential election. False claims about election security have become prevalent in Republican circles, and the outcome of Griffin's trial could create political problems for other elected officials ensnared in the massive prosecution.

Griffin has been in office since 2019 and is one of three elected officials responsible for management, administration and budget. During his time in office, he also served on the county’s board for canvassing local election results.

In 2019, he helped found Cowboys for Trump with a group of rodeo acquaintances to spread a conservative message about gun rights, immigration controls and abortion restrictions. Many of those messages were delivered on horseback.

Griffin, a former rodeo rider and former pastor, plans to drive his horse “Red” to the nation's capital, as he has in earlier outings in Washington with the group, and then ride the animal to the courthouse.

He rejects Biden's 2020 election and believes Trump to be the real winner, despite a lack of evidence and statements by elected officials, local elections leaders and Trump's own attorney general that the results were correct.

Griffin voted in January with his county commission to hire a private contractor to review the 2020 presidential election in Otero County — where Trump won with a 62% share — with door-to-door canvassing that has triggered concerns about voter intimidation. The review is still being conducted.

Prosecutors have submitted a variety of images that show Griffin breaching barricades on the day of the 2021 insurrection — climbing a toppled fence and another barrier to access the Capitol steps. Images taken by Griffin’s own videographer show him reveling in the Jan. 6 crowd and using a bullhorn to lead the throngs in prayer.

Matthew Struck, the videographer who accompanied Griffin, has been granted immunity and is expected to testify at the trial, prosecutors said in a filing Thursday.

He doesn’t deny that he was at the Capitol on Jan. 6, 2021; he admits he entered a barricaded area to reach an outdoor balcony of the Capitol on the afternoon without going inside the building.

But his attorneys have demanded that prosecutors provide first-hand evidence that then-Vice President Mike Pence was still at the Capitol — a prerequisite for the U.S. Secret Service to invoke access restrictions. 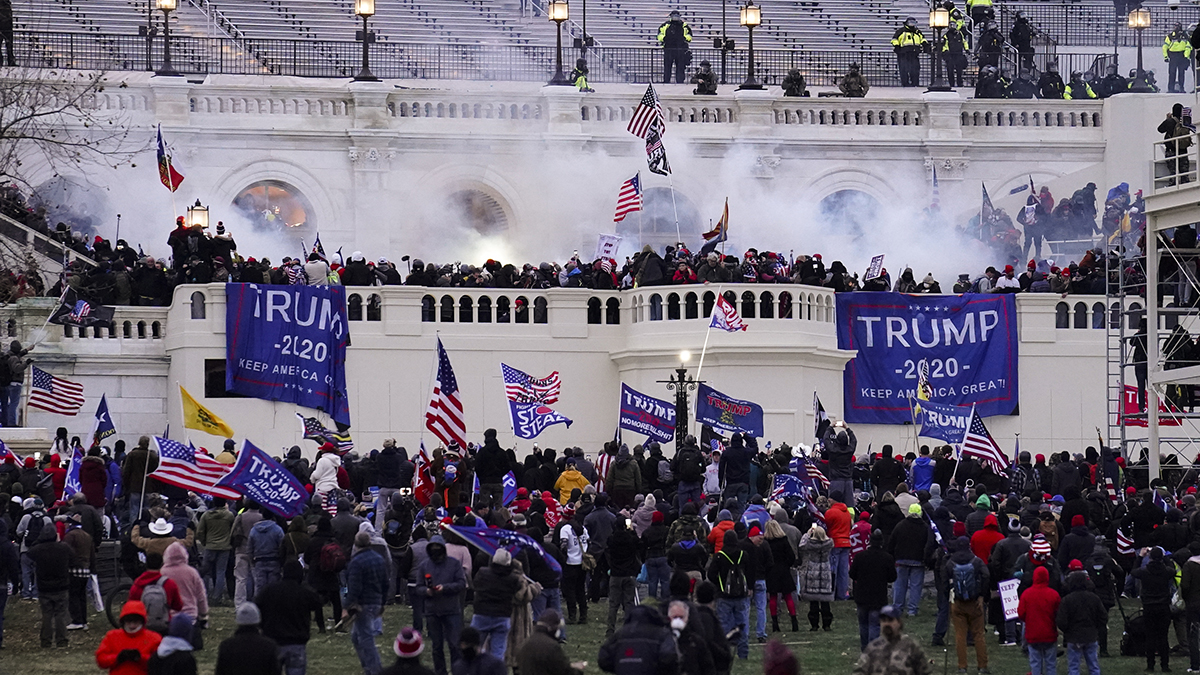 Prosecutors say Pence’s exact location at the time the county commissioner entered the Capitol grounds is irrelevant — and that the Secret Service shouldn’t have to disclose sensitive security information concerning the riot response.

“People are charged with entering an unauthorized zone and it might not have been an unauthorized zone to begin with — that’s the legal question right now,” Griffin said in an interview with The Associated Press. “It’s really a shame on Mike Pence’s part — individually and personally — he should step up and let us know what time he left the building, unless he’s trying to defend the government and trying to continue to make patriots suffer.”

U.S. District Court Judge Trevor McFadden ruled that prosecutors must call a witness to testify who has first-hand knowledge of Pence’s whereabouts during the attack if they want to try Griffin on a charge of entering and remaining in a restricted building or grounds. Earlier, McFadden rejected Griffin’s accusations of misguided and discriminatory prosecution.

Griffin was arrested on Jan. 17, 2021, by Capitol Police after he returned to Washington in opposition to Biden’s election and inauguration. He spent nearly three weeks in jail before his release pending trial.

Back at home in southern New Mexico, Griffin withstood a recall election attempt. State election regulators sued Griffin over his refusal to register Cowboys for Trump as a political group. Griffin says the group is a for-profit business and that he worries about contributors being identified and harassed.

In early March, Griffin confirmed that he won’t seek election this year as a commissioner or otherwise compete in the 2022 election cycle, saying he had lost faith in the political system.

The fate of other politicians remain unclear. A former legislative candidate in Pennsylvania is now in prison on a 60-day sentence for his presence inside the Capitol building during the riot. A former West Virginia lawmaker who resigned his office three days after joining the mob into building is charged with one count of civil disorder and due in court on Friday.

Over all, at least 765 people have been charged with federal crimes related to the Capitol riot.At least 231 of them have pleaded guilty, mostly to misdemeanors. At least 119 riot defendants have been sentenced, with 50 of them getting terms of imprisonment of jail time already served.

Approximately 90 others have trial dates. The first trial of a rioter ended with a conviction on all counts.