President Donald Trump trolled his political enemies Wednesday in the first of three rallies in three days in the West as Democrats vied in neighboring Nevada to be the one to challenge him in the November election.

"I hear he's getting pounded tonight — you know he's in a debate," Trump said about the man he has dubbed "Mini Mike" because of his short stature. "I hear that pounding. He spent $500 million so far and I think he has 15 points. Crazy Bernie was at 30."

He gleefully derided Massachusetts Sen. Elizabeth Warren as "Pocahontas" for her past claims of Native American heritage and claimed her presidential campaign had stalled. "Fortunately she self-destructed anyway," Trump said.

Arizona is a 2020 battleground state, but Democrats think with a little luck, the state could be in play.

The state is home to Republican Sen. Martha McSally, who stood by the president during the Senate's impeachment trial. In her rally remarks McSally mentioned her Democratic opponent Mark Kelly, who has said he'd back Sen. Bernie Sanders if he is the party's nominee.

"Mark Kelly is flying on Bernie Sanders’ wing and I’m flying on your wing, President Trump," she said.

President Trump is facing rare disapproval from some of his most loyal allies: Attorney General William Barr and Senate Republicans.

Trump was on stage for more than an hour and 20 minutes. Before he arrived at Arizona Veterans Memorial Coliseum, a crowd of protesters swelled into the hundreds. A large contingent of migrant rights advocates waved signs declaring "Dump Trump" and "Power to the people!"

After the president left, the Trump protesters, in a "free speech zone" near the coliseum, were confronted by Trump supporters. Lots of yelling ensued as tensions flared, but no signs of violence.

The president's four-day, four-state trip features big-dollar fundraisers, back-to-back-to-back campaign rallies and a sprinkling of official presidential events. It's an unusually long domestic trip for Trump, who prefers to sleep in his own bed.

Next best: He's sleeping each night at his own hotel just off the Las Vegas Strip and making day trips to California, Arizona and Colorado. On Thursday, Trump will host a rally in Colorado Springs for another vulnerable Republican, Sen. Cory Gardner. On Friday, Trump will appear at a rally in Las Vegas.

Trump didn't wait until evening to start his counter-programming, weighing in on his Democratic rivals via Twitter. Earlier in the day, Trump took a swipe at Bloomberg, who was criticized in 2016 for saying at Oxford University, "I could teach anybody, even people in this room, no offense intended, to be a farmer." The former New York mayor continued: "It's a process. You dig a hole, you put a seed in, you put dirt on top, add water, up comes the corn."

"Mini Mike hates the farmer," Trump said. "Never mind, I don't think he's going to be the candidate anyway, to be honest with you."

Trump began his day with an unscheduled stop at a fundraiser in the gold-plated lobby of his hotel, where his son Donald Trump Jr. was the headliner. Then he hopped over to the Rancho Mirage, California, estate of billionaire Oracle co-founder Larry Ellison to raise more cash. The estate includes the Porcupine Creek private golf club, the site of a Trump campaign golf outing and fundraiser. 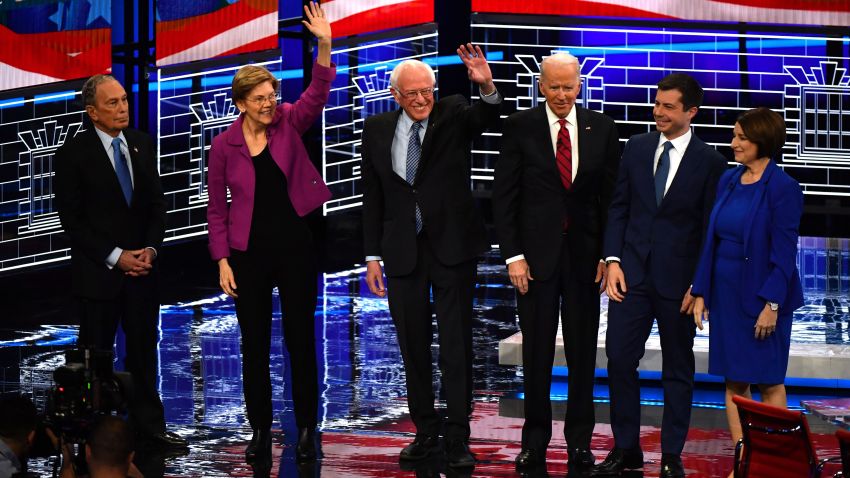 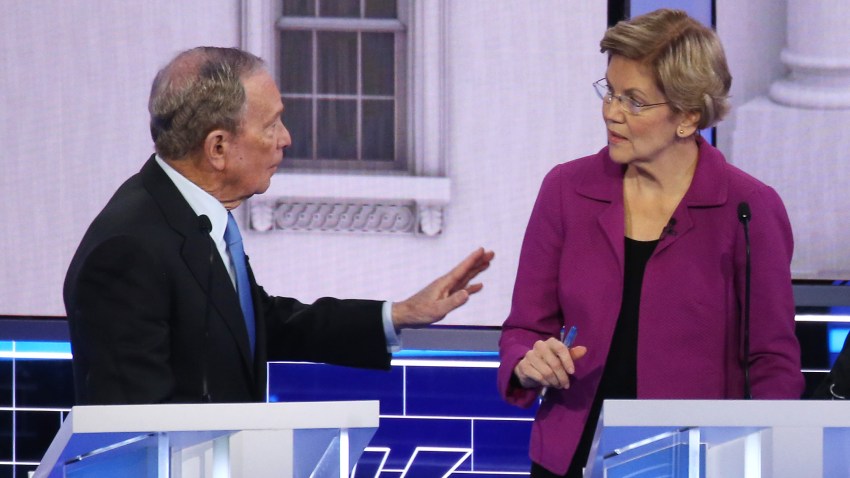 The president was expected to raise $7 million at the fundraiser, according to a Republican official familiar with the planning of the events but not authorized to speak about it publicly. Trump raised a similar sum Tuesday night in Beverly Hills. That money will be split among his campaign, the Republican National Committee and 22 Republican state parties.

California Republican National Committeeman Shawn Steel said Wednesday that the president used his Beverly Hills event to talk at length about how he ignored common wisdom and targeted Michigan in the 2016 election, despite its history of siding with Democratic presidential candidates in recent decades. Trump narrowly carried the state over Hillary Clinton.

Trump did have a policy component to his schedule for the day: a visit to Bakersfield, California, the hometown of House Republican leader Kevin McCarthy. The president signed his administration's reworking of environmental regulations that will direct more of the state’s precious water to wealthy farmers and other agriculture interests in the Republican Central Valley stronghold.

During his 2016 campaign, Trump was an outspoken critic of federal rules meant to ensure that enough fresh water stayed in rivers and the San Francisco Bay to sustain more than a dozen endangered fish and other native species, which are struggling as agriculture and development diverts more water and land from wildlife.