The American Athletic Conference's women's basketball tournament is being played this weekend at a resort casino in Connecticut and it is a good bet UConn will win its third straight conference championship.

The Huskies have dominated the AAC over its three-year history, winning all 60 of their league games by double digits. The closest call was an 84-70 win over South Florida in last year's conference final.

Off the court, coach Geno Auriemma and forward Breanna Stewart on Friday picked up their third consecutive trophies as the league's coach and player of the year. Three Huskies — Stewart, Moriah Jefferson and Morgan Tuck — were named first-team all-conference. 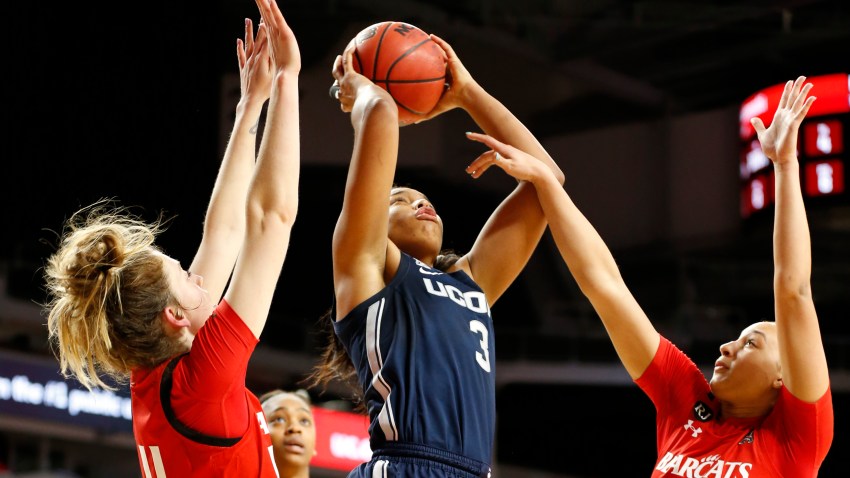 UConn, which is on a 66-game winning streak, is beating conference opponents by an average of 45.6 points, about six points more than their overall margin of victory.

"It's not just our conference," AAC Commissioner Mike Aresco said. "It's a national phenomenon. They have beaten some of the best teams in the country by double-digits. It reminds me of when Florida State joined the ACC in football and I think won their first 42 games. Eventually other teams caught up."

No. 20 South Florida is the only AAC team to give UConn a game this season. The Bulls led 25-24 at halftime on Monday night, before falling to the Huskies by 20 points in Storrs.

USF coach Joe Fernandez isn't ready to say his Bulls have arrived at UConn's level. But he said he's noticed a change in the team's mindset, which is no longer surprised when it competes with the Huskies.

"There's now anger when you lose," he said. "It's great that our kids believe they can compete. Our goal is be where (the Huskies) are at and to beat them."

"We're not there yet," Auriemma said. "We're not at the level yet where you can say I think our teams can compete, day in and day out, with the best teams in the country. But we're better than two years ago."

UConn plays its first game Saturday against East Carolina, which beat Cincinnati 70-61 in the opening round Friday. The Huskies beat the Pirates by 42 and 43 points in their two regular-season meetings.

A win Saturday afternoon would give the Huskies their 11th straight 30-win season and 21st in program history.