Watch all the action from the Beijing Olympics live on NBC
U.S. Figure Skating Championships

The U.S. Olympic figure skating roster will be finalized this weekend

The team will be finalized this weekend at the U.S. Figure Skating Championships, held in Nashville.

Timothy LeDuc and Ashley Cain-Gribble made a strong case to go to Beijing with their record-setting pairs performance on Thursday. They earned 79.39 points for their short program, almost two points ahead of the closest competitor and nearly nine better than the previous U.S. Championships record. 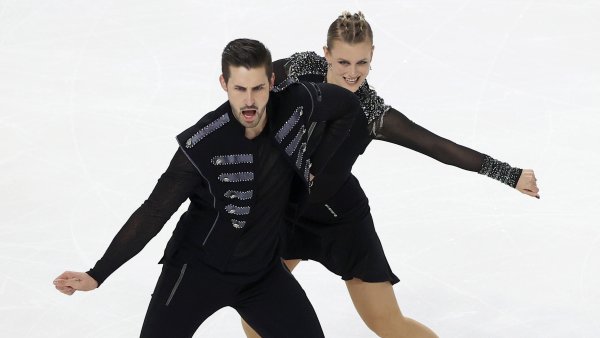 Here’s everything you need to know about how to watch the final competitions this weekend:

When are the U.S. Figure Skating Championships?

The U.S. Figure Skating Championships began Thursday in Nashville and will run through Sunday. You can find the full schedule here.

What is the U.S. Figure Skating Championships TV schedule?

All events at the U.S. Figure Skating Championships will air live on NBC-owned networks, including USA and NBC. They will also be streamed on Peacock and online at NBCOlympics.com. Here’s the full TV schedule:

Who will make the U.S. Olympic figure skating team?

The U.S. Olympic figure skating team will be determined on Sunday following the final competition.

LeDuc and Cain-Gribble appear poised to make Team USA after their performance on Thursday, but who could join them? The U.S. will have two pairs make the Olympic roster. Jessica Calalang and Brian Johnson are just behind LeDuc and Cain-Gribble, and Audrey Lu and Misha Mitrofanov are currently in third.

Beyond the two pairs, the U.S. has three Olympic spots available for men, women and ice dance.

Nathan Chen, the 22-year-old, three-time World Champion, is expected to make his second Olympic appearance in Beijing. Vincent Zhou and Jason Brown have joined him on the U.S. team for every world championship in this Olympic cycle, so one could infer that that will be your men’s trio for Beijing.

The women’s group isn’t as easy to nail down entering this weekend. Alysa Liu, who at 13 was the youngest U.S. women’s champion in 2019, is the top-ranked American this season. She’ll have some stiff competition in Karen Chen (a 2018 Olympian), Mariah Bell and Amber Glenn, the latter two of which are the last two U.S. silver medalists.

For ice dance, the U.S. has two medal-contending couples in Madison Hubbell-Zachary Donohue and Madison Chock-Evan Bates. Those two pairs have a combined five national titles. The third Olympic spot is still up for grabs, with the pairs of Kaitlin Hawayek-Jean-Luc Baker and Caroline Green-Michael Parsons expected to contend.