College Football Players Left in Limbo as Seasons Get Pushed

Even with a planned spring season, uncertainty remains for athletes

Or in the winter. Or even the spring.

He just wants to pull on his shoulder pads one last time, run onto the field in front of thousands of adoring fans, and experience the thrill of college football. It doesn't matter much to Thompson whether flurries are flying or birds are chirping, he just wants an opportunity that the spread of COVID-19 is threatening to take away from him.

Thompson was speaking Tuesday, just as the Big Ten was announcing the cancellation of fall sports and exploring the option of playing football in the spring. Word soon trickled out that the Pac-12 would be following suit, joining mid-majors such as the Mid-American Conference and Mountain West in punting on a traditional college football season. 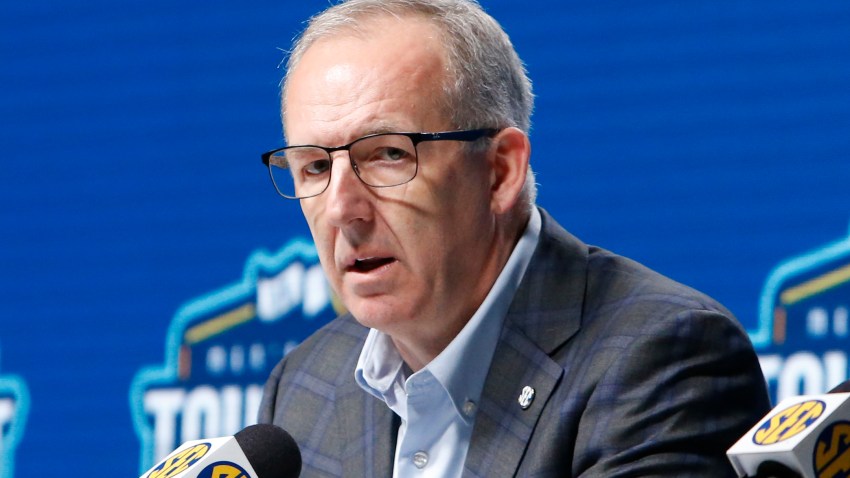 The Big 12, where the Wildcats play, had not yet made a decision. But as the dominoes begin falling across college sports, it is becoming increasingly unlikely that any of the Power Five schools step on the field next month.

“I want people to be safe. I'm not oblivious to what's going on,” Thompson said. “But the end of the day, speaking for everybody, it would be nice to have answers, and not just have things pushed around. There's so much uncertainty every single day — how things can change in 24 hours — it's very hard on a player. I think if we were just to get some answers, we would be able to process what that would look like, whether that's what we want or not.”

Many high-profile college players, including Clemson quarterback Trevor Lawrence, have made it clear they want to play this fall. Lawrence was joined by Ohio State quarterback Justin Fields, Oklahoma State running back Chuba Hubbard and numerous players from Florida State, Oregon and other high-profile schools over the weekend in using their social media accounts in an attempt to save the fall season — and be part of the decision-making process.

“We all want to play sports this fall. Every athlete, I’m pretty sure, wants to play their sports,” Michigan defensive back Hunter Reynolds said. “They just want to do so safely.”

President Trump even weighed in on the controversy Tuesday, repeating his call for football to happen this fall.

With the United States now topping 5 million coronavirus cases as school district reopen across the country, a growing number of children are becoming infected. More than 97,000 children tested positive in just the last two weeks of July, according to the American Academy of Pediatrics.

But the decision rests not in the hands of players or politicians but those of university presidents, who must weigh the health and safety of their students against other considerations, among them the significant financial repercussions of not having a college football season.

“This was an extremely difficult and painful decision that we know will have important impacts on our student-athletes, coaches, administrators and our fans,” Pac-12 Commissioner Larry Scott said. “We know nothing will ease that.”

Pac-12 players at least know they won't be playing this fall. The spotlight now turns to leagues that have yet to make a decision, and then to all administrators again as they begin wrestling with the prospects of spring football.

“It's been a hard road not knowing whether we're going to play or not,” said Kansas State linebacker Justin Hughes, who was looking forward to his senior season after missing much of last year to a knee injury.

“We have one last go-around. Don't take it away from us — a year away from us — because there's a tragedy going on right now,” Hughes said. “We want to do the thing we love safely, and whatever it takes to do that we'll do it.”

The NBA is back. So is Major League Baseball and professional hockey is on the horizon. Sports reporter Will Carroll breaks down what fans can expect and what key concerns remain as professional sports attempts a major comeback in midst of the pandemic.

Simply pushing college football to the spring is hardly a cut-and-dried answer. Nobody knows whether there will better treatments or even a vaccine by then, and the state of the world could be much the same as it is right now. And for those players who have NFL aspirations — Lawrence, Hubbard and many others — the prospects of risking injury by playing up until the draft almost certainly means many high-profile stars will ultimately opt out.

No wonder the fear among many college football players is not just of a lost fall but a lost season entirely.

"I need this season. This is my last season," said Syracuse tight end Chris Elmore, who was awaiting word from the Atlantic Coast Conference on whether it will play this fall. “This could be a make-or-break for me to see whether I go to the next level or not. I'm committed to playing until they pull the plug on me.”