Red Wings ‘blown' away; Canucks get their boring on

The Detroit Red Wings were jobbed, hosed, robbed, disrespect -- really, pick your terms of non-endearment -- when referee Brad Watson and his intent to blow an early whistle wiped out a Marian Hossa(notes) game-tying goal late in the third period at the Anaheim Ducks in Game 3.

The replays are around the 3:30 mark of this NHL video; for the impatient, the YouTube of TSN's coverage is here. The puck's in the net before the whistle, but Watson already ended the play in his brain. And it's not a reviewable play in the NHL.

The officiating overall last night stunk for both teams. But only one of those teams saw a goal by Marian Hossa (which could have kick-started his dormant game) kept off the board because -- no [Gretzky] -- "a combination of the black puck and the black pants may have been a factor."

That's right: A team wearing NHL cash register approved black-on-black gets the break, while the Original Six team that steadfastly refuses to sully the sweater with a modern makeover or a third jersey gets a boot to the berries.

Premature whistles during a scrum in front of the net have been a pox on these playoffs. Worse yet have been the instances of "Intent To Blow," in which the referee has ended the play with his mind before an ounce of lung power has entered his whistle. Like in Game 4 of the St. Louis Blues/Vancouver Canucks series, in which a Blues goal wasn't allowed and they were later summarily dismissed from the playoffs in overtime.

MLB to Require Housing for Some Minor Leaguers, a ‘Historic Victory,' Advocates Say 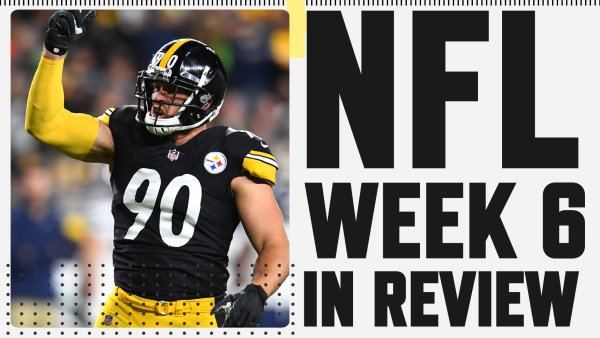 All The Takeaways From Week 6 of NFL Action

Sure, as Romig said, early whistles happen and you just hope they don't happen to your team. Doesn't make it right; and it doesn't change the fact that "Intent To Blow" runs counter to the NHL's primary doctrine for its officials, which is to support and nurture offense while restricting defense.

Obstruction, the puck over the glass rule, the goalie trapezoid, no change on an icing, the leeway given to players who crash the crease ... all of it encourages scoring. Which makes the hair-trigger ending of hockey plays by an eager beaver referee such an annoying anomaly. And what's the sense of having a second referee on the ice to make the calls the first referee isn't in a position to make if he can't overrule "Intent To Blow" on plays like last night's?

No wonder Michael Rosenberg of the Freep appears to be losing his mind last night.

More on the Ducks' 2-1 victory later. But first, it's refreshing to see the Vancouver Canucks still care about their goalie.

You can get a little lazy defensively when you've got Roberto Luongo(notes) back there ... until you realize he's given up eight goals in the first two games of a playoff series, and your blue line is missing Sami Salo(notes).

So full marks to the Canucks last night for skating into the Chicago and boring the piss out of everyone with a stingy defensive effort, resulting in their 3-1 Game 3 victory.

While they didn't exactly provide a promotional video for the new NHL, the Canucks did provide a comprehensive lesson in neutralizing the high-flying Hawks with a meticulous game plan and a suffocating team defence Tuesday night.

After surrendering a shocking six goals in the final 30 minutes of a 6-3 home-ice loss in Game 2, the Canucks micro-managed their way to a 2-1 series lead with a textbook display of dead-puck era hockey; choking off the neutral zone, closing the elephantine gap between their forwards and defence and making low-risk, high-percentage plays all over the ice. Oh yes. And Roberto Luongo stopped 23 of 24 shots.

If that sounds familiar, it should because it's the game the Canucks played two years ago when they bored the rest of the NHL into submission. Apparently, it still has the desired effect because the Blackhawks were limited to 14 shots through two periods and just 24 all told as the frenzied sellout crowd was mothballed along with the Hawks' attack.

Not only that, but the Canucks dominated every Hawk in the faceoff circle save for Jonathan Toews(notes) and committed to clearing the crease in front of Luongo. The Blackhawks were collecting garbage for the first two games, and Vancouver finally decided to give their captain some support. Meanwhile, they crashed the Blackhawks' crease to score a couple of goals.

A few other thoughts:

• The injury to defenseman James Wisniewski(notes) of the Ducks last night was freaky. At first, it appeared he crumpled to the ice after an elbow. Later, replays showed he took a puck to the chest on an earlier shot. Stretchered off the ice, kept overnight in the hospital with a lung contusion. Yikes.

• The most underrated part of Jonas Hiller's(notes) game is his ability to see the puck through the Red Wings' otherwise daunting screens. In the third period last night, Detroit had players like Holmstrom and Franzen parked in front of Hiller; and he snagged shots like they weren't even there.

• We were sort of concerned Chris Pronger(notes) was going to pick up Pavel Datsyuk(notes) and throw him like a javelin after the game. Because he had that "Pronger look."