As Kalisz climbed out of the temporary pool, a masked-up Michael Phelps was there to greet him with an embrace

Even though he retired from swimming five years ago, Michael Phelps' impact was felt on the opening night of the U.S. Olympic trials.

Chase Kalisz, who says Phelps is like a big brother, claimed another trip to the Olympics by winning the 400-meter individual medley Sunday.

A masked-up Phelps cheered him on from the socially distanced stands, then strolled onto the deck to give his former training partner at the North Baltimore Aquatic Club a hug.

“Michael is very supportive,” Kalisz said. “He’ll give me a kick in the (butt) if I need it, and sometimes I need it. Michael has been an older brother to me in my life. I remember interacting with Michael when I was 6 years old — and here we are 21 years later.”

Phelps was impressed with Kalisz's performance.

“His back half was great,” Phelps told The Associated Press. “I thought maybe he would go a touch faster. But he’s right there. He took care of what he needed to do.”

The Americans got some new blood on women's side: 19-year-old Emma Weyant, in her first trials, held off three Olympic veterans to win a thrilling 400 IM.

Another Olympic rookie, Kieran Smith, shaved nearly 3 seconds off his previous personal best to win the 400 freestyle and claim his spot for Tokyo. 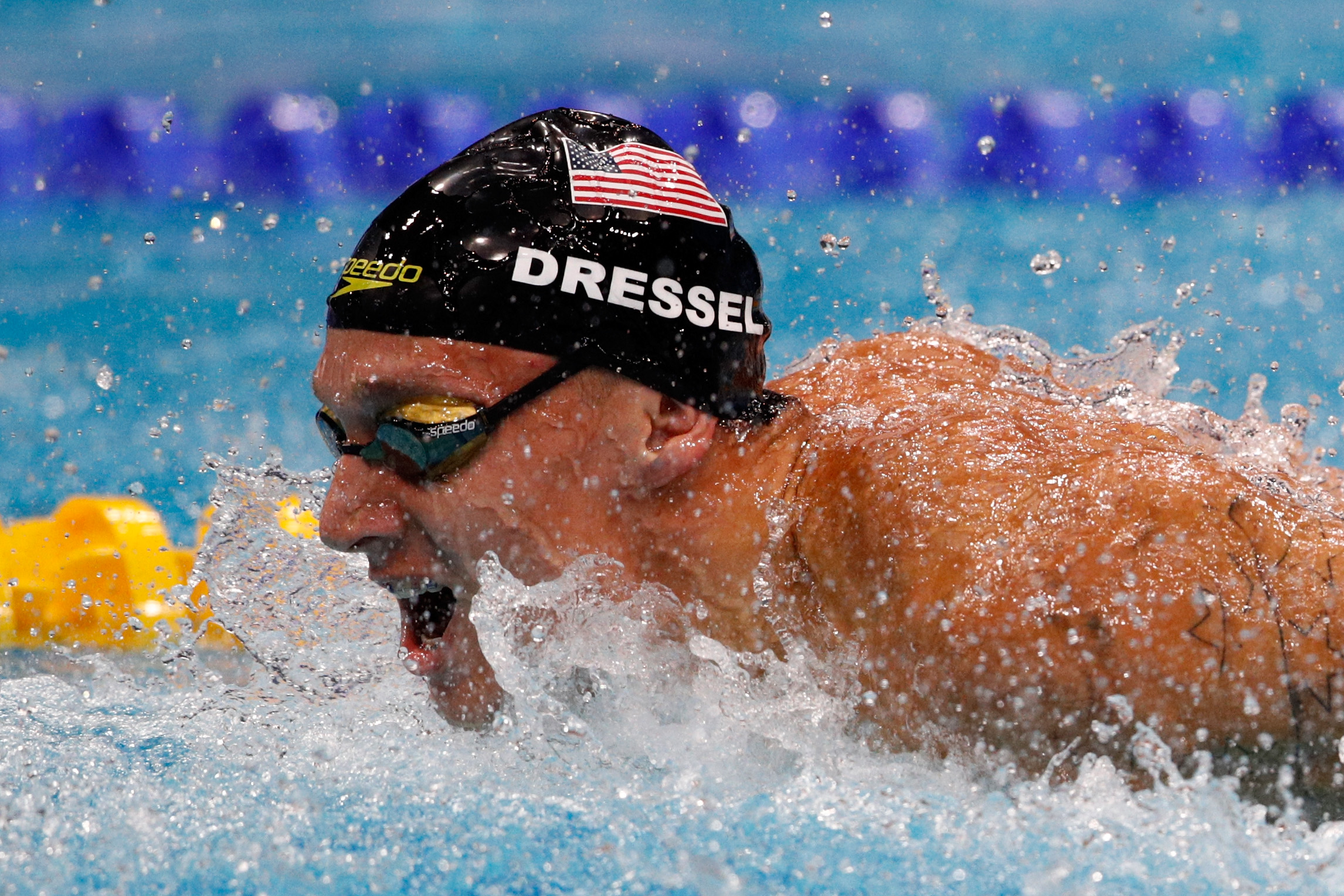 Dressel, Ledecky Lead Chase for Olympic Berths at US Trials 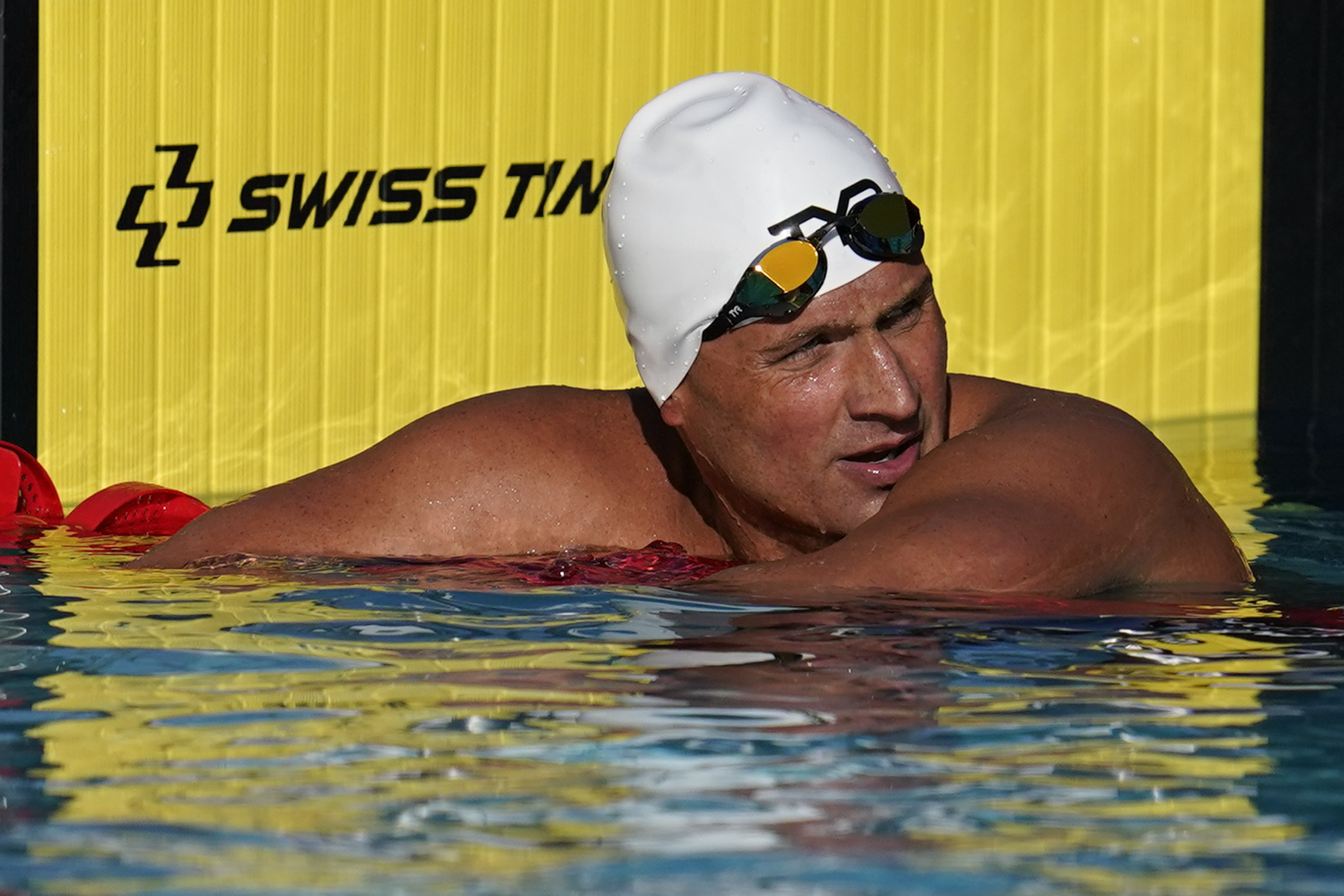 Kalisz trailed top qualifier Carson Foster at the midway point of the race after the butterfly and backstroke legs.

But Kalisz surged to the lead on the breaststroke and held it to the end through the freestyle, winning in 4 minutes, 9.09 seconds.

“I know where I need to be to make my move off the breaststroke,” the 27-year-old said.

Phelps, the retired in 2016 after winning a record 23 gold medals at the Olympics, said everyone at the trials should get a boost from racing before fans.

USA Swimming allowed roughly 50% capacity in the 14,000-seat arena, with cardboard cutouts occupying many of the empty seats.

Still, after more than a year without any fans in the stands, the atmosphere was a welcome change for the swimmers.

“You get that electricity from the fans," Phelps said. “I got goose bumps when I walked into the arena tonight.”

Olympic swimmer Caeleb Dressel took home two gold medals from Rio in 2016. Dressel explains how his philosophy of being one with his environment helps him excel.

Another 2016 Olympian, Jay Litherland, tracked down Foster over the final 25 meters to claim the expected second spot on the Olympic team in 4:10.33.

That ensured a couple of veterans were the first swimmers to claim spots on the squad that will head to the pandemic-delayed Tokyo Games with high expectations.

Kalisz took the silver in the 400 IM at the Rio Olympics, while Litherland finished fifth in that event.

Kalisz swam over to embrace Litherland after seeing they finished 1-2. They both attended the University of Georgia and still train together.

“It means the world to have my training partner with me,” Kalisz said.

The pandemic-delayed Olympics turned out to be a blessing for Kalisz, who didn't even qualify for the final of the 400 IM at the 2019 world championships. He was battling a shoulder injury and clearly not at full strength.

An extra year of training was just what he needed before taking on the grueling 400 IM at the trials.

Swimming legend Michael Phelps is working with Gen Z community members to make a positive impact around the world through Colgate's Optimism Project. The Olympian athlete talked to LX News about how he's learned to use the power of positivity to overcome challenges in his own life and career.

“I would definitely say so,” Kalisz said. “I don’t want to say I wasn’t prepared last year, because I was. But I’m 27 now. My body needs rest a lot more than it ever has.”

They posted the four fastest times in the world this year, a sign of America's strength and depth on the women's side.

Weyant said her strategy was “stick to my race plan and not worry about everyone around me. Stick to my strengths and always taking it home on freestyle.”

Flickinger, Margalis and Smith were members of the U.S. Olympic team in 2016, but Weyant bested them all.

“I’m not going to lie,” the teenager said. “I was really nervous, so I tried to get that out of my system (in the morning preliminaries). The plan tonight was just to race.”

He won in 3:44.86 but knows he'll need to go even faster to have a shot at a medal — especially against a powerful Australian squad.

At the 2016 Olympics in Rio de Janeiro, Katie Ledecky established herself as the new face of USA Swimming at 18 years old. Now, she's back following a successful college career at Stanford and is poised to dominate another Olympic games this summer in Tokyo, Japan.

Defending Olympic champion Mack Horton posted a faster time than Smith at his country's trials, and it wasn't even good enough to make the Aussie team.

“I'm really excited with that swim,” said Smith, whose previous best was 3:47.71. “I look forward to hopefully improving on that swim and being competitive with the rest of the world.”

No one else in the eight-man final went fast enough to meet the qualifying time for Tokyo.

Also Sunday, Michael Andrew set a pair of American records in the 100 breaststroke, going 58.19 in the morning prelims and even faster — 58.14 — in the evening semifinals.

He'll be the clear favorite in Monday's final.

“There’s a lot left in the tank,” Andrew said. “Maybe with the lights and cameras, I tried too hard going home. Hopefully I can fix that tomorrow.”

Backstroker Ryan Murphy is representing the USA at this year's Olympics in Tokyo. He tells LX News' Jobeth Devera about managing migraines throughout his swimming career, including a time on a flight in 2012 where he hurled on an Auburn coach.