Golden State won in Boston to claim another NBA championship

After a two-year NBA playoff hiatus, the Warriors have climbed back to the mountaintop and planted their flag at the summit.

For the fourth time in the last eight seasons, the Warriors are NBA champions after beating the Celtics 103-90 in Game 6 of the Finals at TD Garden in Boston on Thursday night.

As an organization, the Warriors now have won seven NBA titles, with five coming since the team relocated to the Bay Area from Philadelphia.

Curry, far and away the best player in the series, led the way with 34 points in the Warriors' series-clinching win and was named the NBA Finals MVP. "Game 6 Klay" dropped in 12 points to help the cause.

“We found a way to just get it done,” Curry said after the Warriors accepted the championship trophy and celebrated on the court.

With tears in his eyes and hoarse with emotion, Curry struggled to speak as he explained what allowed the Warriors to capture their latest crown.

“It’s part of a championship pedigree, our experience,” he said. “We built this for 10-11 years. That means a lot when you get to this stage.” 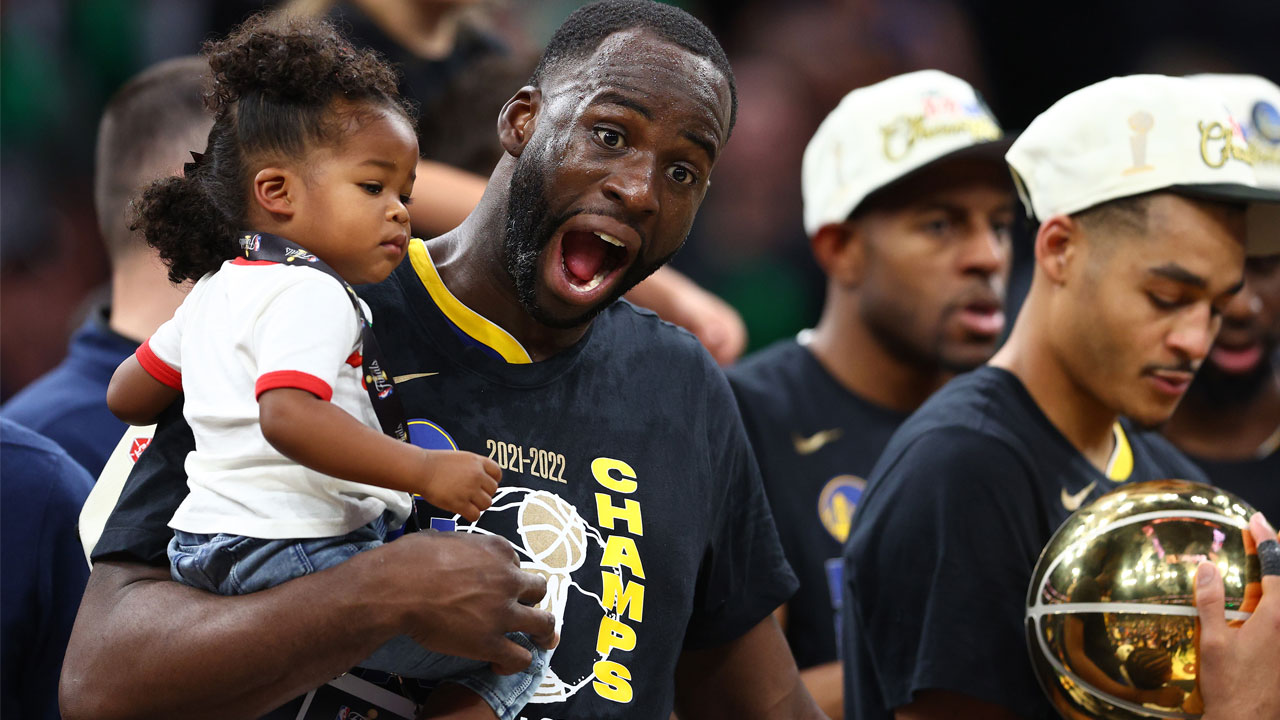 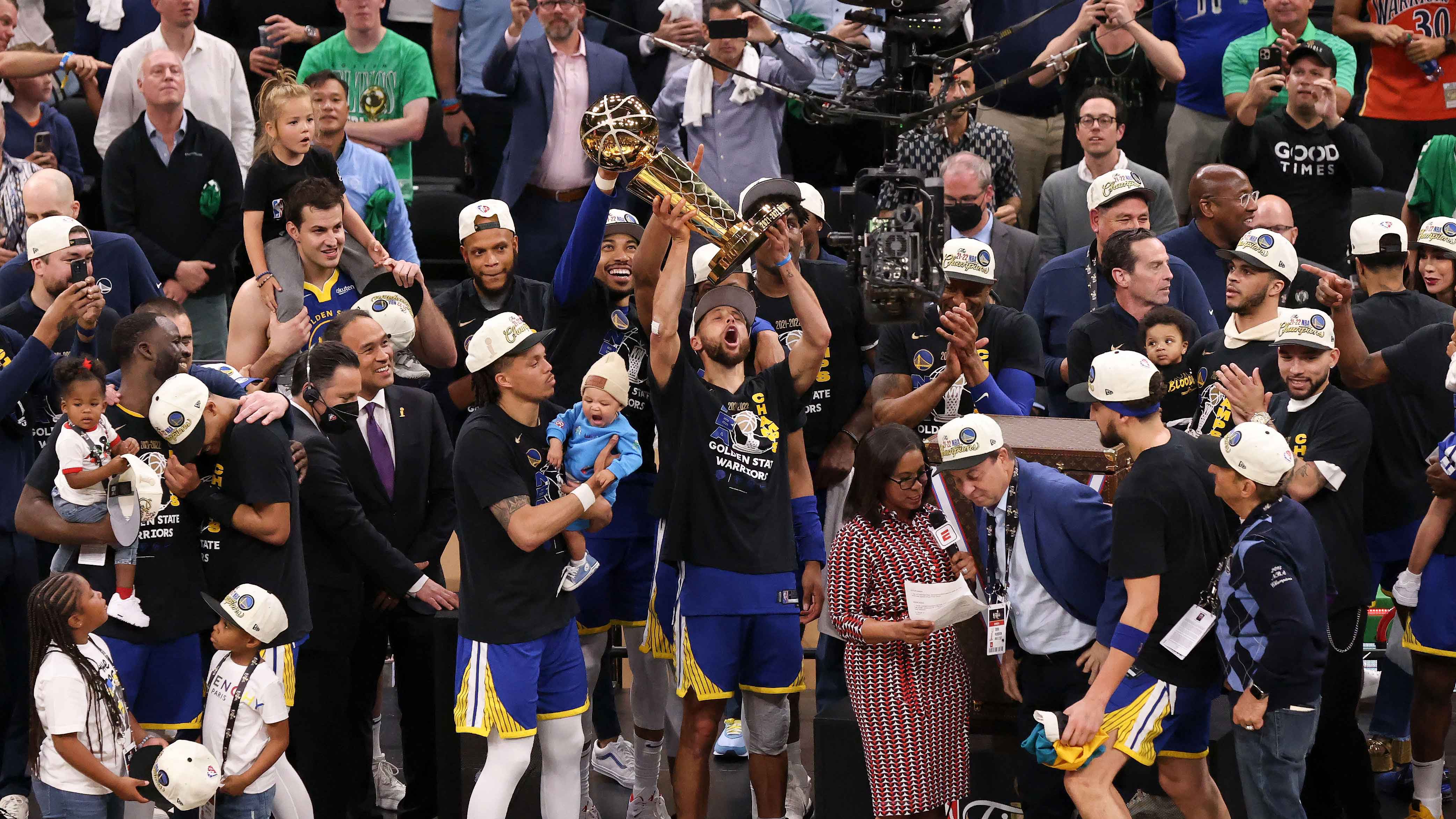 NBA Teams With the Most Championships After Warriors Beat Celtics

The Warriors' win is the culmination of a turbulent season that saw them finish third in the Western Conference after an 18-2 start. After beating the Phoenix Suns on Christmas Day, they were 27-6.

Thompson made his triumphant return on Jan. 9 after a 31-month injury absence, and while the Warriors won his first game back, it took a while for him to get fully comfortable. And as soon as he returned, Green left the lineup for two months with a back injury.

As soon as Green returned in mid-March, Curry suffered a sprained left foot against the Celtics on March 16 and missed the rest of the regular season.

Considering Curry, Thompson and Green had played just 11 minutes together during the regular season, the Warriors didn't know what the team would look like once the playoffs began. But just like old times, the core players gelled quickly, along with Andrew Wiggins, Jordan Poole, Kevon Looney and the rest of the bench unit.

The Warriors dispatched the No. 6 seed Denver Nuggets in five games, took down the upstart No. 2 seed Memphis Grizzlies in six games and knocked out the No. 4 seed Dallas Mavericks in five games to punch their ticket back to the NBA Finals for the first times since 2019.

The Finals series against the Celtics wasn't easy, and after dropping Game 3 in Boston, it looked like the Warriors' season was teetering on the brink of disaster. But Curry dropped an incredible 43 points in Game 4, saving the season and shifting the momentum of the series. Wiggins was the star of Game 5, helping the Warriors move within one game of the championship.

After defeating the Boston Celtics in Game 6 of the 2022 NBA Finals and taking home the title, Steph Curry was awarded the NBA Finals MVP.

But the hardest game of a playoff series to win is the closeout game, especially on the road. For the Warriors, though, they aren't scared by a hostile crowd. By winning Game 4, they now have won a road game in 27 consecutive series.

Winning Game 6 in Boston was icing on the cake, and the celebration at TD Garden, the flight home and in the ensuing days will be unforgettable for the players, coaches and executives.

To go from the lows of losing the 2019 NBA Finals to the Toronto Raptors in devastating fashion, enduring a 15-50 2019-20 season which also was cut short by the COVID-19 pandemic and two 2021 Western Conference play-in tournament losses last season to winning another NBA title has to be incredibly rewarding for the entire organization.

When whole, with Curry, Thompson and Green in the lineup, the Warriors have shown it's extremely hard to beat them. And they have another piece of hardware to prove it.

Next up for the Warriors, a parade back in the Bay Area to celebrate the fourth title of this dynastic run.