1 Dead, Over 675,000 People Without Power in Conn. After Tropical Storm Isaias

Tropical Storm Isaias is being blamed for at least one death in Connecticut after leaving widespread damage that knocked out power to hundreds of thousands of people in the state on Tuesday.

Isaias has moved out, but Connecticut received a significant amount of the strongest winds from the southeast side of the system. Peak wind gusts reached as high as 68 mph in Bridgeport and 66 mph in New Haven.

A Naugatuck man was killed when he got out of his vehicle to try to move branches off the road and a tree fell on him, according to Naugatuck police. The man, identified as a 66-year-old Naugatuck resident, has not been publicly identified.

This is one of the largest power outage events in the state's modern history, among the ranks of the October Snowstorm, Tropical Storm Irene, Hurricane Gloria, and Hurricane Sandy.

“We are aware of the significant number of outages across Connecticut, we are actively working to assess the damage across the state, and we have all of our crews, as well as additional resources ready to begin restoration as soon as it is safe," an Eversource spokesperson said.

Multiple Eversource customers reported delays or challenges in reporting outages to the utility company Tuesday evening. The company confirmed that they were working to resolve issues with the online outage reporting system. Eversource is asking customers who have trouble getting through to direct message the company your address on social media, email them at customerservicectelectric@eversource.com, or call 1-800-286-2000.

United Illuminating is reporting more than 103,000 power outages and most of them are in Fairfield, Milford, Shelton and Stratford.

Norwich Public Utilities reported just over 6,000 without power as of 9:30 p.m. on Tuesday.

Damage has been reported across Connecticut. A great number of trees have come down. Part of a roof on an apartment complex in Wethersfield broke off, but fortunately, there were no injuries.

Several tornado warnings were issued in parts of the state as storm cells showed rotation up at the cloud level through the afternoon. Those warnings have since expired. As of 5:20 p.m. on Tuesday, tornado watch for the state was cancelled.

Amtrak announced its Northeast corridor service between New Haven, Springfield and Boston was canceled for the rest of Tuesday.

All future departures for Tuesday (August 4) on the Cross Sound Ferry have been canceled. Service has also been suspended on the Bridgeport - Port Jefferson Ferry and the Rocky Hill Ferry. 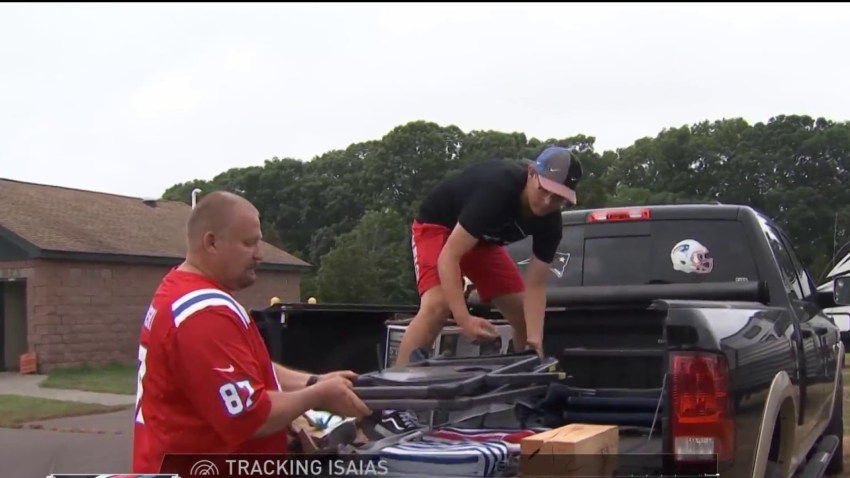 Isaias made landfall overnight as a category one hurricane in North Carolina. The storm has since been downgraded to a strong tropical storm as it races northeastward toward Connecticut.

You can get the latest on Isaias here.