It would be the first high-level U.S. trip to Kyiv since before the war began on Feb. 24

The U.S. secretaries of state and defense met Sunday night with Ukrainian President Volodymyr Zelenskyy in the highest-level visit to the country’s capital by an American delegation since the start of Russia's invasion.

The secretive meeting with U.S. Secretary of State Antony Blinken and U.S. Defense Secretary Lloyd Austin, which was confirmed by a senior Ukrainian official, came as Ukraine pressed the West for more powerful weapons against Russia's campaign in the Donbas region of eastern Ukraine, where Moscow's forces sought to dislodge the last Ukrainian troops in the battered port of Mariupol.

“Yes, they’re meeting with the president. Let’s hope something will be decided on further help,” Ukrainian presidential adviser Oleksiy Arestovych told Russian lawyer and activist Mark Feygin on his YouTube show “Feygin Live.” The United States has not yet commented.

Reporters who accompanied Austin and Blinken to Poland were barred by Pentagon and State Department officials from reporting the Kyiv visit until the two men physically left Ukraine. U.S. officials cited security concerns.

Before the session with Blinken and Austin, Zelenskyy said he was looking for the Americans to produce results, both in arms and security guarantees. 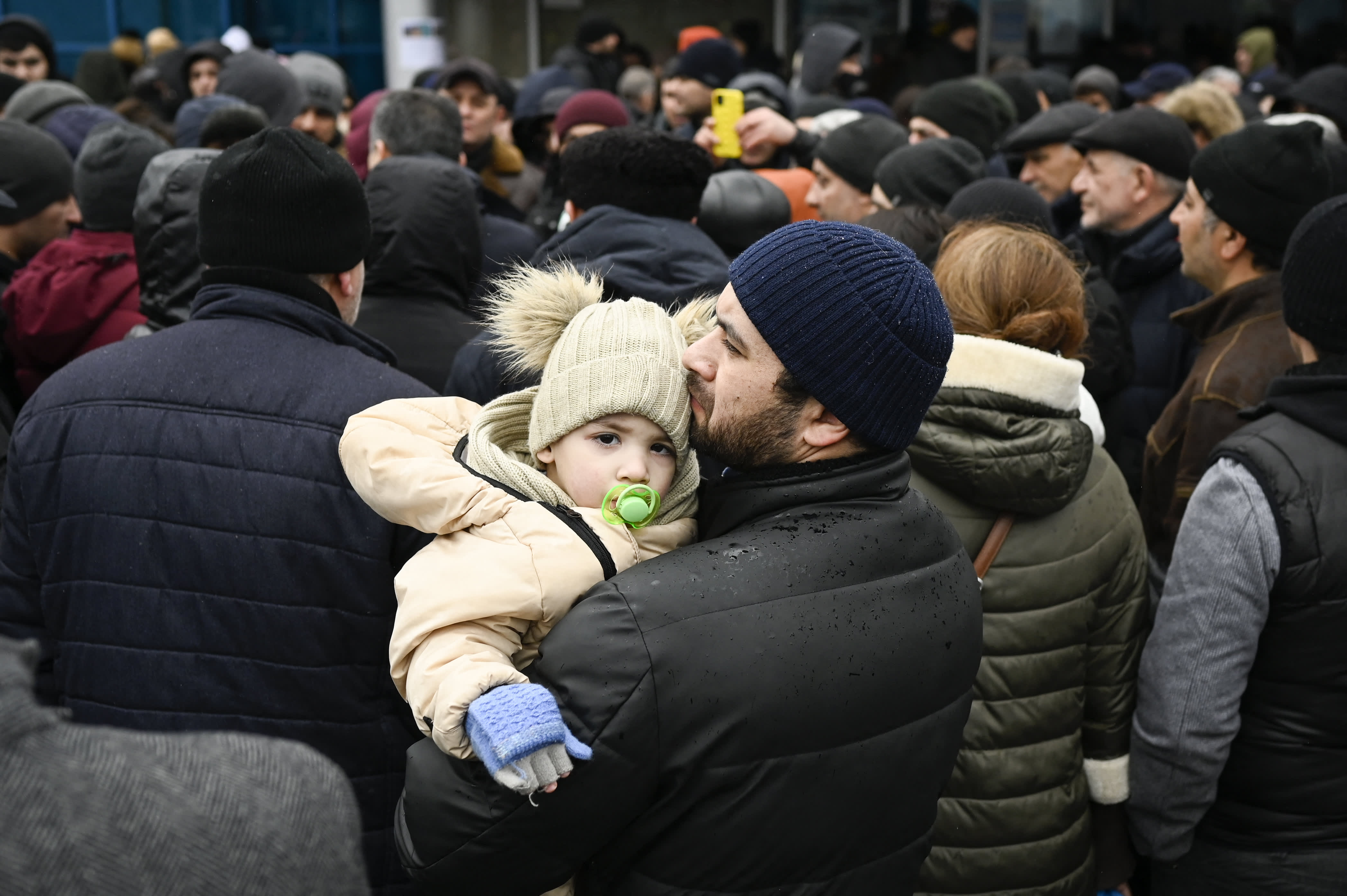 Tiny, Landlocked Moldova Struggles to Deal With the Fallout of Russia's War on Ukraine 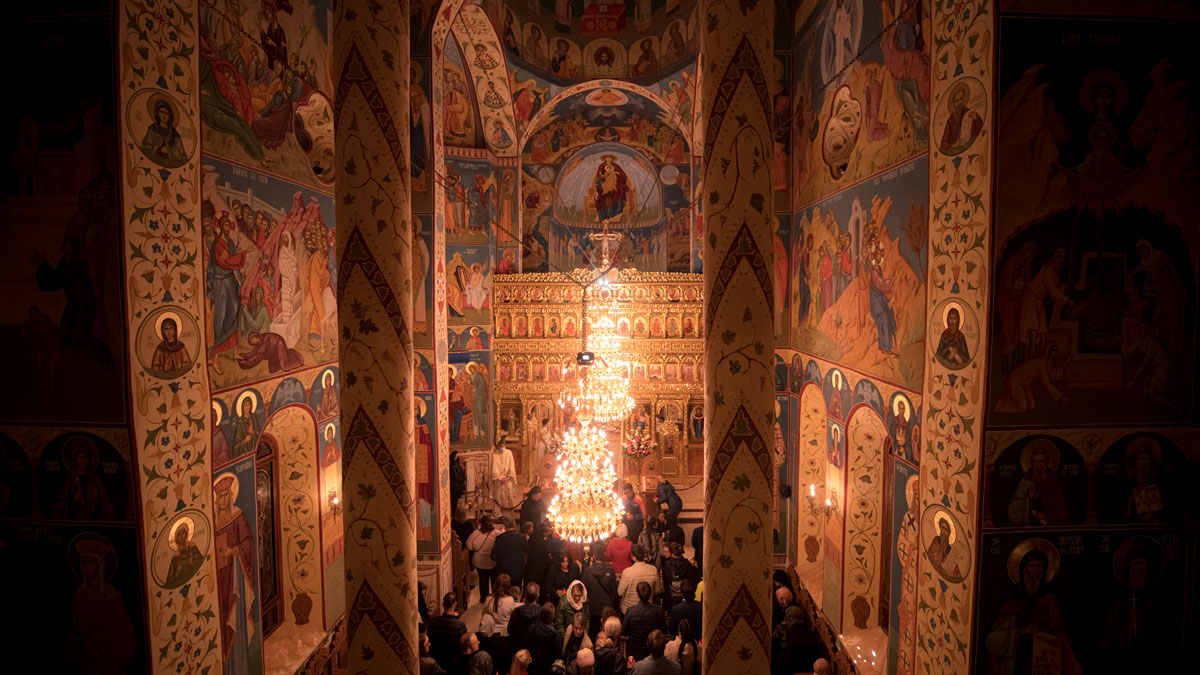 Far From Home, Ukrainian Refugees Pray at Easter for Peace

Zelenskyy’s last face-to-face meeting with a top U.S. official was Feb. 19 in Munich with Vice President Kamala Harris, five days before Russia’s invasion. While the West has funneled military equipment to Ukraine, Zelenskyy has stressed repeatedly that his country needs more heavy weapons, including long-range air defense systems and warplanes.

In an apparent boost for Ukraine, polling agencies said FrenchPresident Emmanuel Macron would win reelection over far right candidate Marine Le Pen, who has faced questions about her ties to Moscow. The result was hailed by France’s allies in the European Union as a reassuring sign of stability and continued support for Ukraine. France has played a leading role in international efforts to punish Russia with sanctions and is supplying weapons systems to Ukraine.

Still, the war cast a shadow over celebrations. In the northern village of Ivanivka, where Russian tanks still littered the roads, Olena Koptyl said "the Easter holiday doesn’t bring any joy. I’m crying a lot. We cannot forget how we lived.”

Since failing to capture Kyiv, the Russians have aimed to gain full control over the eastern industrial heartland,where Moscow-backed separatists controlled some territory before the war.

Russian forces launched fresh airstrikes on a Mariupol steel plant where an estimated 1,000 civilians are sheltering along with about 2,000 Ukrainian fighters. The Azovstal steel mill where the defenders are holed up is the last corner of resistance in the city, otherwise occupied by the Russians.

Zelenskyy said he stressed the need to evacuate civilians from Mariupol, including from the steel plant, in a Sunday call with Turkish President Recep Tayyip Erdogan, who is scheduled to speak later with Russian leader Vladimir Putin.

Arestovych, the Zelenskyy adviser, said Ukraine has proposed holding talks with Russia next to the sprawling steel mill. Arestovych said on the Telegram messaging app that Russia has not responded to the proposal that would include establishing humanitarian corridors and the exchange of Russian war prisoners for the fighters still in the plant.

U.N. Secretary-General Antonio Guterres is scheduled to travel to Turkey on Monday and then Moscow and Kyiv. Zelenskyy said it was a mistake for Guterres to visit Russia before Ukraine.

“Why? To hand over signals from Russia? What should we look for?” Zelenskyy said Saturday. “There are no corpses scattered on the Kutuzovsky Prospect,” he said, referring to one of Moscow’s main avenues.

Mariupol has endured fierce fighting since the start of the war because of its location on the Sea of Azov. Its capture would deprive Ukraine of a vital port, free up Russian troops to fight elsewhere, and allow Moscow to establish a land corridor to the Crimean Peninsula, which it seized from Ukraine in 2014.

More than 100,000 people — down from a prewar population of about 430,000 — are believed to remain in Mariupol with scant food, water or heat. Ukrainian authorities estimate over 20,000 civilians have been killed. Recent satellite images showed what appeared to be mass graves to the west and east of Mariupol.

Children in an underground bunker were seen receiving Easter presents in a video released Sunday by the far-right Azov Battalion, which is among the Ukrainian forces at the steel plant in Mariupol. The group’s deputy commander, Sviatoslav Palamar, said the video was shot at the plant.

One toddler is seen wearing homemade diapers made of cellophane and people are seen hanging laundry on makeshift hangers.

“Please help us,” one woman in the video said through tears, appealing to world leaders. “We want to live in our city, in our country. We are tired of these bombings, constant air strikes on our land. How much longer will this continue?”

Mykhailo Podolyak, another presidential adviser, tweeted that the Russian military was attacking the plant with heavy bombs and artillery while accumulating forces and equipment for a direct assault.

Zelenskyy over the weekend accused Russians of committing war crimes by killing civilians and of setting up “filtration camps” near Mariupol for people trying to leave the city. He said the Ukrainians — many of them children — are then sent to areas under Russian occupation or to Russia itself, often as far as Siberia or the Far East.

The claims could not be independently verified. But they were repeated by Ukrainian lawmaker Yevheniya Kravchuk on ABC’s “This Week.”

“They have pulled these people from Mariupol -- they are put to filtration camps ... it’s sort of something that can’t be happening in the 21st century,” Kravchuk said.

Zelenskyy highlighted the death of a 3-month old girl in a Russian missile strike Saturday on the Black Sea port of Odesa. The baby was among eight people killed when Russia fired cruise missiles at Odesa, Ukrainian officials said.

“The war started when this baby was 1 month old,'' Zelenskyy said. "Can you imagine what is happening? They are filthy scum; there are no other words for it."

For the Donbas offensive, Russia has reassembled troops who fought around Kyiv and in northern Ukraine. The British Ministry of Defense said Ukrainian forces had repelled numerous assaults in the past week and "inflicted significant cost on Russian forces.”

A fire erupted early Monday at an oil depot in Russia near its border with Ukraine, but Russia's Tass news agency gave no immediate cause for the blaze.

NASA satellites that track fires showed something burning at coordinates that corresponded to a Rosneft facility some 110 kilometers (70 miles) north of the Ukrainian border. Moscow previously has blamed Ukraine for attacks on the Russian region of Bryansk, which borders Ukraine.

The spiritual leaders of the world's Orthodox Christians and Roman Catholics on Sunday appealed for relief for Ukraine's suffering population.