The House Jan. 6 committee is set to hear from the caretakers of American democracy — elections workers and local officials — who fended off Donald Trump's pressure to overturn the 2020 presidential election, at times despite frightening personal attacks.

The hearings investigating the Jan. 6, 2021, attack at the U.S. Capitol resume Tuesday to probe Trump's relentless effort to undo Joe Biden's victory in the most local way — by leaning on officials in key battleground states to reject ballots outright or to submit alternative electors for the final tally in Congress. The pressure was fueled by the defeated president's false claims of voter fraud which, the panel says, led directly to the riot at the Capitol.

Embattled Georgia Secretary of State Brad Raffensperger is scheduled to testify about Trump's phone call asking him to "find 11,780” votes that could flip the state to prevent Biden’s election victory.

Raffensperger, with his deputy Gabe Sterling and Arizona’s Republican state House Speaker Rusty Bowers, are scheduled to be key witnesses, along with Wandrea “Shay” Moss, a former Georgia election worker who, with her mother, have said they faced such severe public harassment from Trump allies they felt unable to live normal lives.

“I’m appalled at what I saw,” Bowers said of the hearings in an interview Monday with The Associated Press after arriving in Washington. “I think it illuminates something we need to see big time, and take stock of ourselves. And I hope it would sober us.”

Audio of a call between President Donald Trump, members of his staff and Georgia state officials obtained by NBC News confirms the president begged, bullied and threatened Georgia Secretary of State Brad Raffensperger in an effort to overturn the state's election results. NBC's Tracie Potts reports.

The Tuesday hearing, the fourth by the panel this month, stems from its yearlong investigation into Trump’s unprecedented attempt to remain in power, a sprawling scheme that the chairman of the Jan. 6 committee has likened to an “attempted coup.”

Tuesday's focus will review how Trump was repeatedly told his pressure campaign could potentially cause violence against the local officials and their families but pursued it anyway, according to a select committee aide. And it will underscore that fallout from Trump's lies continues to this day, with elections officers facing ongoing public harassment and political challengers trying to take over their jobs.

While the committee cannot charge Trump with any crimes, the Justice Department is watching the panel’s work closely. Trump’s actions in Georgia are also the subject of a grand jury investigation, with the district attorney expected to announce findings this year.

“We will show during a hearing what the president’s role was in trying to get states to name alternate slates of electors, how that scheme depended initially on hopes that the legislatures would reconvene and bless it,” Rep. Adam Schiff, D-Calif., told the Los Angeles Times on Monday.

Schiff, who will lead much of Tuesday's session, said that the hearing will also dig into the “intimate role” the White House chief of staff, Mark Meadows, had in the plot to pressure Georgia state legislators and elections officials.

Raffensperger, Georgia's top election official, rebuffed Trump's request that he “find” enough votes to overturn Biden’s win in the state — a request caught on tape during a phone call days before the Jan. 6 attack.

During the call, Trump repeatedly cited disproven claims of fraud and raised the prospect of a “criminal offense” if Georgia officials did not change the vote count. The state had counted its votes three times before certifying Biden’s win by a 11,779 margin. Updates: Trump ‘Could Not Be Moved' Amid Violence on Jan. 6 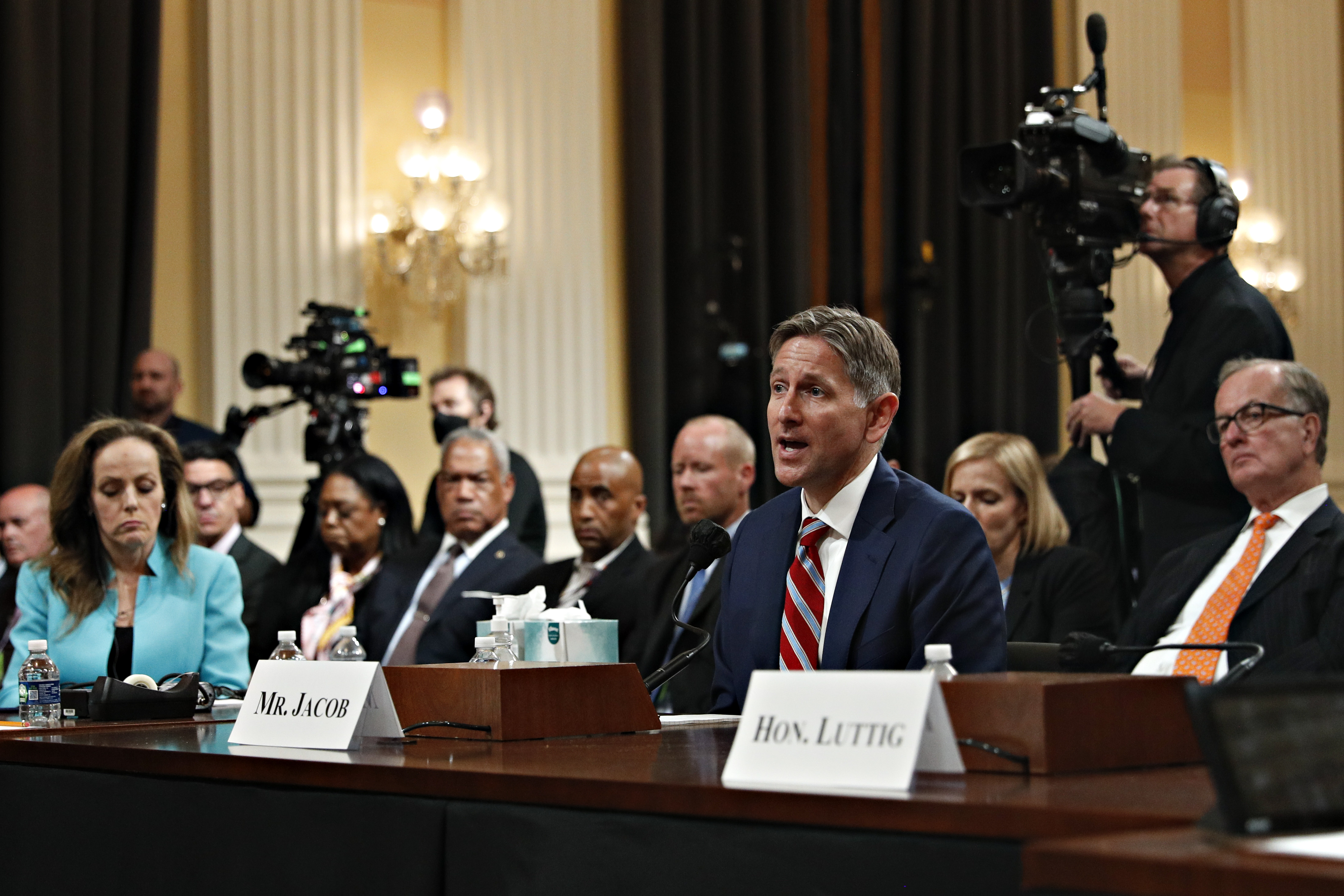 The public testimony from Raffensperger comes weeks after he appeared before a special grand jury in Georgia investigating whether Trump and others illegally tried to intervene in the state’s 2020 election, and after Raffensperger beat a Trump-backed challenger in last month’s primary election.

Sterling, Raffensperger's chief operating officer, became a notable figure in Georgia’s long post-election counting, and recounting, of the presidential ballots, with his regular updates often broadcast live to a divided nation. At one point, the soft-spoken Republican implored Americans to tone down the heated rhetoric.

“Death threats, physical threats, intimidation — it’s too much, it’s not right,” he said.

Bowers is expected to discuss the pressure he faced to overturn Arizona's results — requests from Trump advisers that the Republican state leader on Monday called “juvenile.”

In an interview with the AP after arriving in Washington ahead of the hearing, Bowers said he is expected to be asked about a call with Trump during which lawyer Rudy Giuliani floated an idea to replace Arizona's electors with those who would vote for Trump.

Bowers also revealed a second phone call with Trump in December 2020 that he said was mainly small talk, although Trump also referenced their first conversation.

Moss, who had worked for the Fulton County elections department since 2012, and her mother, Ruby Freeman, a temporary election worker, filed a defamation lawsuit in December 2021. Moss claimed conservative outlet One America News Network and Giuliani falsely spread allegations that she and her mother engaged in ballot fraud during the election. The case against OAN has since been dismissed with a settlement.

Both Bowers and Moss, along with Rep. Liz Cheney, R-Wyo., the panel's vice chair, were among recipients of this year's John F. Kennedy Profiles in Courage award “for their courage to protect and defend democracy.”

The select committee also plans Tuesday to untangle the elaborate “fake electors” scheme that was aimed at halting Biden's election win. The plan sought to have representatives in as many as seven battlegrounds — Arizona, Georgia, Michigan, Pennsylvania, Wisconsin, Nevada and New Mexico — sign certificates falsely stating that Trump, not Biden, had won their states.

Conservative law professor John Eastman, a lawyer for Trump, pushed the fake electors in the weeks after the election. Trump and Eastman convened hundreds of electors on a call on Jan. 2, 2021, encouraging them to send alternative slates from their states where Trump’s team was claiming fraud.

The fake electors idea was designed to set up a challenge on Jan. 6, 2021 when Congress met in joint session, with Vice President Mike Pence presiding over what is typically a ceremonial role to accept the states' vote tallies. But the effort collapsed, as Pence refused Trump’s repeated demands that he simply halt the certification of Biden’s win — a power he believed he did not possess in his purely ceremonial role.

The committee says it will also show Tuesday that it has gathered enough evidence through its more than 1,000 interviews and tens of thousands of documents to connect the varying efforts to overturn the election directly to Trump. At least 20 people in connection with the fake electors scheme were subpoenaed by the House panel.