Baby is a Medical Mystery

At the age of 1, Diana is just the size of a 3-month old infant.

When Diana Eldridge was born she weighed in at a healthy 6 pounds 4 ounces. It is what hasn’t happened since that has her parents and doctors searching for answers.

Little Na Na, as she is called by her siblings, is not growing.  She will turn one at the end of the month and only weighs 13 pounds and is 25 inches long, the size of an average three month old.

“At about two and three months she really hadn’t grown a whole lot. She was still pretty small. I would say not even, she wasn’t ten pounds yet,” said Joanna Eldridge, Diana’s mother.

Doctor’s initially classified her as failure to thrive, something Dr. Long, Diana’s pediatrician, says is fairly common to see.

“It’s not uncommon in pediatric practice to see children who aren’t thriving, but the list of potential causes for not thriving is tremendous,”  he said.

After undergoing numerous tests, and a few hospitalizations, doctors still aren’t sure what the problem is. What they do know is that the signs are pointing towards a possible mitochondrial disorder, something that is difficult to diagnose because there are hundreds of them.

Mitochondria are found in every cell in the body, with the exception of the red blood cells, and are responsible for creating most of the energy needed to support growth and life. 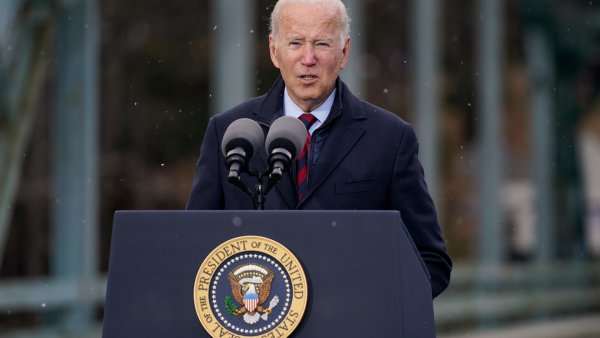 Biden Touts Savings on Insulin and Other Drugs for Americans

Dr. Sally Rosengren is a genetics specialist at UCONN Health Center and Connecticut Children’s Medical Center. She has been following Diana’s case and says the possibility exists that there might never be an exact answer as to what is wrong with her.

“In my field, which is genetics, it’s an all too frequent occurrence that we just don’t have an answer,” Dr. Rosengren said.

What they do know, is that if it is indeed a mitochondrial disorder, there isn’t a cure. Both doctors said the condition can be treated to help provide a better quality of life, but the long term outlook is not good.

“There are mitochondrial disorders that have a severe and devastating  impact early on in life, well younger than Diana is now, and there are some for whom these signs and symptoms are slower,” said Dr. Rosengren.

All of this uncertainty has Diana’s parents on edge, wondering what happens next.

“It’s hard because she’s, you know, very average. I don’t like the word normal. She’s very average thinking and she’s happy and now she’s healthy, knock on wood, and it’s just hard to know that one day she won’t be here anymore,” said Joanna Eldridge.

Dr. Rosengren said more tests will be conducted to help determine if indeed Diana does have a mitochondrial disorder and suggested Diana be seen by a mitochondrial specialist. All of this comes with added expenses, something the family is struggling with since they have four other children at home that need attention too.

The family says they will do whatever is necessary to help find an answer.

“Any expense will not be spared for her. We will go wherever we have to go to get her what she needs,” said Joanna.

The family has set up a Facebook page called Answers For Na Na to help gain support for their daughter’s cause.