‘Keep Your Eyes on Your Babies': Grandmother of Girl, 12, Who Drowned in Naugatuck River

The 12-year-old girl pulled from the Naugatuck River this evening has died, according to police.

Rescuers spent nearly two hours searching for Jada Ivory, of Naugatuck, who lost her balance and slipped into the water around 4:30 p.m. Monday while perched on a rock with some friends at Linden Park, police said. Friends watched as she was swept away by the current and tried to save her.

"Keep your eyes on your babies and grandbabies," Karen Smith, Ivory's grandmother, said.

A spokesperson for the Naugatuck Police Department said the child was unresponsive when she was loaded into an ambulance around 6 p.m. Jada was pronounced dead at Waterbury Hospital.

"She wasn't supposed to be in that water," said Karen Smith, who identified herself as the child's grandmother. "[A friend] tried to grab her, and the water took her from her."

The Republican-American reported that Ivory was a seventh-grade student at City Hill Middle School in Naugatuck and that school leaders worked Monday to put together a team of grief counselors to help students cope with the loss of one of their own.

No adults were present with the children, according to police. Officials said rescuers pulled the girl from the water about a half mile from where she fell in. 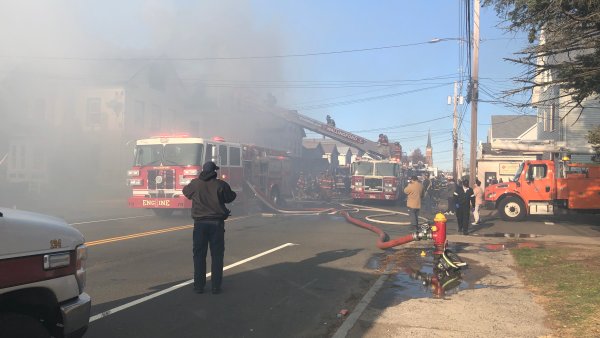 Crews at Scene of Fire in Wallingford

"Whenever there's kids and water, it's a dangerous combination," explained Naugatuck police spokesman Lt. Bryan Cammarata. "We always want to make sure there's someone there, that they're supervised."

Smith said none of the other children went into the water after Jada slipped and that the girl had only been swimming for about a year, so she wasn't a strong swimmer. At this point, it's unclear how long she was underwater before emergency personnel were called to the scene.

Smith initially told NBC Connecticut that Jada was 11 years old, but Naugatuck police said the girl was born on Nov. 13, 2002, which would make her 12.

Firefighters from Naugatuck, Beacon Falls and Oxford helped with the search, along with the police department and Thomaston Dive Team, according to police.

There is no word yet on funeral arrangements.