The vast majority of House Republicans stood by Trump during the impeachment vote. But in a sign of the president's weakening grip on the party, even some of those who opposed impeachment condemned Trump's behavior and blamed him for sparking the insurrection.

“The president bears responsibility for Wednesday’s attack on Congress by mob rioters,” said House Republican Leader Kevin McCarthy, R-Calif., who has been a staunch Trump ally.

Republican Rep. Jaime Herrera Beutler, R-Wash., said Wednesday that she supports impeaching President Donald Trump. “My vote to impeach our sitting president is not a fear-based decision,” said Herrera Beutler. "I am not choosing a side. I’m choosing truth. It’s the only way to defeat fear.”

It's a dramatic turn of events for a president who has enjoyed virtually unyielding loyalty from his party and was expected to play a key role in shaping the GOP's future. But the impeachment vote demonstrated how challenging the coming months may be for Republicans.

While some are clearly eager to move into a post-Trump era, there's still a large block that will stand with him even after he fueled a riot. Many House Republicans downplayed the significance of the insurrection and Trump's role, drawing false comparisons between the deadly storming of the Capitol by a largely white mob and isolated incidents of looting and violence related to civil rights protests last summer.

“The left in America has incited far more violence than the right,” said Rep. Matt Gaetz, a Florida Republican who was among the 197 who opposed impeachment.

Rep. Jim Himes, D-Conn., implored his Republican colleagues to consider their own legacy in deciding whether to cast a vote to impeach President Donald Trump, saying, “Where he goes in history, you go in history.”

Still, the stunning nature of the mob violence shook many lawmakers. Rep. Liz Cheney, the No. 3 Republican in the House, gave rank-and-file conservatives the green light to abandon Trump in a scathing statement on the eve of the vote.

"There has never been a greater betrayal by a president of the United States of his office and his oath to the Constitution,” she said.

In a note to his fellow Republican senators on Wednesday, McConnell confirmed that he had not ruled out voting to convict him in the upcoming Senate trial, which will spill into Biden's presidency.

In a 232-197 vote, the U.S. House of Representatives voted Wednesday to impeach President Donald Trump, charging him with "incitement of insurrection."

“While the press has been full of speculation, I have not made a final decision on how I will vote and I intend to listen to the legal arguments when they are presented to the Senate," McConnell said.

McConnell also called major Republican donors this weekend to gauge their thinking about Trump and was adamantly told that Trump had clearly crossed a line. McConnell told them he was through with Trump, said the strategist, who demanded anonymity to describe McConnell’s conversations. The New York Times first reported McConnell’s views on impeachment on Tuesday.

A growing collection of corporations, many of them reliably Republican donors, have promised to stop sending political donations to any of the 147 Republicans who perpetuated Trump’s false claims of election fraud by voting to reject Biden’s victory last week.

The president's remaining allies warn that Republicans who cross him publicly risk a conservative backlash in their next elections.

In a White House video released after the House voted to impeach President Donald Trump for a second time on Wednesday, Trump said he condemned the violence at the U.S. Capitol riot. “I want to be very clear,” Trump said. “I unequivocally condemn the violence that we saw last week, violence and vandalism have absolutely no place in our country, and no place in our movement.”

It’s unclear whether the chaos in Washington represents an existential threat to the party, but it almost certainly threatens to undermine the GOP’s short-term political goals. History suggests that Republicans, as the minority party in Washington, should regain control of the House or Senate in 2022.

Trump made no public appearances on Wednesday. But since last week's deadly attack, he has publicly and privately denied any responsibility for the insurrection.

During a brief trip to the U.S.-Mexico border on Tuesday, he offered those who support impeachment an ominous warning: “Be careful what you wish for.” 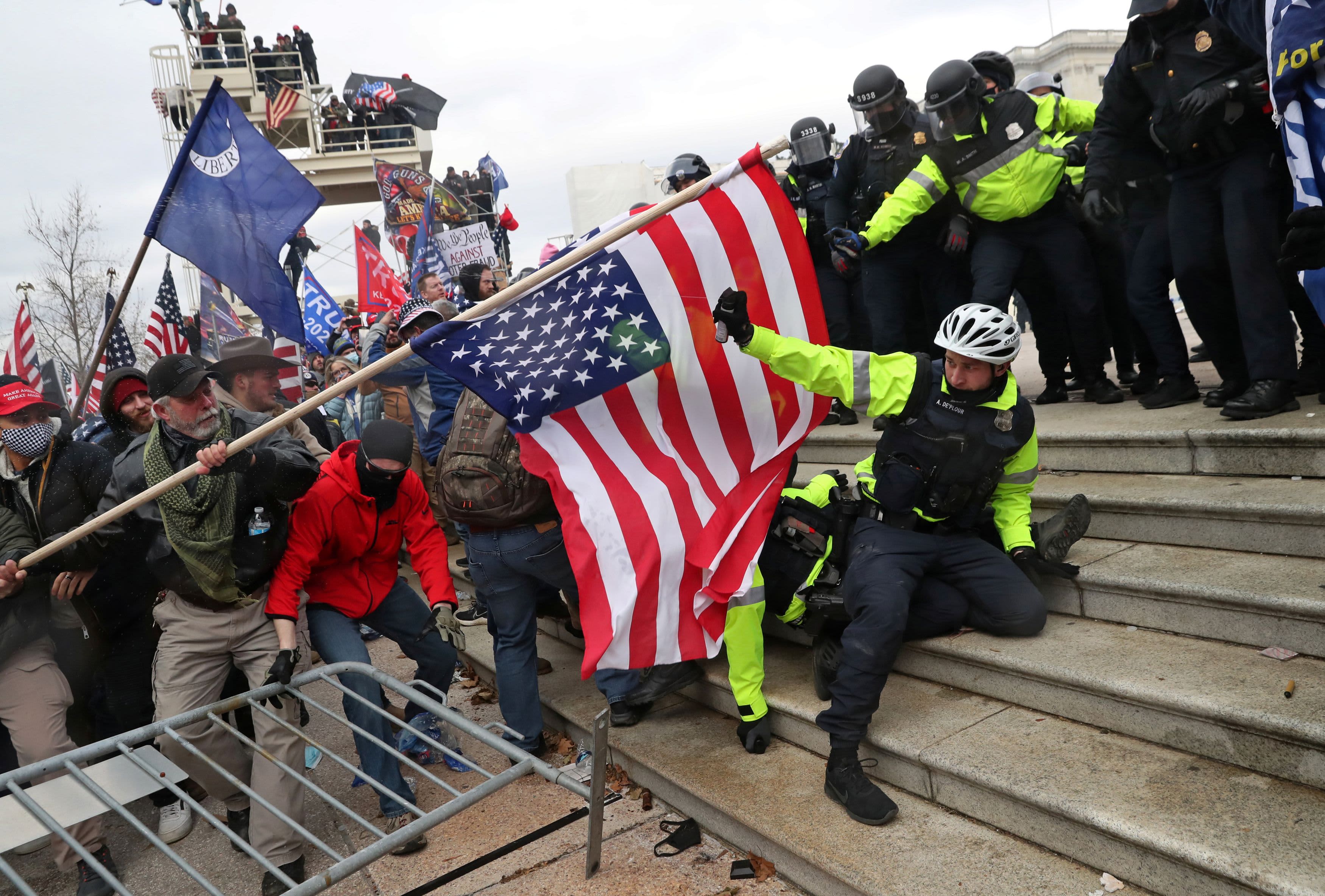 Capitol Riot Reaction: Corporations and the Future of Political Donations Shortly before the House's final vote, he issued a written statement calling on his supporters not to engage in any more violence in the rounds of new protests planned for the coming days.

“I call on ALL Americans to help ease tensions and calm tempers," Trump wrote.

At the same time, a collection of ambitious Republicans are trying to position themselves to run for the White House in 2024. They are also contending with Trump's legacy.

One of them, Maryland Gov. Larry Hogan, reminded reporters on Tuesday that he's condemned the Trump presidency from the very beginning.

“The United States and the U.S. Congress have faced down much greater threats than the unhinged crowd we saw today,” Senate Majority Leader Mitch McConnell, R-Ky., said on Wednesday. “We’ve never been deterred before, and we will not be deterred today.”

“I’ve been in the same place I’ve been for the whole four years. A lot of people have just changed their position,” Hogan said, while vowing not to leave the GOP. “I don’t want to leave the party and let these people who did a hostile takeover four years ago take over.”

Despite Hogan's confidence, he is far less popular among Trump's loyal base — a group likely to hold great sway in the selection of the party's next presidential nominee — than the likes of Sens. Ted Cruz of Texas and Josh Hawley of Missouri, two other 2024 prospects who voted to reject Biden's victory last week, even after the uprising.

“Republican leaders do not know how to move forward,” Republican pollster Frank Luntz said. “Everybody’s afraid that Donald Trump will tell people to come after them, but they also realize they’re losing the center of America. They’re trapped.”

Associated Press writers Jill Colvin in Alamo, Texas, and Alan Fram and Zeke Miller in Washington contributed to this report.