Biden marked his first 100 days in office as the nation pushes out of a menacing mix of crises, making his case before a pared-down gathering of mask-wearing legislators because of pandemic restrictions

President Joe Biden declared Wednesday night in his first address to a joint session of Congress that “America is rising anew," and pointed optimistically to the nation's emergence from the pandemic as a vital moment to rebuild the U.S. economy and fundamentally transform government roles in American life.

Biden marked his first 100 days in office as the nation pushes out of a menacing mix of crises, making his case before a pared-down gathering of mask-wearing legislators because of pandemic restrictions.

Speaking in highly personal terms while demanding massive structural changes, the president urged a $1.8 trillion investment in children, families and education to help rebuild an economy devastated by the virus and compete with rising global competitors.

His speech took place in a setting unlike any other presidential address in the familiar venue, with the U.S. Capitol still surrounded by fencing after the building was stormed in January by insurrectionists protesting his election. The nationally televised ritual of a president standing before Congress for the first time was one of the most watched moments of Biden's presidency so far, a chance to sell his plans to voters of both parties, even if Republican lawmakers prove resistant.

Vice President Kamala Harris and Speaker of the House Nancy Pelosi made history Wednesday when they were seated behind President Joe Biden’s first address to a joint session of Congress. It’s the first time two women sit behind a U.S. president during an address to Congress. “It’s about time,” Biden said.

“America is ready for takeoff. We are working again. Dreaming again. Discovering again. Leading the world again. We have shown each other and the world: There is no quit in America,” Biden said.

“I can report to the nation: America is on the move again,” he said. “Turning peril into possibility. Crisis into opportunity. Setback into strength.”

This year’s scene at the front of the House chamber had a historic look: For the first time, a female vice president, Kamala Harris, was seated behind the chief executive. And she was next to another woman, House Speaker Nancy Pelosi, both clad in pastel.

The first ovation came as Biden greeted, “Madam Vice President.” He added “No president has ever said those words from this podium, and it’s about time.”

The scene was familiar yet strange, with members of Congress spread out, a sole Supreme Court justice in attendance and many Republicans citing “scheduling conflicts” to stay away. There was no need for a “designated survivor,” with so many Cabinet members not there, and the chamber was so sparsely populated that individual claps could be heard echoing off the walls.

President Joe Biden called on Congress to come together to enact police reform, referring to the George Floyd Justice in Policing Act that recently passed the U.S. House. “We need to work together to find a consensus, but let’s get it done next month, by the first anniversary of George Floyd’s death,” Biden said.

Biden was upbeat and forceful.

“I have never been more confident or more optimistic about America,” he said. “We have stared into an abyss of insurrection and autocracy — of pandemic and pain — and ‘We the People’ did not flinch.”

He repeatedly hammered home how his plans would put Americans back to work, restoring millions of jobs lost to the virus. He laid out a sweeping proposal for universal preschool, two years of free community college, $225 billion for child care and monthly payments of at least $250 to parents. His ideas target frailties that were uncovered by the pandemic, and he argues that that economic growth will best come from taxing the rich to help the middle class and the poor.

For Biden, whose moment has been nearly a half century in the making, his speech also provided an update on combating the COVID-19 pandemic he was elected to tame, showcasing hundreds of millions of vaccinations and relief checks delivered to help offset the devastation wrought by a virus that has killed more than 573,000 people in the United States. He also championed his $2.3 trillion infrastructure plan, a staggering figure to be financed by higher taxes on corporations.

Unimpressed, Sen. Tim Scott of South Carolina said in the Republicans’ designated response that Biden was claiming too much credit in fighting the pandemic and reviving the economy.

“This administration inherited a tide that had already turned,” Scott said. “The coronavirus is on the run.”

Seizing an opportunity born of calamity, Biden has embraced major action over incremental change. But he will be forced to thread a needle between Republicans who cry government overreach and some Democrats who fear he won’t go big enough.

The Democratic president's strategy is to sidestep polarization and appeal directly to voters. His prime-time speech underscored a trio of central campaign promises: to manage the deadly pandemic, to turn down the tension in Washington in the aftermath of the insurrection and to restore faith in government as an effective force for good.

More on Biden's Address to Congress: 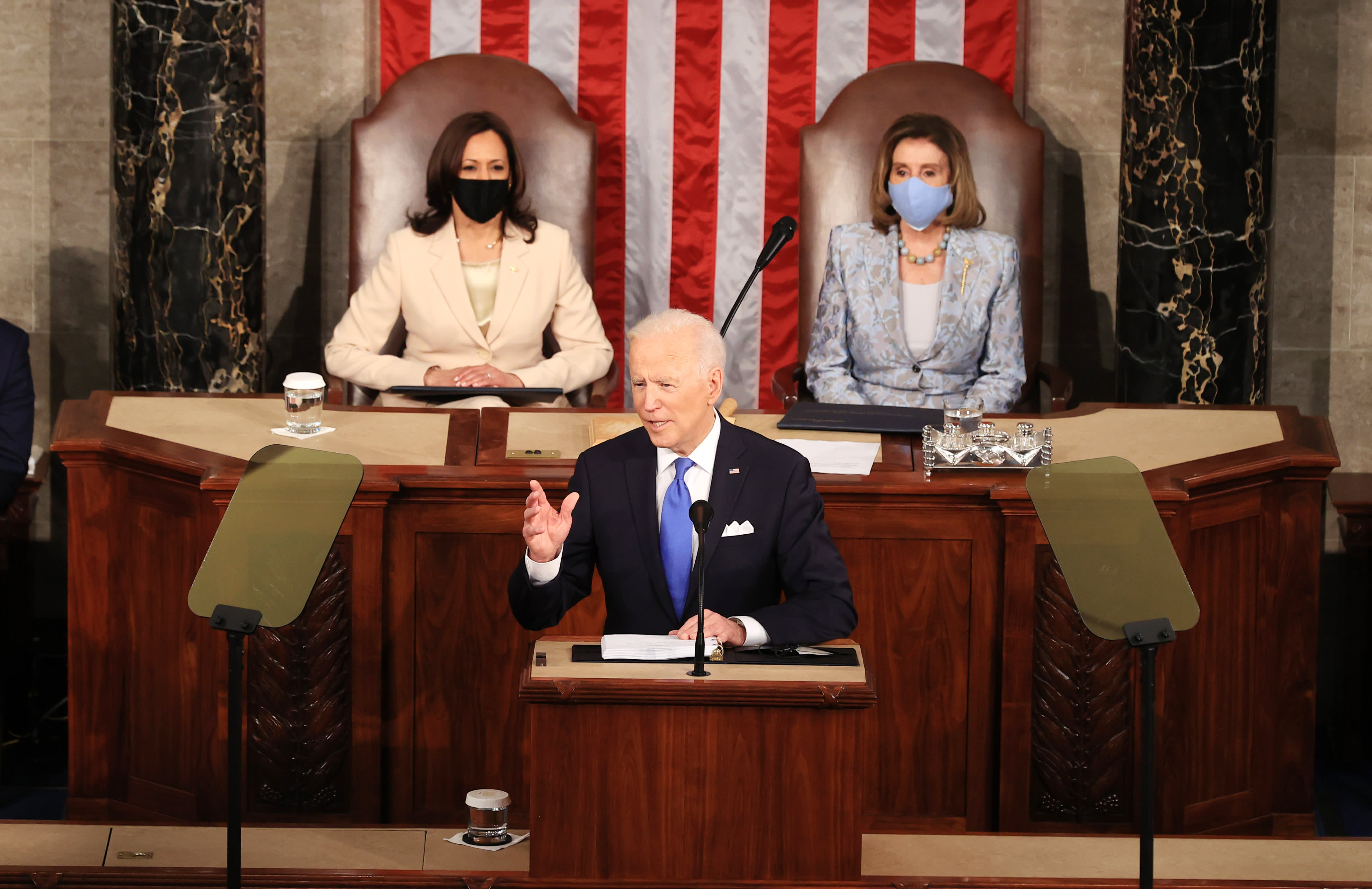 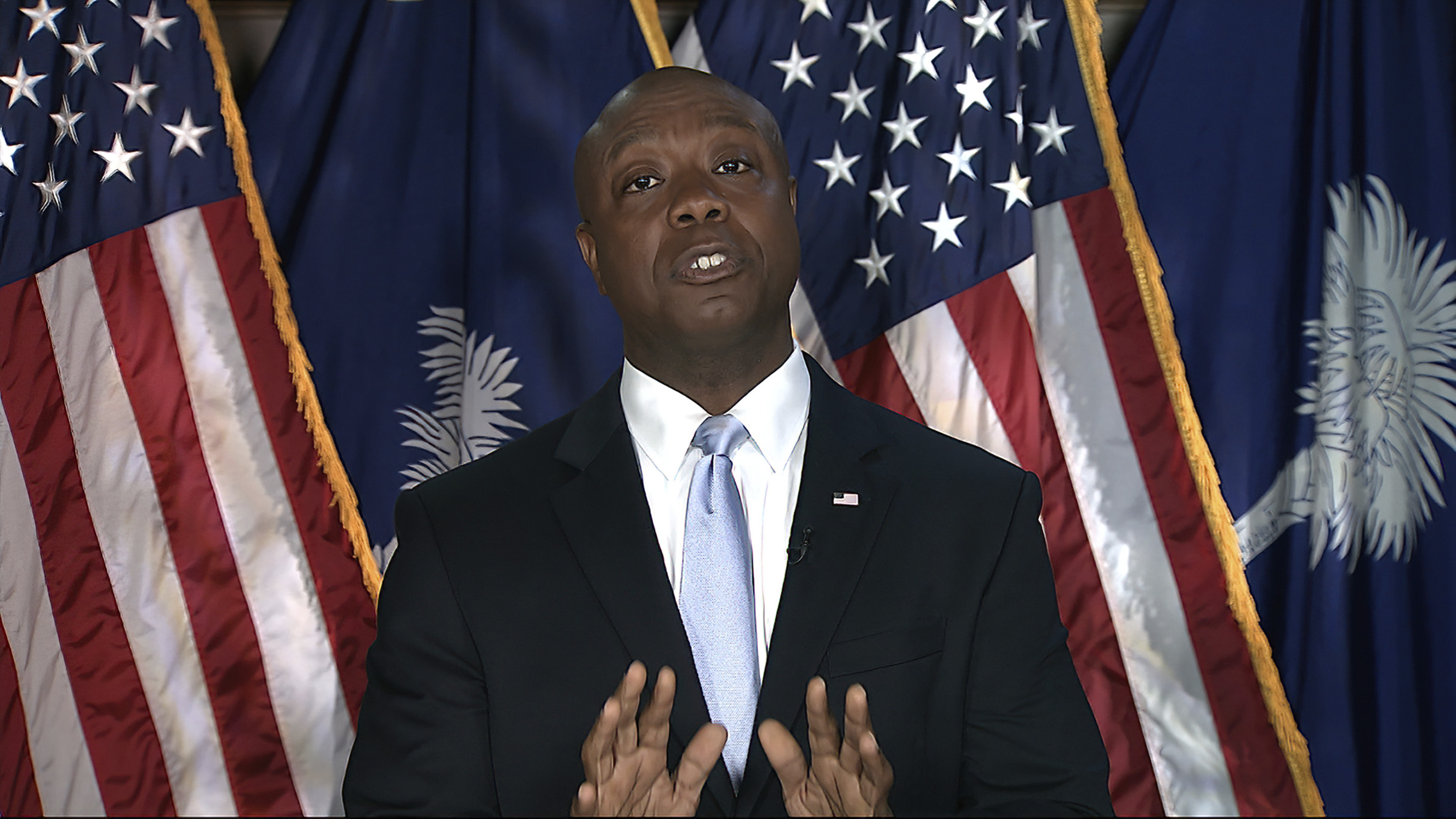 In GOP Rebuttal, Sen. Scott Says ‘America Is Not a Racist Country'

Biden also was addressing an issue rarely confronted by an American president, namely that in order to compete with autocracies like China, the nation needs “to prove that democracy still works” after his predecessor's baseless claims of election fraud and the ensuing attack on the U.S. Capitol.

No American politician has more familiarity with the presidential address to Congress than Biden. He spent three decades in the audience as a senator and eight years as vice president seated behind President Barack Obama during the annual address.

Yet the desire for swift action is born from political necessity. Biden understands that the time for passing his agenda could be perilously short given that presidents' parties historically lose congressional seats in the midterm elections, less than two years away. The Democrats’ margins are already razor-thin.

He spoke against a backdrop of the weakening but still lethal pandemic, staggering unemployment and a roiling debate about police violence against Blacks. Biden also used his address to touch on the broader national reckoning over race in America, and to call on Congress to act on prescription drug pricing, gun control and modernizing the nation’s immigration system.

In President Biden’s first address to a joint session of Congress on Wednesday night, he opened by declaring, “America is on the move again.”

In his first three months in office, Biden has signed a $1.9 trillion COVID-19 relief bill — passed without a single GOP vote — and has shepherded direct payments of $1,400 per person to more than 160 million households. Hundreds of billions of dollars in aid will soon arrive for state and local governments, enough money that overall U.S. growth this year could eclipse 6% — a level not seen since 1984. Administration officials are betting that it will be enough to bring back all 8.4 million jobs lost to the pandemic by next year.

A significant amount proposed Wednesday would ensure that eligible families receive at least $250 monthly per child through 2025, extending the enhanced tax credit that was part of Biden’s COVID-19 aid. There would be more than $400 billion for subsidized child care and free preschool for all 3- and 4-year-olds.

Another combined $425 billion would go to permanently reduce health insurance premiums for people who receive coverage through the Affordable Care Act, as well a national paid family and medical leave program. Further spending would be directed toward Pell Grants, historically Black and tribal institutions and allow people to could attend community college tuition-free for two years.

Funding all of this would be a series of tax increases on the wealthy that would raise about $1.5 trillion over a decade.

Biden wants to raise the top tax rate on the most affluent families from 37% to 39.6%. People earning in excess of $1 million a year would see their rate on capital gains — the profits from a sale of a stock or home — nearly double from 20% to 39.6%, which would mean the wealthiest Americans could no longer pay at a lower rate than many families who identify as middle class.

He took aim at a hallmark achievement of the Trump presidency, saying the 2017 tax cuts failed to deliver on Republicans’ promise of strong growth. It was a recognition of how narrow the common ground is between the two parties.

“When you hear someone say that they don’t want to raise taxes on the wealthiest 1% and on corporate America – ask them: whose taxes are you going to raise instead, and whose are you going to cut?” Biden said.

Republican lawmakers in Congress so far have balked at the price tags of Biden's plans, complicating the chances of passage in a deeply divided Washington.