For Lebanese, Recovery Too Heavy to Bear a Month After Blast

A month after Beirut’s devastating explosion, Ghassan Toubaji still sits under a gaping hole in his ceiling — he can look up through the dangling plaster, wires and metal struts and the broken brick roof and see a bit of sky.

The 74-year-old survived the Aug. 4 blast with bruises, but his fall from its impact worsened his heart and blood circulation diseases. Between that and Lebanon’s crumbled economy, he can’t go back to work.

He used the last of the dollars his wife had been hoarding — a precious commodity as the local currency’s value evaporates — to fix the windows shattered by the explosion.

Teams of volunteers, a symbol of the help-each-other spirit that’s grown up from the failures of Lebanon’s corrupt political class, came by his apartment and assessed the damage. They put plastic on the windows and promised glass for free eventually. Four weeks later they hadn’t come back.

An organization in Lebanon has been helping reunite owners and pets after a large explosion decimated Beirut, killing at least 170 people and making over 300,000 homeless

With a sweet patient smile, he said he appreciated how well meaning the young volunteers were. But he couldn’t wait — with humidity reaching 80% some days and the summer sun directed all day into his apartment, he had to do something.

“Our house is hot as hell,” he said, sitting in baggy shorts and a tank top as he watched the news in the room with the hole overhead.

Lebanese families are still struggling with rebuilding in the wake of the massive explosion centered at Beirut’s port. Many, already unable to make ends meet because of the country’s economic meltdown, now can’t bear costs of making homes livable. Frustration is high, with the state almost nowhere to be seen and promised international help slow in coming.

With winter and the rainy season only weeks away, aid groups are concerned they may not have time or resources for the mammoth job of repairing and rebuilding.

Around 200,000 housing units, approximately 40,000 buildings, were damaged in the blast, 3,000 of them so severely they are currently uninhabitable, according to U.N. estimates.

Excavators began sifting through the rubble at the site of the Beirut explosion, one week after a port warehouse exploded, killing 163 people and leaving 250,000 homeless.

The loss of homes is just one of the indignities from the explosion, the result of nearly 3,000 tons of improperly stored and rotting ammonium nitrates igniting at the port. The blast, one of the strongest non-nuclear explosions ever recorded, killed more than 190 and injured thousands.

A month later, Beirut is still a wounded, grieving city struggling with the calamity that abruptly altered so many lives. Tall buildings still face the port with blown-up facades. Hundreds-year old stone buildings have gaping holes and missing balconies. Features of small streets parallel to the port have been totally erased. Residents walk around with patched up eyes, bandaged arms or on crutches.

Social media are still awash with people sharing their stories and videos and recounting their persisting trauma. Pictures of the dead are plastered in neighborhoods. “He is a victim, not a martyr,” read one poster, rebuffing authorities’ attempts to give the dead that esteemed label of self-sacrifice for a cause, seen as a way to water down their own responsibility.

The United Nations appealed for $344.5 million in emergency funds to last until November, and a donor conference was co-hosted by France and the U.N. days after the blast. But so far only 16.3% of the funds have been received.

Dr. Israa Seblani was posing for a photographer and videographer in a town square in Beirut when Tuesday’s explosion occurred.

Of the total pledges, $84.5 million is meant for securing and repairing shelter, but only $1.9 million has been dispersed, said Elena Dikomitis, advocacy adviser for Norwegian Refugees Council for Lebanon.

Aid groups worry the funds are not robust enough.

“The cold and rain could start as early as October,” she said. “For sure, tens of thousands of houses can’t be repaired in time. That we know for sure, even with all the ongoing efforts.”

The NRC is working in two of the hardest-hit neighborhoods, Karantina and Mar Mikhail. It is targeting 12,400 people for help with shelter and 16,800 for water, sanitation and hygiene interventions before March 2021, she said.

Lebanon already has highly vulnerable populations that need help for shelter in winter, including more than 1 million Syrian refugees, the majority of whom live in substandard conditions and now risk being overlooked. “On top of those people ... you also now have all the new homeless of Beirut,” Dikomitis said.

The international community, aware of public anger in Lebanon over rampant corruption, has said it would funnel money away from government institutions and work only through international organizations and the U.N.

Many Beirutis say they are sick of hearing about aid on the way, as they struggle to stay above water in the financial crisis.

The currency has crashed in value to the dollar, and banks locked down dollar accounts to prevent capital flight. Prices have skyrocketed, and imports are limited in a country that imports nearly everything. Unable to access their money, even the most able are struggling to secure materials for repairs.

“Nobody has helped us with even a nail,” said Robert Hajj, owner of a scooter center wrecked in the blast. “Each day’s delay is deteriorating our companies ... Our money is blocked in the banks.”

With little to no safety net, elderly like Toubaji are hit hard. 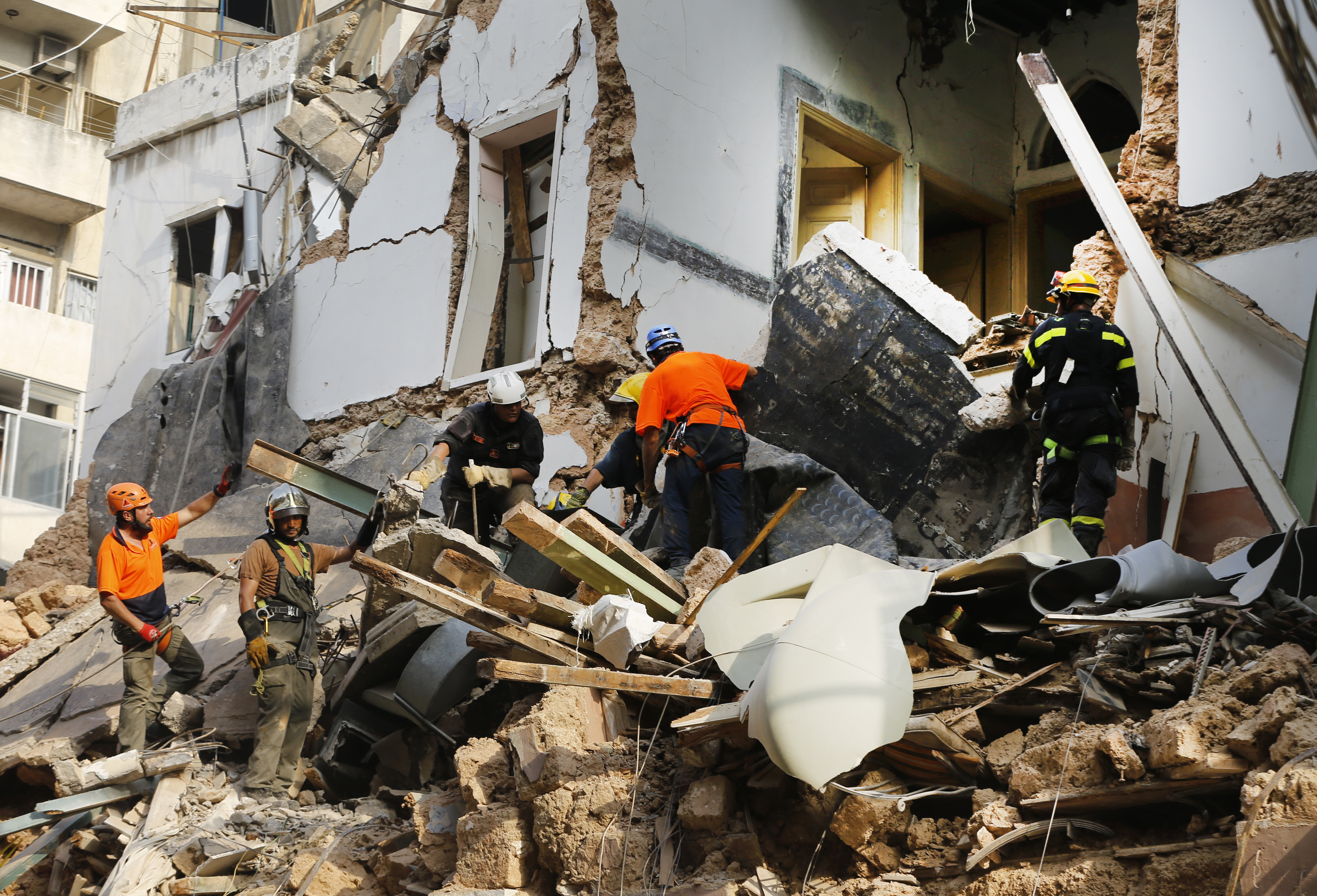 A Month On, Signal in Beirut Rubble Raises Hope for Survivor 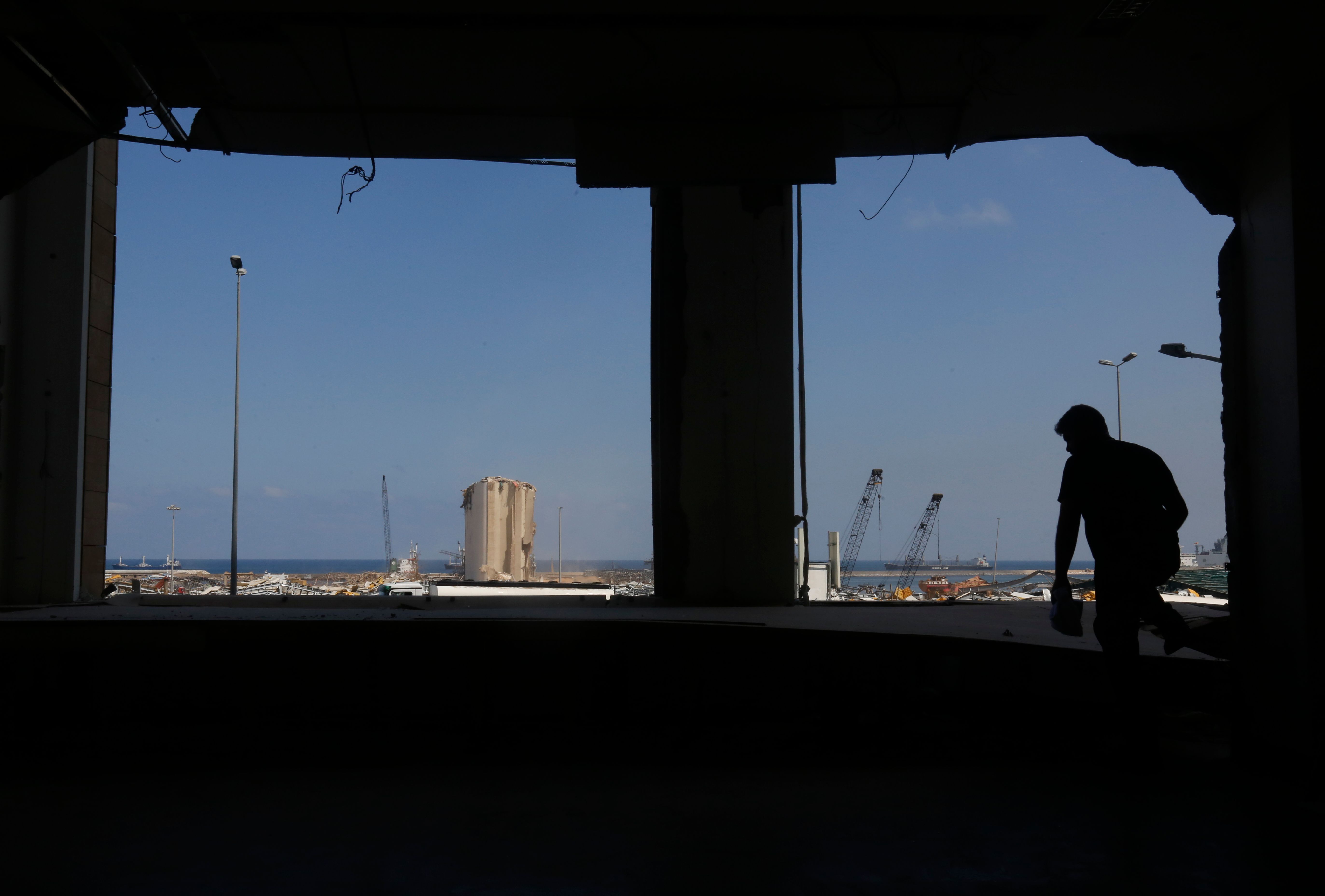 ‘End of the World': Countdown to Beirut's Devastating Blast

He has no pension, no social or medical insurance, so he and his wife, both over 70, had to keep working. Toubaji worked charging fees from people to get papers signed for them at the Finance Ministry, wading through the bureaucracy.

He was forced to stay home by the slump and the ensuing nationwide protests that began in October. His wife, a seamstress, is also virtually out of work.

They have been eating away at the 30 million Lebanese pounds in their bank account. Overnight in the financial crisis, their savings’ value dropped from $20,000 to just above $3,000. His wife had kept some dollars at home, away from the banks, but that went into fixing their windows.

If the ceiling is not fixed, rain will come in. Or worse — a few days ago brick from a neighbor’s damaged house hit his roof and knocked a chunk more of the broken ceiling down onto a sofa. His home’s main wooden door also remains damaged, its splintered shards glued back in place.

“I don’t have a leader that I follow to chase and secure money,” Toubaji said, referring to Lebanon’s sectarian-based patronage system that fills the place of the absent state.

When the blast happened, Toubaji fell on his face, and shattered glass covered his back. He now walks slowly, worried his knees cannot keep him up straight.

He said Lebanon, too, had fallen because of violence and conflict before and every time, it managed to stand up “and good people came to help.”

This time, he is not so sure.

Politicians “have robbed the country and the banks are broke. Who would help the country get up on its feet this time?”